Please ensure Javascript is enabled for purposes of website accessibility
Log In Help Join The Motley Fool
Free Article Join Over 1 Million Premium Members And Get More In-Depth Stock Guidance and Research
By Maxx Chatsko - May 19, 2014 at 10:00AM

A class of insecticides has long been claimed to be at the root of the demise of honey bee populations. Do the data show that Monsanto, Bayer, and Syngenta are to blame?

Are we on the verge of losing nature's pollinators? Source: Muhammad Mahdi Karim/ Wikimedia Commons.

A new Harvard study claims to have found a link between neonicotinoids, a class of insecticides that disrupts the neural function of various types of insects, and the declining populations of honey bees. Long suspected of being responsible for colony collapse disorder, neonics may have finally been proven as the smoking gun activists have been looking for. Of course, as is often the case, many headlines seized on the emotional opportunity presented by the conclusions of the study rather than remaining critical of the research methods used.

There are some major red flags being thrown up by beekeepers about the methodology employed in the study. And no, they aren't being paid off by companies such as Bayer (BAYR.Y -4.39%), Syngenta (NYSE: SYT), and Monsanto (MON). They simply know their craft and want to nudge the discussion back to the facts. What do investors and consumers need to know about the study?

Important background information
It's critical to go over a few things before we dig into the study. First, Monsanto doesn't produce a single neonicotinoid, although it is developing a new portfolio of products that could save honey bees. Bayer CropScience and Syngenta combine to produce four of the eight neonicotinoids on the market today, which account for roughly 85% of sales for the class of pesticides.

Second, honey bee populations face a host of challenges each year, but the notion that we're witnessing a catastrophic decline simply isn't true. The United States Department of Agriculture compiles an annual report on the estimated number of honey bee colonies in the U.S., as reported by beekeepers. The data don't paint an apocalyptic picture. 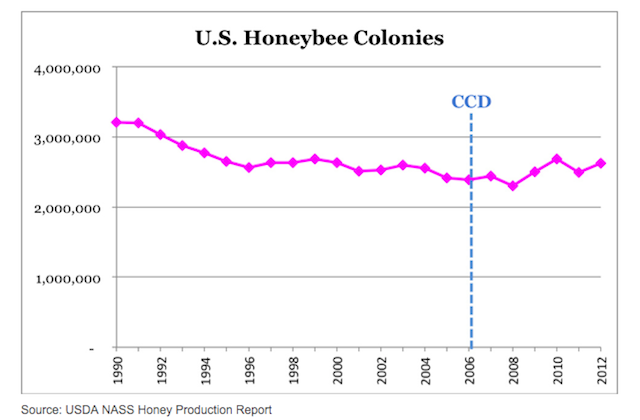 Third, you may want to think twice about protesting neonicotinoids under the guise that they somehow harm mammals. That is, without sufficient data to back up such claims. The truth is, if you own a cat or dog and protect it against fleas or ticks with Advantage products, then you're applying Bayer's imidacloprid -- the world's most successful neonic and the active ingredient of the Advantage product line -- directly to your beloved family pet.

I'll bet Fido is doing just fine. Besides, neonics are much less toxic than the classes of insecticides they replaced (that's why the market shifted to the class of molecules in the first place).

Beekeepers take on the study
The beef with the leading researcher of the study, Dr. Chensheng Lu, actually dates back to a flawed study from 2012 that claimed the cause of colony collapse disorder was simply the application of imidacloprid to corn, which then ended up in the high fructose corn syrup being fed to honey bees. Few beekeepers or scientists supported the study. The uproar made Dr. Lu attempt to replicate similar results in the recent study by feeding honey bees high fructose corn syrup laced with the same neonic. Unfortunately, prominent beekeepers are once again questioning the results from the latest research (link opens PDF).

Biologist and beekeeper Randy Oliver is one of the loudest critics. It's important to remember that insecticides can certainly harm bee colonies, so it's in Oliver's interest to stay current on best practices and reduce the damage caused to his colonies and livelihood. You can read some of the flaws in Lu's approach on ScientificBeekeeping.com, but the most noteworthy stem from the fact that the researchers did not test for nosema parasites -- pretty important when tallying population declines. Additionally, the paper was reported in an obscure Italian journal (Bulletin of Insectology) rather than a prominent peer-reviewed publication. That does, unfortunately, carry some weight for the validity of the results.

Foolish takeaway
After reading through Randy Oliver's argument discussing the numerous flaws with Lu's study and the study itself, I don't think the researchers found anything of value. At this point, we cannot say that neonics alone are the leading contributor to honey bee population declines. That doesn't necessarily let Bayer and Syngenta off the hook for their use of neonics, or Monsanto for its use of pesticides that could have unintended effects on honey bees, but investors and consumers need to remember that multiple factors play a role in fluctuating bee populations. Parasitic fungi, parasitic mites, pesticides, temperature, and more likely combine to put pressure on honey bee colonies -- so it's irresponsible to focus on any one culprit in this case. For now, it appears that neonics are as risky as their current labels suggest. Nothing more, and nothing less.