Staples (NASDAQ: SPLS) is set to report its fiscal 2014 first-quarter earnings before the market opens on Tuesday. With the stock down more than 17% so far this year, investors are hoping for a strong Q1 to fuel a comeback in the share price. However, winter weather may have derailed sales in the quarter as fewer consumers shopped in stores and instead opted for making purchases online from sites like Amazon.com (NASDAQ:AMZN). Let's look at Wall Street's estimates for the quarter and whether Staples can deliver on those projections.

Wall Street isn't too optimistic about Staples' upcoming results. In fact, analysts expect both revenue and earnings to decline in the quarter. Specifically, the Street is looking for Staples' revenue to fall 3.4% to $5.6 billion in the first quarter, down from the $5.8 billion it earned during the same period a year ago. Meanwhile, analysts expect earnings per share of $0.21 in the period, down $0.05 from the first quarter of fiscal 2013, in which Staples earned $0.26 per share.

Unfortunately for shareholders, history isn't on Staples' side. The office supplies company has missed revenue targets for the past four consecutive quarters. Moreover, Staples' stock currently has a price-to-earnings growth ratio or PEG of 9.88 -- one of the highest in the specialty retail industry. Similar to other retailers with physical stores, Staples has been under pressure in recent years from online competitors including Amazon.

The e-commerce giant began directly competing with Staples two years ago when it launched its business-to-business supplies site: AmazonSupply.com. Because of increased competition from Amazon and other online retailers, Staples is in the process of closing underperforming locations and focusing instead on growing its e-commerce business. Last year, the company eliminated over 1 million square feet of its North American retail space by closing 40 stores and downsizing another 40 locations.

On top of this, the office supply chain has been growing its online inventory. Staples ended fiscal 2013 with 500,000 products available for sale on Staples.com, up from just 100,000 at the start of the year. While this is encouraging, it doesn't hold a flame to the 2.25 million-plus business products available today on AmazonSupply.com. 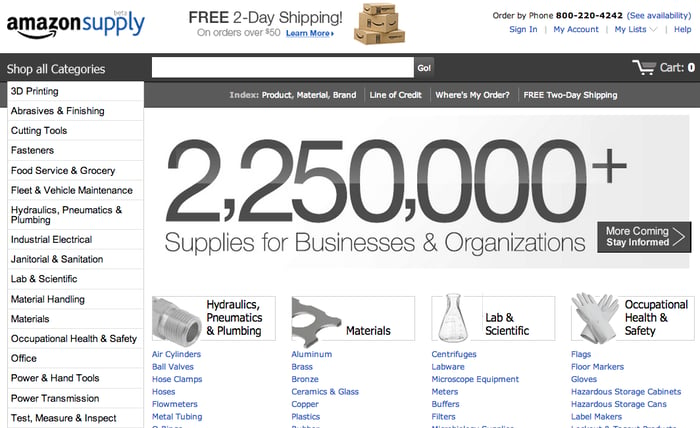 Nevertheless, Staples was able to grow sales by 10% on Staples.com in the last quarter, which is certainly a step in the right direction. Moreover, investors will want to see this number continue to grow when Staples reports results. If Staples is able to show significant growth in its e-commerce business, the market may, in fact, give its shares a lift.

A more likely scenario
Ultimately, if Staples ends up surprising investors next week, it will likely be to the downside. With Wall Street expecting earnings at the high end of Staples' forecasts, it's unlikely that the retailer will come in ahead of projections. For the first quarter of 2014, Staples said earnings should come in the range of $0.17 to $0.22 per diluted share.

Staples is in the midst of a transformation as it continues to reduce its retail footprint and drive more business to its online channel. This is a smart strategy for the retailer, though shareholders probably won't see the benefits of this restructuring before the end of 2015 -- by which time Staples' management expects to see cost savings of approximately $500 million.