The Institute for Market Transformation (IMT) has named Liberty Property Trust (NYSE:LPT) and Kilroy Realty (NYSE:KRC) Green Lease Leaders. But does that make them good options if you like dividends and want to invest with an eye toward the environment?

They're on the same page
Janelle Strand, a vice president at Kilroy, notes that green lease language, "helps ensure that tenant and landlord environmental interests are aligned..." Marla Thalheimer, the director for sustainability at Liberty, explains that the laying out of environmental responsibilities in the lease is critical to, "...ensuring a win-win outcome with the tenants."

The lease, a legal document, is a powerful tool in the property market. It dictates the landlord's and tenant's responsibilities. If it's in the lease, it better get done, because a lawsuit (or eviction notice) could be waiting in the wings if it doesn't. That's why IMT focused on this aspect of the property market when it created the Green Lease award.

Kilroy and Liberty take the environment seriously. For example, Kilroy has what it calls an environmental "vision" and Liberty has an environment "mission statement." So this award is a nice feather in each company's cap, particularly since both have a penchant for building from the ground up.

Does that make me money?
Being green is nice, but making some green is much better. Liberty's top line, for example, hasn't been particularly impressive over the last couple of years. Revenues last year were nearly 14% below the high water mark reached in 2010. But that masks some positives. 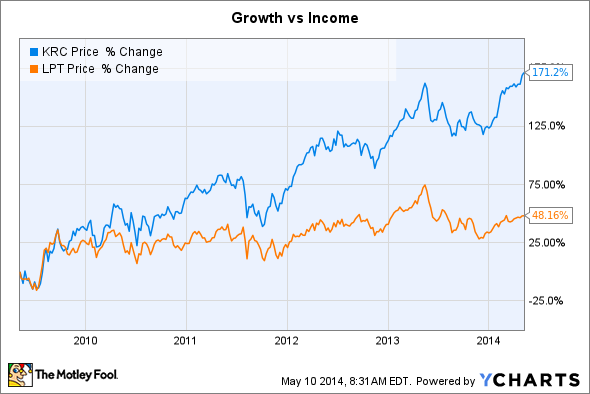 Although the shift isn't over, that was a big step in getting the REIT on a new track.

Liberty's Hankowsky continues, "We continue to see strong activity in our industrial markets and anticipate accelerating growth in earnings in the second half of 2014." Now that the portfolio is better aligned with management's goals, you should be holding Liberty to those positive words.

And the dividend, which has been stuck at $1.90 a share annually since being cut in 2009, could finally start heading higher again. With an around 5% yield, Liberty is both a green landlord and a REIT with a catalyst for a brighter future.

Kilroy was here, and now it's there
Kilroy has had better luck with its rent roll. Aside from a one-year dip in 2009, this West Coast office building owner, has seen its top line head steadily higher over the past decade.

Though saving money was a big reason for the cut, there was more involved. Since 2009, Kilroy has gone from a company with 100% of its assets in southern California to one with three core markets. Southern California now makes up 50% of the portfolio, northern California 35%, and Seattle 15%.

That's added an important level of diversification at this active asset manager hitting new highs on the transaction front. Over the last two years, the company has essentially sold ($850 million) as much as its bought ($961 million). The big difference is that it spent about $1.5 billion on construction, up materially from years past.

And Kilroy has six projects on the drawing board totaling nearly 1.4 million square feet of space. So look for green growth from the ground up to continue.

However, this construction heavy approach suggests that the dividend is likely to stay stuck at $1.40 a share annually. Thus, this 2.3% yielder is probably not the best bet for an income investors.

Being both at once
You can invest green or you can invest for income, but trying to marry the two approaches can be a little more complicated.

Liberty and Kilroy, two award wining green landlords, prove that out. That said, if you are looking for a green dividend play, Liberty is worth a deep dive.

These REITs Are Saving the Environment, One Lease at a Time @themotleyfool #stocks $LPT $KRC Next Article
Current