It's difficult to overstate the shock I'm feeling over AstraZeneca's (NASDAQ:AZN) rejection of Pfizer's (NYSE:PFE) generous offer. The floundering company is in the middle of a much needed transformation, but the commercial potential of its pipeline is full of unknowns. Upcoming patent losses and recent difficulties successfully launching new drugs have investors rightfully nervous. Let's take a look at the company's recent track record and see why the board's decision to gamble on an uncertain future rather than accept an enormous gain in the present seems mistaken.

Rose-tinted lab goggles
In an effort to inflate Pfizer's offer AstraZeneca has touted a handful of clinical-stage assets with lofty expectations. One of these is MEDI4736, an anti-PDL1 candidate that takes the brakes off the immune system, allowing it to more aggressively attack tumors. Earlier this month the company announced the beginning of a pivotal lung cancer trial with the candidate, to follow a successful phase 1 assessment.

The early stage results are promissing, but AstraZeneca's peak sales estimate of $6.5 billion annually is hard to swallow. The figure doesn't seem to account for potential pressure from other immuno-oncology drugs, many of which are in later-stage trials and may come to market earlier. Hopefully AstraZeneca will have promising data at the ASCO conference that supports the lofty sales estimate; if not, I expect we'll hear more grumbling from shareholders.

Expirations
While the future of AstraZeneca's oncology assets are uncertain, losses due to major patent expirations are imminent. Sales have fallen hard over the past couple years, and the loss of the company's top two products -- Crestor and Nexium -- will make reversing the trend increasingly difficult. 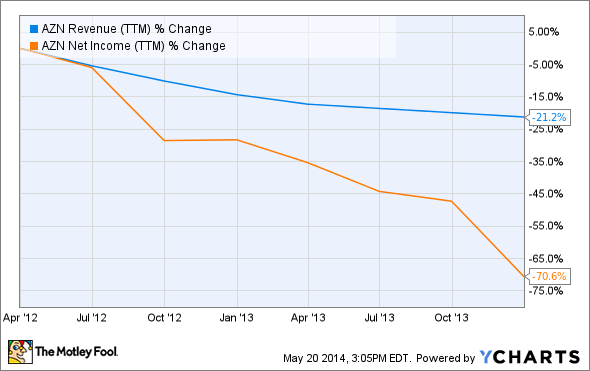 Combined the drugs comprised more than 35% of first quarter revenue. Sales of heartburn blockbuster Nexium should feel the heat of generic competition beginning next month. After winning a patent fight with Actavis last year, AstraZeneca isn't expecting its statin Crestor to lose exclusivity until May 2016.

Recent launches
With a great deal of luck AstraZeneca's clinical stage assets might begin plugging holes left by exclusivity losses a couple years from now, but the bulk of responsibility lies on recently launched products. Sadly, the company's track record for new product launches is less than inspirational.

Brilinta has been a disappointment for several reasons. US doctors have been reluctant to adopt the new medication, and a US Justice Department probe into the study that led to its approval isn't helping either. The company is predicting billions annually, but more than two-and-a-half years following FDA approval, US sales of Brilinta reached just $28 million in the first quarter.

On a brighter note, AstraZeneca's oral type 2 diabetes therapy Forxiga -- Farxiga in the US -- beat Johnson & Johnson's (NYSE:JNJ) Invokana to approval in the EU by nearly a year. Unfortunately this is another potential blockbuster off to a slow start. AstraZeneca hasn't published sales data for the drug since fully acquiring it from Bristol-Myers Squibb, but the former partner sold just $23 million of the first-in-class therapy last year.

What a Fool believes
Soriot insists the company can bring 2017 revenue in line with 2013, but even that dismal projection includes a great deal of luck. Looking forward, the clinical stage cancer immunotherapy assets have potential, but the company needs to adjust its estimates downward to account for general development and market risk. Looking back, the (at least thus-far) problematic launches of both Brilinta and Forxiga hardly inspire confidence.

Over the next several years I find it hard to believe investors will see share prices anywhere near what Pfizer is offering now. It's the combined tax advantages of a UK domicile, and potential partnership synergies make the deal worthwhile, which makes Pfizer the only company positioned to profit from a $118 billion acquisition of the transitioning behemoth. I believe this is a great opportunity -- if management doesn't squander it.