According to a Pew Research Center study released at the beginning of the year there are approximately 160,000 fast food restaurants in America that serve around 50 million people a day (that's nearly one out of every six people in this country) and which generate $110 billion in annual revenue. While nearly 3-in-10 people interviewed noted they never eat fast food, 44% of respondents admitted to eating it once per week while 14% said they eat it at least three times per week.

This fast food phenomenon has a stranglehold on American eating habits for two particular reasons.

First, it's all in the name: it's fast! There are few things that consumers value more than their time and fast food restaurants promise the consumer a quickly made meal that's customized to their liking and likely won't inconvenience their schedule.

The other factor is price. Speaking honestly, not everyone can afford to go out to eat at a casual dining restaurant on a daily basis, nor do certain consumers have the willingness to purchase groceries and cook for themselves. The solution is simple and it litters the corners of major cities and highways around the country: fast food establishments. With a relatively inexpensive menu the perceived "bargain" proves too great for many consumers to ignore.

Fast food is a very profitable business for the companies involved, but it's also a dynamic and rapidly evolving business that requires constant innovation and adaptation to consumers' changing palates and nutritional wants and needs. Those fast food restaurants which aren't up to the task simply wallow in mediocrity. Those who do step up to the task can relish in a loyal customer base and a steadily growing business.

Loyalty, though, isn't the easiest thing to measure in the quick-serve sector. Luckily, research firm Brand Keys has done the dirty work for us and in its annual compilation using its proprietary Customer Loyalty Engagement Index determined which quick serve restaurant chain is the best at engaging with customers and keeping them coming back through the door. Today, I'm going to reveal the surprising company that took the top honor, but first, let's have a closer look at why customer engagement and loyalty even matter in the first place for the fast food industry.

Why customer loyalty is important
Customer loyalty is increasingly important in the fast food sector because it's getting tougher and tougher to differentiate between a growing number of fast food options, even beyond just the major chains. The price point for fast food restaurants is often the same, so being able to reach consumers via advertising and having distinguishable branding, as well as a memorable menu that speaks to a variety of consumers, is paramount.

"Why?" You ask? If fast food chains are unable to build up their brand image then their advertising dollars are completely wasted. Most chains rely on promotional offers or collaborations with production companies or celebrities in ads to initially draw consumers into their restaurants. However, fast food chains need their menu selection, interior appeal, and a handful of other factors to do their job of creating an enjoyable experience that will bring these consumers back into the store over and over, otherwise its efforts are wasted. Without loyal customers fast food chain growth would slow to a crawl and brand innovation would likely suffer.

Now that we have a better understanding of why customer loyalty matters, let's check out a few names that didn't make the cut.

Fast food, faster exit
Of the 10 quick-serve restaurants on Brand Keys' list, toasted sub shop Quiznos ranked dead last. But, should we really be surprised? In March Quiznos filed for bankruptcy protection and is currently in the process of restructuring its operations to reduce its long-term debt by $400 million. Unfortunately, with nearly the entire company franchise-owned it's going to take more than just menu innovation and newer technology in its stores to fix its deep-rooted problems.

Despite not finishing last perhaps the bigger disappointment is Yum! Brands (NYSE:YUM) with both Taco Bell and KFC harboring the bottom-half of the list. You'd think that Taco Bell's innovation, such as its Doritos-based tacos and introduction of breakfast would be spurring customer traffic, but ongoing questions surrounding the quality of its beef have plagued much of its traction. Similarly, KFC's slightly higher price points tend to place it below other names on this list.

Close, but no combo!
The top half of the list is filled with a number of familiar names, but none were quite good enough to take the top honor in Brand Keys' eyes.

Ohio-based Wendy's (NASDAQ:WEN) slid into the No. 4 spot likely because it lacks the brand power of the handful of chains ahead of it. Since founder Dave Thomas, the spokesperson and face of Wendy's, passed away in 2002 the company has struggled to find its identity. Although uniquely shaped burgers, a revamped menu, and ridding itself of the underperforming Arby's has helped, Wendy's clearly has a long way to go before it can consistently count on customers walking through its doors.

Burger King Worldwide (NYSE:BKW.DL) claimed the No. 3 spot ahead of Wendy's largely due to its emulation of McDonald's (NYSE:MCD) in recent years. Following in McDonald's footsteps hasn't been a bad idea in the past with peers emulating its interior redesign and value menu to drive traffic through its doors and drive-thru's. However, Burger King's menu additions, including salads and the Big King, look like a spitting image of McDonald's menu. Until Burger King can build its own identity independent of McDonald's it's unlikely to ascend to the top spot, or ever get ahead of the Golden Arches.

Not even McDonald's can claim to have the most loyal customers despite having one of the most recognizable logos in the world. Having a recognizable logo affords McDonald's a number of advantages over its peers, including more effective advertising since it doesn't have to worry about building up its image all too much. McDonald's has been an innovator for years when it comes to bringing new food options to consumers, including salads and snack wraps. It also redesigned the interior of its restaurants to make them more family friendly.

However, McDonald's has also come under fire for its employee practices on a handful of occasions, and its recent lack of innovation, or perhaps the improved innovation of its peers, has put it behind the eight-ball and stopped any chance of climbing from its current No. 2 spot.

This fast food chain is tops in customer loyalty
With McDonald's taking second place that leaves only one quick-serve chain to occupy the top spot in Brand Keys' study. Before I do the great reveal would you care to venture a guess?

If you're a fan of eating fresh then you've correctly figured out that privately held Subway took the top honor for keeping its customers loyal.

Not only has Subway dominated the quick-serve industry in terms of bringing customers back through the door, but it's mopped the floor with the Golden Arches, growing its store count (of which many are franchised) by an annualized rate of nearly 7% per year between 2003 and 2012 while McDonald's store count managed an approximate annualized growth rate of just 1% over this timespan.

There are a number of reasons why Subway is the kingpin of fast-food loyalty.

To begin with, there are few fast-food businesses that will allow you to customize your order as easily as Subway. While you can order a burger without pickles or onions at a number of fast food restaurants, Subway allows true customization with all foods and condiments displayed right in front of the customer. This means no fear of pre-made food and the perception that the food you're receiving has been made freshly, and just for you. 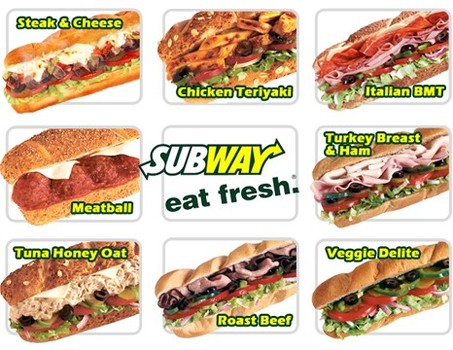 Another key point is that Subway's menu really hits the full spectrum of food quality. The rapidly changing landscape of fast food has evolved to include salads and other healthier options because the public demands it – but you can just as easily pile on the condiments to turn your healthy sandwich into your gym trainers' worst nightmare. The point being that Subway has something for everyone whereas the national chains mentioned above don't have nearly as wide of a selection.

Brand ambassadors have been another big difference between Subway and its peers. Whereas McDonald's has typically aligned itself with movie companies, Subway has an fluid list of some of the most popular athletes in sports today. These brand ambassadors allow consumers to easily forge an emotional attachment to the company.

Finally, don't discount the importance of loyalty cards. The Subway card is a great way to reward return customers and keep them loyal to the brand.

Subway will certainly need to stay on top of its game if it's to stay ahead of McDonald's, but based on where the two businesses are now all the momentum is in Subway's corner.