Everyone wants to find a great stock that trades at a bargain price. Some investors spend hours every day poring through the financial data and valuation metrics of hundreds of companies to find the one rare diamond in the rough that can anchor a portfolio for years. But it might be far easier than you think -- especially if you start with the 30 stocks that make up the Dow Jones Industrial Average (DJINDICES:^DJI).

These companies generally exemplify the qualities we look for in great long-term investments: they're established market leaders with sustainable dividends and have put together decades of strong growth in all sorts of economic environments. It's also worth pointing out that nearly all of them trade at big discounts to their long-term valuations.

Let's explain that for a moment.

The most talked-about valuation metric is the price-to-earnings ratio, which is simply the ratio of a stock's current price to its trailing 12-month earnings per share. For example, if a company that earned $10 per share in profit over its past four quarters has a share price of $100, its price-to-earnings ratio, or P/E ratio, is 10. However, there's another P/E ratio that is often used to discuss market-wide valuations, but which we rarely see used to discuss large, stable, well-established companies like those that make up the Dow: the Shiller P/E, or the 10-year P/E ratio.

This measure, developed by Nobel Prize-winning Yale economist Robert Shiller, measures how pricey a stock (or a market) is relative to its past 10 years of real earnings. We often see it used (typically as the cyclically adjusted P/E, or CAPE, which is a different term for the same metric) to value the market as a whole. Today the market's CAPE is hovering near 25, which is its highest level since the dot-com days, but its actual P/E has been consistently lower, since the CAPE will continue to include the abnormally high P/Es of the Great Recession for several more years: 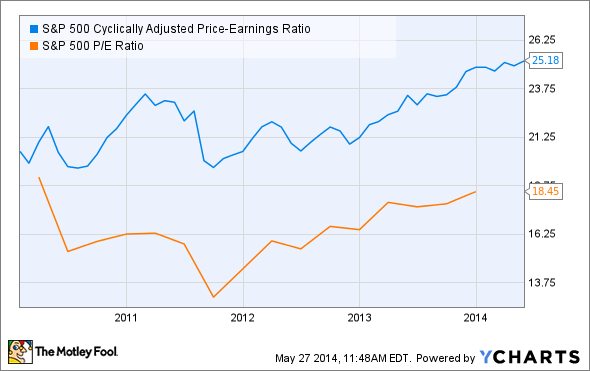 Most overvalued Dow stock: Merck
Merck (NYSE:MRK) hasn't been cheap for some time, as earnings have dropped quite a bit over the last few years due to the loss of a few blockbuster patents. However, the Dow's first drugmaker has been trading above its 10-year P/E since an earnings crash in 2011, and today its trailing P/E ratio is not only the highest of all 30 Dow components, it's also the most elevated over its 10-year P/E, sporting a 48% premium to this long-run metric: 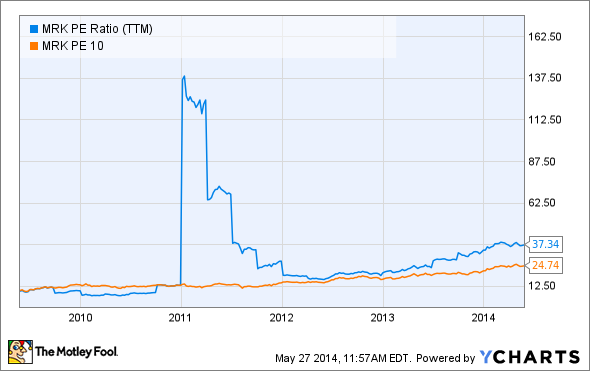 Third-cheapest Dow stock: Disney
The House of Mouse is one of the Dow's pricier stocks today, but that doesn't mean it's overpriced -- the trailing P/E of Disney (NYSE:DIS) shares offers a 42% discount to its 10-year P/E ratio. Contrast that to the market's 27% discount against its CAPE, and you'll see why so many investors remain bullish on the world's most valuable entertainment company: 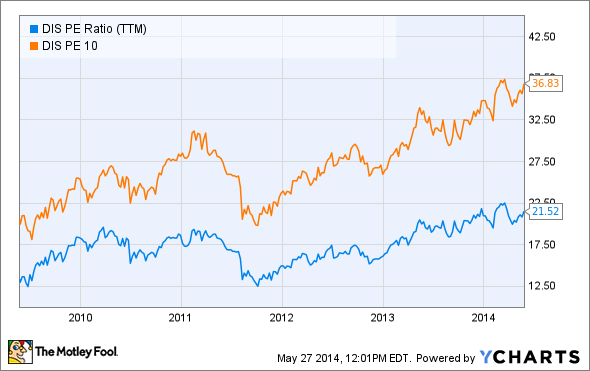 Second-cheapest Dow stock: Travelers
Insurance stalwart Travelers (NYSE:TRV) has traveled (pardon the pun) a strange road over the past two decades, from an independent company to an arm of Citigroup (NYSE: C) and back to independent status following a 2002 spinoff. The company was hurt less than many financial-sector stocks by the Great Recession, but it has still remained largely at rock-bottom valuations since that crash ended. Today its trailing P/E offers a 46% discount to its 10-year P/E, which is one of the largest discrepancies seen since late 2008: 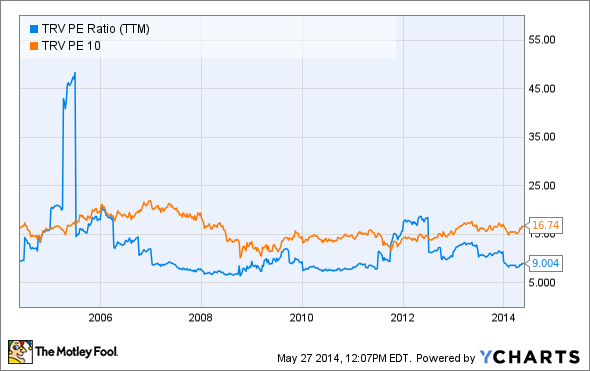 Dow stock with the biggest discount: Verizon
Telecom titan Verizon (NYSE:VZ) leads all 30 Dow stocks with an impressive 55% trailing P/E discount to its 10-year P/E. That's not a fluke of accounting, either -- Verizon's normalized P/E is actually a shade lower than its generally accepted accounting principles P/E, which has bounced around quite a bit in the past few years: 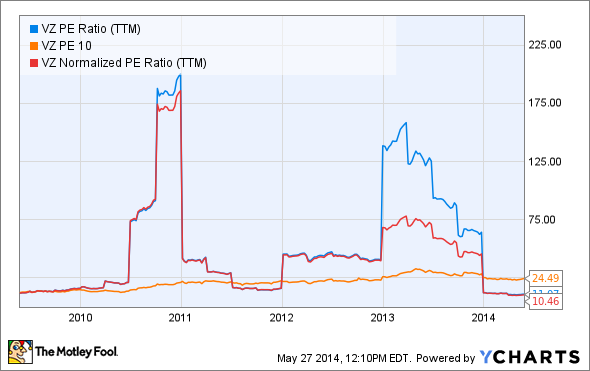 This is the first time since the late dot-com era that Verizon's trailing P/E has been so much lower than its CAPE. That fact should be worth your consideration, since Verizon's weakest returns occurred just after that bubble popped. This metric, like all others, is only one way to approach investing, and it should never be used exclusively to decide which stock to add to your portfolio. However, it's still a useful starting point for any investor who might want to find a stock that's not quite as costly as it looks.

Scroll down for a table of all 30 Dow stocks, ranked by the size of their trailing P/E's discount over their 10-year P/E. 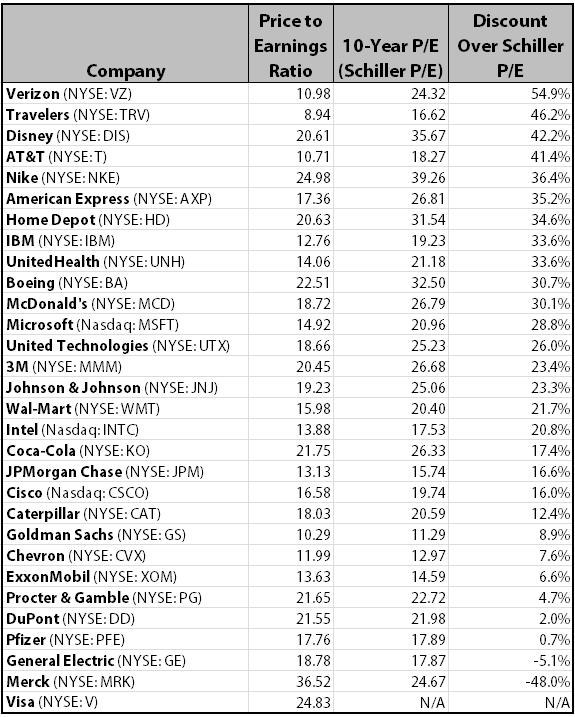 Are These 3 Dow Stocks Even Cheaper Than They Seem? @themotleyfool #stocks $TRV $MRK $VZ $DIS $^DJI Next Article
Current