Nucor (NYSE:NUE) CEO John Ferriola describes the problem bluntly: "Global steel production overcapacity is the greatest threat to Nucor and to our industry." That's why companies like Nucor and Steel Dynamics (NASDAQ:STLD) have been talking to Washington about taking action. But D.C. can only do so much when countries like China continue to produce record amounts of the metal.

Dumping is the problem
According to Australia's Bureau of Resources and Energy Economics (BREE), China produced nearly 7% more steel in the first quarter than it did in the year ago period. That set yet another production record, despite the fact that Chinese steel mills are getting shuttered. According to BREE, "While some steel mills have closed recently amid tighter credit conditions, there remains surplus production capacity in China."

Essentially, the oldest, least-efficient mills are the ones being forced out of the market. That leaves the most efficient mills still running and the overcapacity problem unsolved. Again, Nucor's Ferriola sums it up nicely, "Illegal government subsidies from China and other countries have allowed large amounts of cost-inefficient capacity to stay in production and dump steel into the global marketplace."

That touches on two problems. The first is dumping, which is when companies sell steel into a market below the price of production. The second is how to fight this issue, since banning Chinese steel from U.S. markets would just push that steel into different regions. Those regions would then sell steel at any price into the U.S. market. It's a catch 22.

As Steel Dynamics CEO Mark Millett notes, however, overcapacity has, "Been there for years." The biggest impact has been on steel mills with heavy legacy costs (unions and pensions liabilities) and older technology (blast furnaces). Younger players using electric arc technology like Nucor and Steel Dynamics have held up much better.

The young guns
Nucor is hardly a newcomer to the steel markets, entering the industry in 1969, but it has done a great job of keeping itself young and fresh. In fact, while companies that date back to the turn of the last century have struggled, Nucor has managed to remain profitable in nine of the last 10 years. It increased its dividend each year as well. That's an impressive record when you compare it to AK Steel (NYSE:AKS), which has bled red ink for the last five years.

The first quarter shows there's no change in that dynamic. AK Steel lost over $0.60 a share while Nucor made $0.35 a share. The two big differences between Nucor's steel production methods and AK Steel are the fuels they use and the metal itself. AK Steel uses coal and iron ore. Nucor uses electricity, natural gas, and scrap metal. Add in the legacy costs that AK Steel has to contend with and Nucor's low-cost business model shines.

Founded in 1993, Steel Dynamics uses the same technology as Nucor, making both large recyclers for those with an environmental bent. It also helps explain why Steel Dynamics also posted profits in nine of the last 10 years. First quarter earnings at Steel Dynamics came in at $0.17 a share. 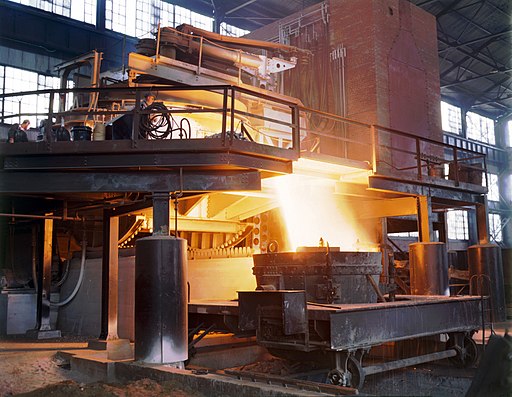 That said, the company trimmed its dividend during the deep 2007 to 2009 recession. It's back on an upward path now, but Steel Dynamics' willingness to cut the distribution gives the income edge to Nucor. Of course, both have an edge over competitors like AK Steel, which continue to post losses.

The good fight
If you are looking at the steel industry, the overcapacity issue will remain a driving force. One look at Chinese production is enough to understand why. That means that you should probably stick to the most competitive players while avoiding those like AK Steel that haven't been able to compete.

Nucor and Steel Dynamics have proven they have resilient business models that can handle low-cost competition. That doesn't mean this pair will back down from the overcapacity fight, just that they are better positioned to make you money while weathering this continuing storm.