Barron's recently had an interesting piece about coal companies being on a long-term collision course with bankruptcy. The article pointed to research by an analyst that suggested while there is no near-term risk of bankruptcy, Arch Coal (NYSE: ACI), Peabody Energy (OTC:BTU), and Alpha Natural Resources (NYSE: ANR) were all on a long-term path that's heading in that direction.

The debt market is already worried

One of the issues that the article pointed out is the fact that the debt market is already worried about bankruptcy at Arch Coal and Alpha Natural Resources. The unsecured debt of both companies is currently trading at distressed levels of $0.70 to $0.80 on the dollar, with yields in the midteens.

On a more positive note both Alpha Natural Resources and Arch Coal currently have plenty of cash. Both boast a billion dollars in cash equivalents, which mutes any near-term risk. But that's only enough cash to last these companies about three years at the current burn rate. It's at that point that both could be facing a liquidity crisis that could lead to a possible bankruptcy.

Meanwhile, Peabody Energy is in a little better shape, though its debt load is still high. That still might have an impact on shareholders as one solution that could be on the table is that Peabody could sell shares to pare down its debt load. Unlike Arch Coal or Alpha Natural Resources, Peabody Energy could actually raise equity capital from the market.

Weathering the storm that just won't end
The biggest issue for Peabody Energy, Arch Coal, and Alpha Natural Resources is that the current storm in the seaborne coal market just won't pass. Coal prices have remained at depressed levels for longer than anyone expected and at this point no one knows when, or even if, prices will rebound. That being said, if coal prices do rebound then all of this bankruptcy discussion is likely a moot point.

There is reason to be hopeful that a rebound will happen. As the following slide from a Peabody Energy investor presentation notes, the seaborne thermal coal market is projected to grow through the end of the decade. 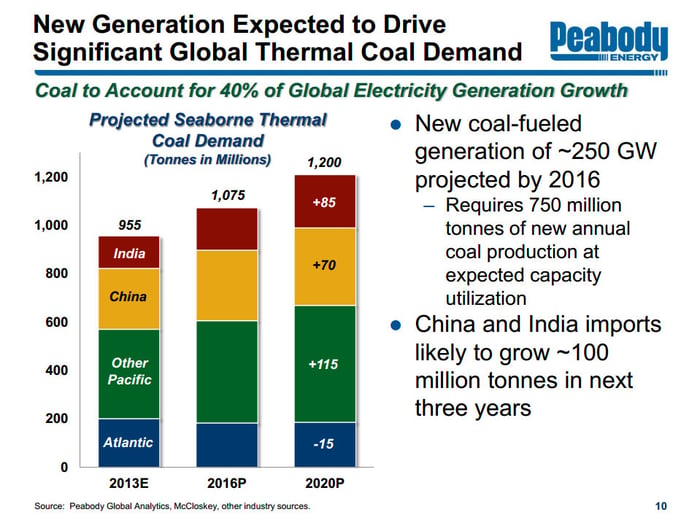 As that slide points out there is 250 GW of new coal-fired power generation coming online over the next few years. Those power plants will require a lot of coal, which will increasingly be supplied by the export market.

Investor takeaway
Coal producers are in a tough stretch right now. If the market for coal doesn't improve both Arch Coal and Alpha Natural Resources could be on a collision course to bankruptcy. That being said, neither is without hope as there are positive fundamentals in the coal market that could yield increased demand for seaborne coal. The only question is if that demand will push prices higher before these companies run out of cash.

Is Coal on a Collision Course to Bankruptcy? @themotleyfool #stocks $BTU Next Article
Current