Think college isn't worth it? It's time to think again.

The rising cost
It's no secret the cost of college has been rising. Since 1992, the average public college has raised tuition by 150%, from $3,500 to $9,000, and while the growth is less dramatic on a percentage basis (up 80%), private colleges have seen tuition skyrocket as well:

The rising cost is part of the reason outstanding student debt has risen by a staggering amount over the last decade, from $240 billion in 2003 to $1.1 trillion in 2014: 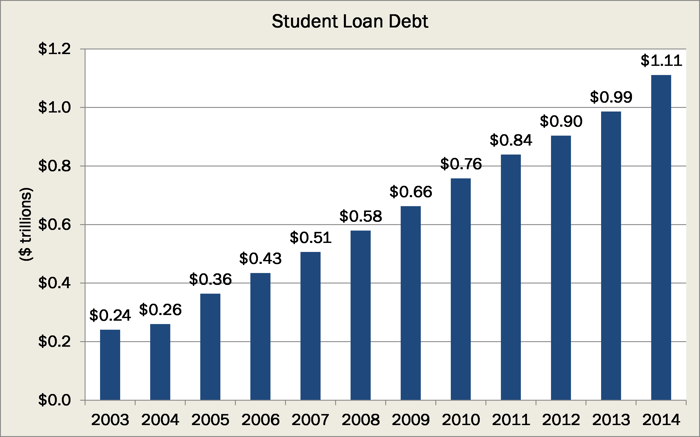 And with debt rising and costs going up, many are now questioning whether or not a degree is even worth it. Even in 2012, The Wall Street Journal reported:

College officials say the long-held faith among many Americans that college is worth whatever it costs is starting to waver under the weight of lackluster job prospects, stagnant wages and a pileup of student debt.

It must be noted as a result of increased enrollment, the debt per student hasn't risen as dramatically as the total amount, rising from $19,300 for the class of 2004  to $29,400  in the most recent class. Understandably though, the thought of carrying 50% more debt is tough to stomach.

The rising benefit
But it turns out, while costs are rising, a college degree is more valuable today than it ever has been.

The latest data from the Economic Policy Institute revealed the average pay for a college graduate stands at $32.60, nearly double the $16.50 for those without degrees. And that gap is only widening, as someone with a degree could expect to earn 65% more in the early 1980s, versus nearly 100% today.

But it doesn't stop there.

MIT economics professor Dr. David Autor revealed that while there still is a wide gap between what men and women can expect to earn based on their degree -- although some of this is the result of their major -- even when rising tuition is included, the true benefit of a college degree has only grown in recent years:

Source: American Association for the Advancement of Science.

Said a little differently, it turns out a college degree equates not to an expense, but a payout of nearly half a million dollars over a lifetime. 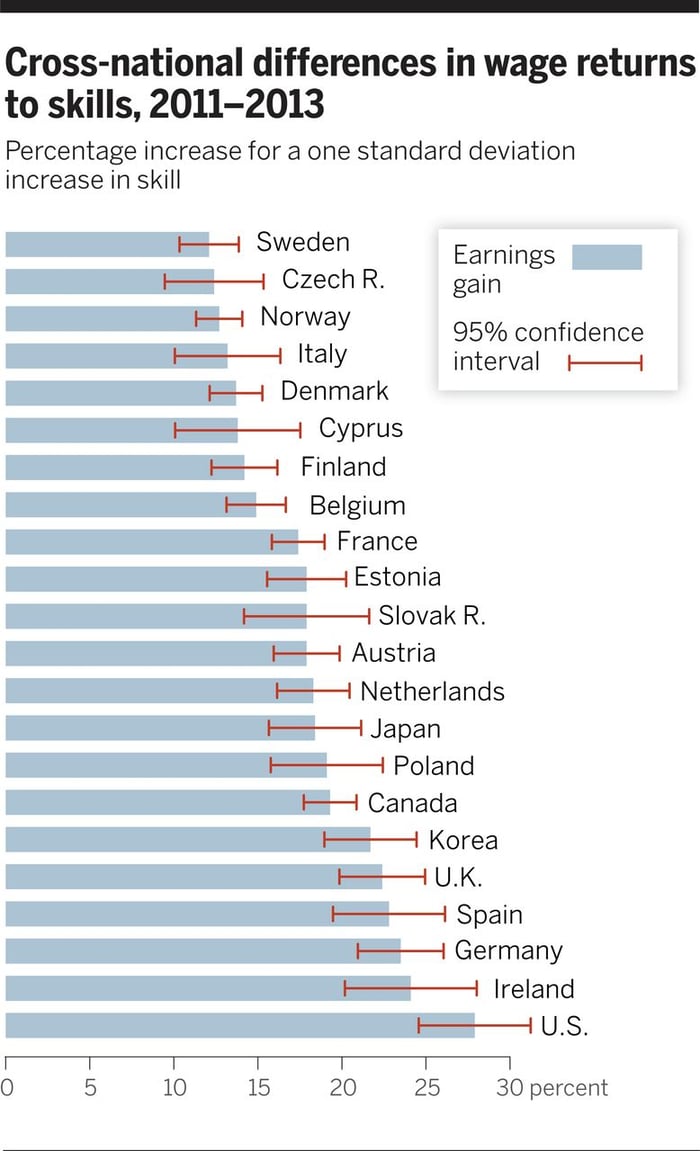 Source: American Association for the Advancement of Science.

As shown in the chart to the right, Autor also found "the United States has a higher skill premium than so many other advanced nations," and a college degree is worth more in the U.S. than in 22 of the most developed countries in the world.

But it isn't just Autor who has shown the benefits of a college degree are growing.

A recent study by the Pew Research Center titled "The Rising Cost of Not Going to College" found someone with a high school degree in the 1960s could expect to earn 80% of what a someone with college degree made ($31,300 verus $38,800). But for those in the Millenials generation, that gap has widened to 60%. As a high school graduate is only expected to make $28,000, whereas a college graduate on average earns $45,500.

And not only is the expected pay rising, but colleges are actually doing a better job today at providing tuition assistance and scholarships to students, so the rising costs on paper don't actually mirror the costs coming out of the pockets of students (and their parents).

The key takeaway
There is no denying certain majors, and even certain schools -- especially for-profit ones -- often provide little true value or benefit to their students. But it would be a major mistake to suggest or believe college isn't worth it.

Because as it turns out, with each passing day, a college degree is becoming more and more valuable.