If we are delighting customers, eliminating unnecessary costs and improving our products and services, we gain strength. But if we treat customers with indifference or tolerate bloat, our businesses will wither. On daily basis, the effects of our actions are imperceptible; cumulatively, though, their consequences are enormous.                                 – Warren Buffett

We don't often think of the customers of the various companies Berkshire Hathaway (NYSE:BRK.A)(NYSE:BRK.B) owns. But Warren Buffett knows that their satisfaction is more important than just about everything else.

In the 2005 letter to Berkshire Hathaway shareholders, Buffett penned the above quote, further explaining how he thinks about and invests in great businesses.

Beyond the financial statements
Often in investing we can be drawn into thinking about only what the balance sheet or income statement tell us. Yet Buffett continually reminds us about the overriding importance of having a "moat" that protects a business from competition.

One of the ways to do that is through low costs. Another is through a powerful brand. Yet in each of those approaches, Buffett understands that the satisfaction of customers who pay for goods and services is critical.

The powerful thought
Buffett built on the above quote by adding:

When our long-term competitive position improves as a result of these almost unnoticeable actions, we describe the phenomenon as "widening the moat." And doing that is essential if we are to have the kind of business we want a decade or two from now. We always, of course, hope to earn more money in the short term. But when short term and long term conflict, widening the moat must take precedence. 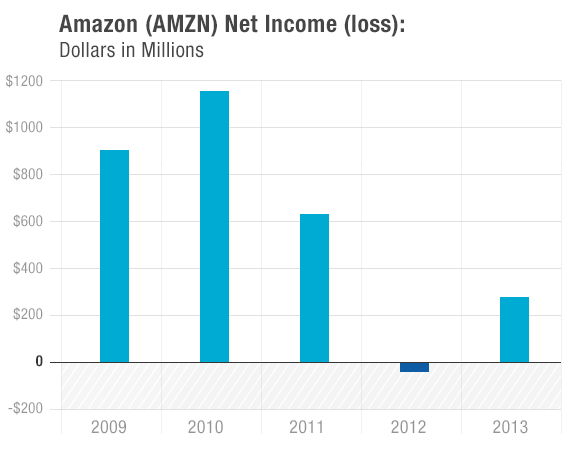 Yet over those five years, Amazon watched its stock skyrocket by almost 650%, from $54 a share to nearly $400. Why? It obviously wasn't the bottom line.

Instead, it had everything to do with revenue growth. By the end of 2013, revenue was triple what it was in 2009: 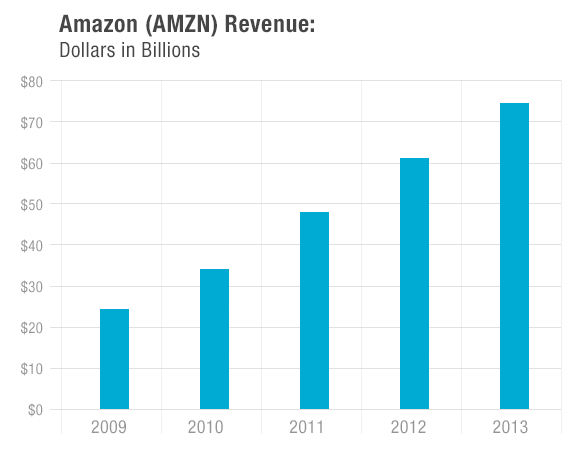 So how did it grow its top line so remarkably? Its low prices played a role. But there is also the fact that Amazon is one of the best companies at satisfying its customers.

Amazon CEO Jeff Bezos once said: "We're not competitor obsessed; we're customer obsessed. We start with what the customer needs and we work backwards."

In 2013, Amazon topped the American Customer Satisfaction Index for Internet retail with a score of 88, an improvement over its own leading mark of 85 in 2012. Meanwhile, the rating for the Internet retail industry as a whole fell by 5% to 78 last year.

The 2014 Temkin Customer Service rating for Amazon was even more impressive -- its score of 79% placed Amazon second among the 232 companies in the United States. In addition, Amazon was head and shoulders above the 59% posted by the broader retail industry, and its showing was a remarkable improvement over the 67% it posted in 2013.

It should come as no surprise that Buffett had this to say about Amazon's chief last fall: "It's a tremendous accomplishment what Jeff Bezos has done -- I tip my hat to him. He's a great businessman and a good guy, too."

All too often investors think short-term quarterly improvements in income are the only thing that matters. However, Buffett emphasizes that "when short-term and long-term conflict, widening the moat must take precedence." Bezos and so many others who have been successful have clung to this reality, and they've widened their moats by offering great service to customers.

Warren Buffett wants us to see that while satisfying customers and widening a moat may not impress anyone on Wall Street in the short term, over the long run, it makes all the difference in the world.