"We ordinarily make no attempt to buy equities for anticipated favorable stock price behavior in the short term. In fact, if their business experience continues to satisfy us, we welcome lower market prices of stocks we own as an opportunity to acquire even more of a good thing at a better price." -- Warren Buffett, 1977 Berkshire Hathaway Letter to Shareholders

For most investors, there's nothing more frustrating than seeing red numbers on your brokerage account homepage, showing that your stocks are down. But according to Berkshire Hathaway (NYSE:BRK.A) (NYSE:BRK.B) chairman Warren Buffett, this reaction is totally irrational.

Instead, Warren Buffett loves seeing red numbers when he looks at his stock portfolio. That's because he is a long-term investor. Only short-term investors or traders have to worry about sudden drops in the stock market. Once you approach investing with the mind-set of a long-term business owner, you'll never feel the same way about stock market fluctuations.

Buffett's strategy: buy and hold forever
Warren Buffett's point in the quote reproduced above is that he -- and by extension, Berkshire Hathaway -- is always looking for good deals on great businesses. Buffett will only buy stock in a company if he is very confident about its long-term prospects. As long as he remains convinced that a business is creating value, he will hold on to his shares.

This is why many people describe Buffett's investing style as "buy and hold forever". However, if Buffett is really planning to hold a stock forever -- or even just 20-30 years -- he doesn't need to worry if it suddenly plunges the day after he buys it. He still has decades to recoup his losses.

In fact, since Berkshire Hathaway generates money for investment every year, Buffett loves to see his stocks suddenly plunge for no reason. It creates an opportunity to buy even more shares at a better price than was previously available. Buffett has usually been pretty good about following his own advice -- as his investment in Wells Fargo (NYSE:WFC) shows.

The making of a Buffett superstar stock
Buffett began buying stock in Wells Fargo in 1990 at a time when most investors were fleeing bank stocks due to the fallout of the savings-and-loan crisis. He didn't have very good timing. In fact, Wells Fargo shares dropped almost 50% within a few months after Berkshire Hathaway first invested in the company.

Many investors would have panicked in that situation. However, Buffett followed through on his long-term strategy. He thought the stock was cheap at its highs in mid-1990, making it absurdly cheap by the time it bottomed out in the fall. 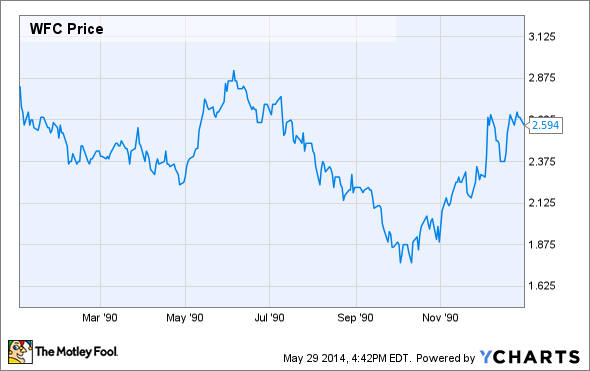 Not surprisingly, Buffett's patience paid off in a big way. Berkshire Hathaway still holds Wells Fargo stock -- in fact, it's Berkshire's biggest investment. Including dividends, Wells Fargo's total shareholder return is more than 3000% since its 1990 peak. 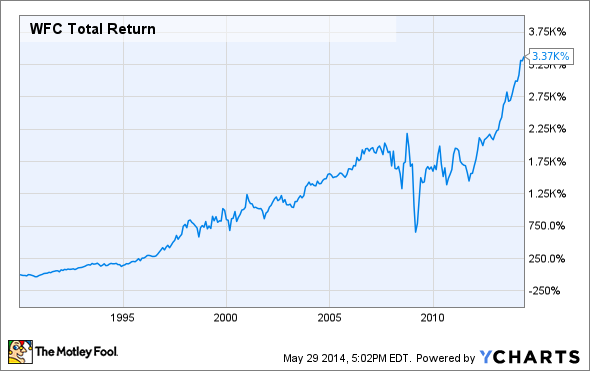 However, for the shares that Buffett bought after the sell-off, he is enjoying an even bigger 5,000% gain right now. No wonder why Buffett is happy when his stocks crash!

Are you buying or selling?
There are some things Warren Buffett can do that are hard to replicate as an ordinary investor. Staying calm in the face of big stock market drops isn't necessarily one of them. The only people who need to worry when the stock market crashes are those who need to sell soon.

Buffett returned to this point two decades later in another shareholder letter, writing: "... [S]mile when you read a headline that says 'Investors lose as market falls.' Edit it in your mind to 'Disinvestors lose as market falls— but investors gain.' Though writers often forget this truism, there is a buyer for every seller and what hurts one necessarily helps the other."

If you're saving for retirement, the best strategy is to save a little every year starting when you're young. If you're putting some money into the market each year, you're an investor, not a "disinvestor". Sometimes you'll be buying the peaks -- but other times you will be buying the dips. The bigger the dip, the better off you'll be in the long run.

Wells Fargo has been one of Buffett's best investments

Even if you are 50 years old today, you still have 15-20 years before you'll need to start draining your retirement accounts in earnest. That gives you plenty of time to ride out short-term stock market gyrations. (Just consider that 15 years after he first invested in Wells Fargo, Buffett was sitting on a 15-bagger: despite the 40% drop he endured during the first few months of his investment.)

Foolish bottom line
Thus, once you commit to investing in high-performing companies and not selling them, stock market drops suddenly become opportunities rather than problems.

Following this piece of Warren Buffett's wisdom is simple enough; it just requires willpower and a change of perspective. Not only is it likely to produce better long-term investment returns; it will also give you peace of mind.