This day has been a long time coming for Broadcom (NASDAQ: BRCM) -- and investors have clearly been looking forward to it. Before the open, shares had already jumped as much as 16% on the news that the company would be exploring strategic alternatives to its struggling cellular baseband business.

Of course, "strategic alternatives" is the common euphemism for selling the segment to the highest bidder. In the event that Broadcom can't find a buyer, it's open to simply winding down its wireless business altogether. After everything is said and done, Broadcom expects to save $700 million in annual operating expenses, which is approximately 19% of its total operating expenses last fiscal year. Broadcom will reinvest $50 million of these savings into its remaining businesses, so the net reduction in annual costs will be around $650 million.

Over the past three fiscal years, wireless segment revenue has marched modestly higher while operating income has waned as Broadcom continued trying to invest in R&D. Eventually, dedicating nearly a fifth of your operating expenses toward your least profitable division stops making sense, particularly in the face of weakening prospects. 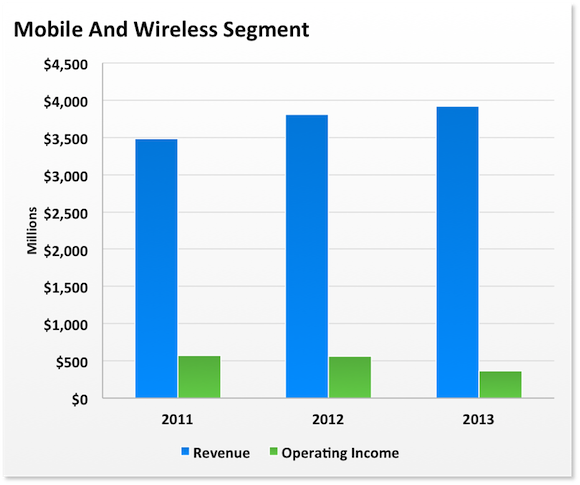 Last quarter, the segment swung to a $32 million operating loss. More importantly, competition is going to get a lot tougher going forward, as opposed to easier. The company is getting squeezed on both ends: MediaTek is coming in from below while Qualcomm owns the high-end LTE market.

On the last earnings call, management acknowledged that it might be tough to hit the $100 million in LTE revenue it was hoping for this year. Broadcom would have needed sell-through on existing design wins to perform well throughout the latter half of the year.

Can we start the bidding at... ?
As far as potential buyers go, Intel and Qualcomm are already technologically ahead of Broadcom, so it doesn't make much sense for either of them to make an offer. There's been plenty of speculation that Apple (NASDAQ:AAPL) is building its own baseband team, which would theoretically cut Qualcomm out of the loop if it ever materialized.

There are several reasons Apple may strategically prefer to do so: deeper vertical integration, the corresponding improvement in battery life, and component cost savings. Furthermore, the industry has been moving toward integrated solutions for years, and Apple remains the largest OEM still buying discrete chips.

Still, that's all easier said than done. If there's one lesson from Broadcom's planned exit, it's that developing competitive baseband solutions is extremely difficult and expensive. While Apple has deep pockets and a love for vertical integration, it may not be worth spending billions of dollars to save $15 to $20 per baseband. The net savings would be even less.

It would also take years just to try to catch up to Qualcomm. Buying Broadcom's wireless talent might shorten that timeline, but the end result would still be uncertain. Remember, it took Apple upwards of five years just to develop its own custom A-chip processors. Developing in-house basebands may end up being more trouble than it's worth, which Qualcomm may find comfort in.

For now, Broadcom will search for a buyer, but either way, bailing on basebands should help profitability. Indeed, the company now expects gross margin to be at or above the high end of guidance. Sometimes, investments simply don't pay off.