When it comes to health-care real estate investment trusts, none are bigger than Ventas (NYSE:VTR). The company operates more than 1,500 health-care properties, including medical office space and assisted living facilities in 47 states.

That size gives Ventas an opportunity to compete aggressively for acquisitions, and today the company announced it is spending $2.6 billion to acquire American Realty Capital Healthcare Trust (NASDAQ: HCT), a medical office and assisted living company that will add nearly 150 properties to Ventas' ever-expanding footprint. 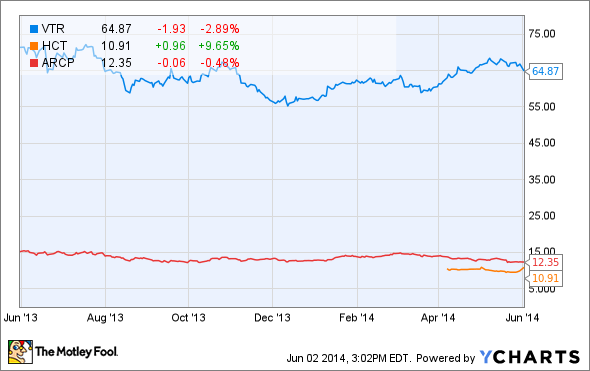 What does Ventas get?
Buying ARC Healthcare will make Ventas one of the largest real estate investment trusts (or REITs) in the country.

Ventas is most heavily concentrated in senior housing, which represents more than 50% of its property portfolio, but Ventas also has a significant presence in skilled nursing and medical office buildings.

Thanks to an aging population and a limited supply of health care properties, Ventas has delivered compounded annual funds from operations, or FFO, growth of 10% since 2000. FFO has really taken off since 2010, climbing from less than $3 per share to an estimated $4.31 to $4.37 this year. That trend should continue given that baby boomers are turning 65 at a rate of roughly 10,000 per day.

To capitalize on that demographic trend, Ventas has spent more than $18 billion on acquisitions since 2011, including its current offer to buy ARC, and boasts a significant presence in key retirement markets including California, Texas, and Florida, which combined account for more than a quarter of its total properties.

Since ARC's portfolio consists of more than 4 million square feet of medical office space across 78 properties, which is 97% rented and accounts for just over half of ARC's net operating income, Ventas position in that market becomes immediately stronger. Importantly, nearly half of ARC's office portfolio consists of low maintenance, high rent space built in the last ten years.

Once the deal is finalized, which is expected by year end, 54% of the newly combined company's business will be from senior housing, 18% will come from skilled nursing, and another 18% will come from medical office buildings, up from 16% previously. Schorsch held the top spot at American Financial Realty Trust, a REIT that bought bank branches and leased them back, from 2002 through 2006. Schorsch was responsible for taking AFR public in 2003, and he and then-Chairman Lewis Ranieri (known by some as the father of mortgage-backed securities) inked a deal for Gramercy Capital Group to acquire AFR for more than $1 billion in 2007.

Following that deal, Schorsch was the founder and chairman of American Realty Capital Trust, a net lease REIT listed on the New York Stock Exchange in 2012. Schorsch that year sold that company for nearly $3 billion to Realty Income.

Fool-worthy final thoughts
Schorsch isn't shy about making deals, and Ventas appears to be walking away with a very attractive portfolio of health care properties that it can use to leverage growing demand from aging baby boomers.

ARC's portfolio has minimal overlap with Ventas' existing locations, which suggests that the deal has little risk of cannibalization, and Ventas estimates that the deal will be immediately accretive to funds from operations, which suggests that Ventas won't have any trouble continuing its streak of dividend increases -- a streak that has allowed dividend payouts to climb 10% per year over the past decade.