Year-to-date, shares of social media giant Twitter (NYSE:TWTR) have fallen 52%. Out of fear that the company's slower-than-anticipated user growth might be signaling an end for shareholder's high expectations, investors have decided to cut their positions in the business. However, two pieces of news that broke during May 27 and 28, followed by the company's subsequent temporary share price appreciation of 11%.

Twitter's got a new gig!
On May 27, Twitter and Omnicom Group (NYSE:OMC) announced a deal whereby the former would pay the latter for preferential access to its MoPub platform. In an effort to increase its appeal to advertisers, Twitter acquired MoPub in 2013 in a transaction valuing the takeover target at $350 million.

As of April 17, Twitter boasted that the platform has access to over 1 billion unique devices across the globe and handles at least 130 billion ad requests monthly. While the total revenue generated by the service has yet to be disclosed, the company's agreement with Omnicom is expected to generate revenue of $230 million over the next two years.

For Twitter, which reported revenue of $664.9 million during its 2013 fiscal year, this move will likely prove a boon for business. Unfortunately, the picture is a little less certain when you consider the impact of the deal on the company's bottom line. In spite of generating attractive revenue last year, the business also booked a net loss of $645.3 million. This should have shareholders concerned.

Upgrades should be a sign of relief for Twitter fans, but are they warranted?
While its deal with Omnicom could potentially create a great deal of value for Twitter, it was the upgrade of the business from "neutral" to "buy" by Nomura that caught the attention of Mr. Market. On May 28, Nomura analyst Anthony DiClemente said that Twitter's significant share price decline this year has been overdone and that the company is "a now-underappreciated digital media asset." 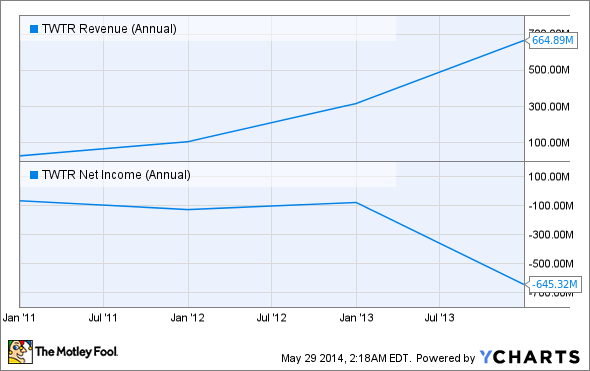 With revenue that has grown a jaw-dropping 2,249% over the past four years and with the business poised to continue its growth spurt from deals like the one with Omnicom, it's certainly possible that Nomura is right. However, the fact that the business has seen its profitability worsen over this timeframe might mean that any price is too high for the social media site.

Between 2010 and 2013, Twitter's management team reported that its net loss had increased nearly tenfold from $67.3 million to $645.3 million. Despite benefiting from higher sales, the company saw its cost structure soar. This was led by its selling, general, and administrative expenses, which jumped 1,797% from $23.2 million to $440 million, and its research and development, which increased 1,927% from $29.3 million to $594 million.

Foolish takeaway
Based on the evidence provided, it's pretty clear that Twitter has a lot of things going for it. It also has a lot of things working against it, however. Because of its large user base, the company's revenue has grown and looks likely to continue growing. Unfortunately, burgeoning costs have left shareholders wondering what all of the company's efforts are worth in the end.

Moving forward, this situation makes the company's prospects dubious. If more lucrative contracts like the one between it and Omnicon can be inked, however, then the company may eventually earn a profit. If this does happen, the upside for the company's shareholders could be tremendous. It's not something that the Foolish investor should take as a foregone conclusion, though.