Shares of world-famous doughnut purveyor Krispy Kreme Doughnuts (NYSE: KKD) were a huge success story in 2013, shooting up 175% over the course of 11 months. However, in December of 2013 and so far in 2014, it seems that Mr. Market is intent on, frankly, "Krispy Kreme'ing" the company's stock, sending it downward almost 30%. 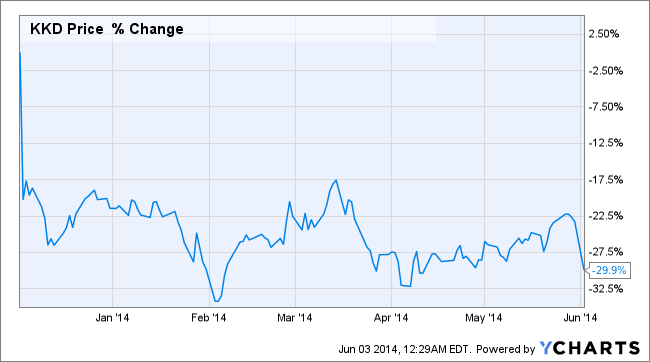 Now that Krispy Kreme has opened up the fiscal first quarter with a poor earnings report, is now the time for investors to "bite into" Krispy Kreme stock, or is the market correctly turning down the heat on a potentially overheated stock? I believe the downward trends for Krispy Kreme may signal caution for prospective investors as the company needs to show that it can generate sufficient cash flow to grow the business. Krispy Kreme was an overvalued stock in 2013, and it remains so today.

A half-baked quarter
The company released a disappointing quarterly report for the first quarter of fiscal 2015, which sent Krispy Kreme stock sinking in after-hours trading. Although the company generated earnings per share, or EPS, in line with analyst expectations and the numbers themselves were not that bad, Krispy Kreme cut its earnings forecast because ferocious winter storms ate into its profits.

The good news is that the winter storms are over and the one-time event is now out of the way. The bad news is that Krispy Kreme is riding on a paper-thin profit margin which impedes its ability to grow. The company's free cash flow last year equaled 2.7% of its cash-adjusted market value. That number is a troubling statistic for any Krispy Kreme investor, as it means the company is barely profitable and will have to make its franchisees pay heavily for growth. For a high-flying growth stock like Krispy Kreme, free cash flow and earnings per share need to be growing, not stagnating.

The confidence of leadership and company insiders is also a key factor for a growth stock like Krispy Kreme. Unfortunately for Krispy Kreme, that too is seemingly turning for the worse. Senior Vice President Michael Bradley Wall sold off 11,000 shares of the company in a transaction dated May 27, 2014. Although 11,000 isn't a huge number to get overly concerned about, this insider selling is potentially a sign of management's weakening confidence in Krispy Kreme's ability to return value to shareholders.

Bright spots
Krispy Kreme does have some key points in its advantage, however. The Krispy Kreme brand is a strong tradition in the doughnut world. Consumers enjoy the quality of Krispy Kreme doughnuts, and seemingly so do several Wall Street analysts. Sidoti and Company, LLC, recently upgraded shares of Krispy Kreme Doughnuts from a "neutral" rating to a "buy" rating. Overall coverage of the stock remains positive, as Krispy Kreme shares currently have a consensus rating of "buy" and a consensus target price of about $23.07 per share.

Also, Krispy Kreme has made some strategic partnerships by launching bottled iced coffee in Wal-Mart stores and has a K-Cup partnership with Keurig Green Mountain. These partnerships may prove to be key areas for revenue going forward.

The competition
Krispy Kreme is not alone in the world of doughnuts and coffee. Perennial Krispy Kreme competitor Dunkin' Donuts (NASDAQ:DNKN) may prove to be troublesome in California, as the traditionally East-Coast-centric Dunkin' is branching out to the West. Dunkin's latest earnings were also somewhat disappointing due to winter storms but were still fairly strong. Earnings per share increased 13.8% and revenue increased 6.2% year-over-year, driven by comparable-store sales rising 1.2% at company-owned Dunkin' Donuts locations in the United States.

Final thoughts
Krispy Kreme has good consumer loyalty and potentially lucrative partnerships with Wal-Mart and Green Mountain Coffee Roasters. However, the prior few months have seemingly been a period where the market has hit the "rewind" button on Krispy Kreme's upward trajectory -- for good reason. The long-term prospects for growth are anemic at best for a company which needs to prove to its investors that it has strong earnings power.

Perhaps the large declines in Krispy Kreme stock are the perfect setup for a comeback run in the remaining half of 2014; the odds are not tilted in favor of that happening though. One bad quarter is not reason to sell, but I would advise investors not to bite into Krispy Kreme stock until the company can demonstrate consistent growth.