Bill Ackman's hedge fund Pershing Square, which owns 9.7% of Allergan, has been supporting Valeant's takeover efforts. Pershing Square recently requested a meeting to replace Allergan's board of directors to facilitate a takeover, but Allergan could delay the meeting to as late as November. Ackman has also met with six major Allergan shareholders, who had a combined stake of 19% in the company, who reportedly may support Valeant's bid.

Valeant CEO Mike Pearson has urged Allegan to at least negotiate with the company. Valeant's latest bid consists of $72 in cash and 0.83 share of Valeant stock for each share of Allergan, which values Allegan at approximately $182 per share -- 7% higher than its closing price on Tuesday. Valeant is also offering possible additional payments related to future sales of Allergan's experimental eye drug. Shares of Allergan have rallied 77% over the past six months on positive earnings reports and takeover speculation.

Sales of Allergan's cosmetic and eye care products have soared over the past few years. In 2013, sales of Botox rose 12% year-over-year to $1.98 billion. Sales of its medical devices, which primarily consist of facial and breast aesthetic products, also climbed 12% to $856 million. Sales of Restasis, Allergan's chronic dry eye treatment, rose 19% to $940 million.

Acquiring Allergan would considerably boost Valeant's portfolio of cosmetic drugs and eye treatments, which it has inorganically grown through the acquisitions of Bausch & Lomb, Medicis Pharmaceutical, and Solta Holdings.

UnitedHealth also declared a $0.375 per share quarterly dividend, representing a 34% increase from its previous dividend of $0.28. The dividend, which represents a forward yield of 1.88%, will be payable on June 25 to shareholders of record as of June 16.

UnitedHealth is the country's largest insurer. Last quarter, the company reported 4.5% year-over-year growth in revenue, but earnings per share fell 7.8%. Although UnitedHealth has outperformed the S&P 500, it has underperformed its three main competitors -- Aetna, Cigna, and WellPoint -- over the past 12 months. 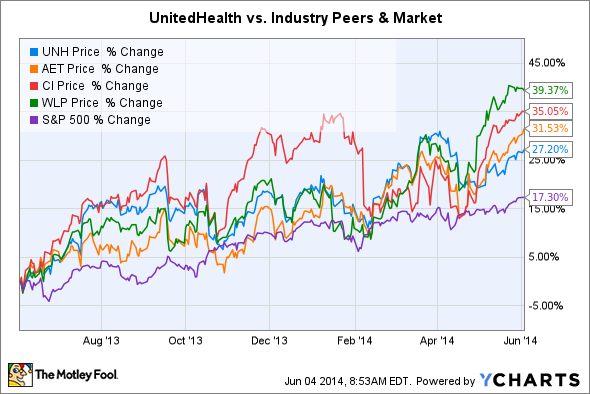 Shares of UnitedHealth are up slightly in pre-market trading this morning.

Cyberonics tops earnings estimates but misses on revenue
Last but not least, Cyberonics, a medical device company focused on implantable medical devices for neuromodulation and vagus nerve stimulation (VNS) therapy, just reported its fourth quarter and full year earnings. Cyberonics' VNS system is approved by the FDA for the treatment of refractory epilepsy and treatment-resistant depression.

Looking ahead into fiscal 2015, Cyberonics expects full-year revenues to come in between $300 million and $307 million, with non-GAAP earnings per share between $2.33 to $2.39 per share. Global units sold are expected to climb 7%.

Shares of Cyberonics have advanced more than 25% over the past 12 months.