Hydrogen fuel cell maker Plug Power (NASDAQ:PLUG) was one of the hottest stocks of 2013, rising from a low of $0.26/share to a high of $11.72 (a 4,400% increase). The media-hype surrounding this company got many investors interested in fuel cell stocks, such as competitor Ballard Power Systems, which was up about 400% at the time Plug Power was peaking.

With several automakers such as Honda and Hyundai investing in fuel cells as an alternative to Tesla Motors (NASDAQ:TSLA) and battery-powered electric vehicles (EVs), and with Plug Power dropping 63% from its recent highs, investors may be wondering whether or not this is a good time to jump on the fuel cell bandwagon, now that the stock seems closer to the ground floor. However, as I'll explain in this article, not only is Plug Power a bad idea as a long-term investment, but the entire idea of "a hydrogen fuel cell economy" is pretty much dead on arrival.

Why Plug Power is a terrible investment
First of all, let me be clear that Plug Power is not in the auto market (and is itself not a direct competitor to Tesla) but caters mainly to warehouse vehicles, such as forklifts. However, I feel that the company is so unfriendly to shareholders and so fundamentally flawed that a brief warning to potential investors is required. Plug Power's run-up from less than $1/share to over $11 occurred in a three-month period after signing contracts with Fedex and Wal-Mart. The company responded with not one, not two, but three secondary offerings in which it diluted existing shareholders (by 271%), and did so at enormous discounts to the share price at the time (more than a 50% discount to be exact). In total it raised $150 million despite a mere $30 million in 2013 sales. 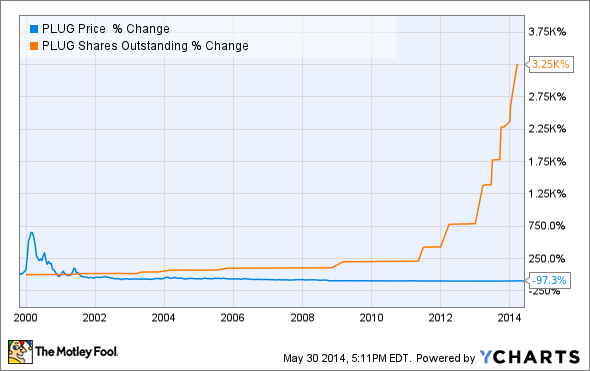 As this graph shows, the company has a history of diluting existing shareholders (a 33.5-fold increase in shares since 2000, a 29% CAGR dilution rate) and destroying shareholder value (share price growth of -23% CAGR). But the biggest problem with Plug Power isn't just in its shareholder-unfriendly behavior, it's with the idea that America will eventually transition to a "hydrogen economy."

Why automotive fuel cells have no future
A lot of big companies, including automakers such as Ford, GM, and Toyota (NYSE:TM), have spent billions researching fuel-cell cars, with Ford, Daimler, and Nissan announcing a partnership to develop a "common fuel cell system" they could bring to market by 2017.

Toyota recently doubled-down on fuel cells with its North American CEO, Jim Lentz, stating that the company was focusing on hybrids in the short term and fuel cells in the long term (as opposed to EVs). The company recently unveiled a 300-mile range fuel cell concept car that it claims might be available for a starting price "in the neighborhood" of $50,000 in 2015, putting it in direct competition with Tesla's Model S.

Despite support from these major corporations there are two very fundamental reasons why hydrogen fuel cells will lose to battery electric as the technology of tomorrow.

The cost of building a hydrogen infrastructure to replace petroleum and natural gas would be an estimated $200 trillion. Compare this to the cost of a smart electric grid, $338 billion to $476 billion, which would impart $1.4 trillion to $2 trillion in economic benefits.

Updating our aging electrical grid is something that America will need to do anyway to keep our lights on and economy running. In the process we can help expand the existing infrastructure to accommodate electric cars which cost $0.75/gallon equivalent to fuel, as opposed to $4.5/gallon equivalent of hydrogen, which the department of energy believes may drop as low as $3.75/gallon equivalent by 2020.

This brings me to the second fundamental  problem with fuel cells -- the fuel. Hydrogen is not an energy source but a store of energy, much like a battery. Today 96% of hydrogen is made from natural gas, in a process that is 72% efficient. Hydrogen can be made from water in a process called electrolysis -- which is 70% efficient. However, because it is the smallest, lightest, and least dense element hydrogen must be compressed to be stored. When one considers the energy losses of creating hydrogen (say from wind or solar powered electrolysis) then compressed into a vehicle's fuel tank, it will never be as efficient, nor as cheap, as taking that electricity and putting it straight into a battery.

The bottom line is that EVs, such as Tesla's Model S, will always have the upper hand over fuel cells due to higher efficiency and lower fueling costs. Throw in the lack of hydrogen infrastructure and more expensive price tag to build said infrastructure and it becomes clear that hydrogen fuel cells have a very limited future, if any.

Foolish takeaway
Plug Power's recent stock price rise and fall are examples of pure speculation, and long-term investors should steer clear of the company, if for no other reason than hydrogen fuel cells are simply inferior to battery electric technology on an efficiency and fuel cost basis. Tesla motors, though also highly speculative, is a far better investment, representing superior technology, exceptional management, and incredible optionality opportunities.