Apple (NASDAQ:AAPL) has finally unveiled its long-awaited Health app for iOS 8 at the Worldwide Developer Conference 2014 in San Francisco. The app, simply called Health, will pull data from third-party apps and devices into a single unified hub for iOS. Developers will use the development platform, known as HealthKit, to create Health-compatible products.

Simply put, health data from a fitness band, a smart glucose monitor, a blood pressure monitor, or a calorie counting app can now all be accessed via a central app instead of separate ones. 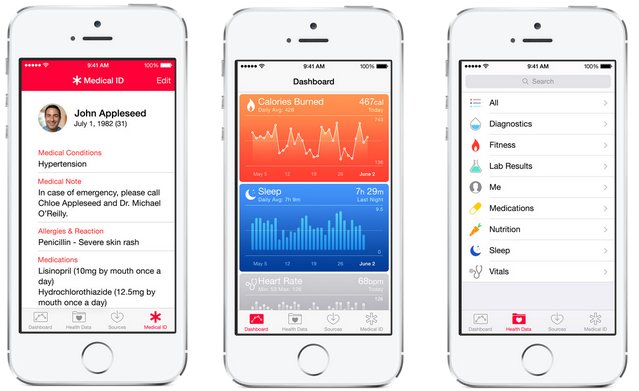 During the keynote presentation, Apple showed devices from Nike (NYSE:NKE), Fitbit, Wahoo Fitness, iHealth, and Withings -- which will all be compatible with HealthKit. Apple also integrated Mayo Clinic's app with Health, allowing Health to alert Mayo Clinic's app or medical professionals if abnormal readings in blood pressure, heart rate, or other vital signs are detected.

Samsung's Simband prototype contains individual sensors which serve certain purposes, such as monitoring heart rate or hydration levels. These sensors can be swapped out like the components of a computer to create customized wearable devices.

Samsung doesn't intend to sell Simband to consumers. Instead, it plans to profit from licensing the reference design to other companies. Samsung expects these companies to swap out and customize the sensors to produce and market new wearable devices. 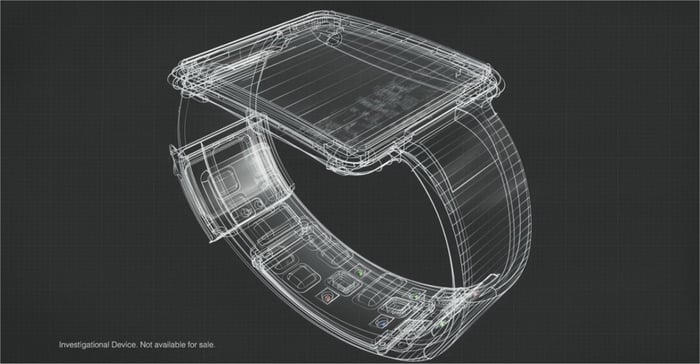 Despite approaching the wearables market from opposite sides -- Apple from software and Samsung from hardware -- their goals are similar. Both companies hope to claim a large share of the fitness tracking market by passing on the risks to third-party companies. In other words, why release a single wearable device into the market when you can control the entire ecosystem?

The future of wearable devices
Samsung already found out that launching a first-party wearable device can be tough -- its Galaxy Gear smartwatches have been criticized for their high price tags, dependence on Galaxy smartphones, and weak selection of apps. Therefore, it makes sense for Apple to turn iOS into the central hub for the tough wearables market before releasing a smartwatch of its own.

Apple, which controls 41% of the U.S. smartphone market, is leveraging its clout in mobile devices to persuade wearable manufacturers to connect their devices to HealthKit and strengthen its iOS ecosystem.

In the future, wearable makers could slim down their companion iOS apps considerably, opting to integrate a minimal app into Health instead of spending time and money to develop a full-featured app. That could fuel the development of more iOS-exclusive fitness trackers, but Google could also launch a rival unified health platform of its own for Android.

Will there be an iWatch?
The key question now is whether or not Apple will release a wearable device of its own to complement HealthKit.

Despite its rocky start, Samsung is expected to announce a third-generation Galaxy Gear smartwatch later this year. However, Nike laid off the majority of its FuelBand team in April presumably to focus exclusively on fitness apps, indicating that the wearables market can still be a tough nut to crack.

At the end of 2013, the NPD Group reported that Nike's FuelBands controlled 10% of the fitness bands market, coming in third behind Fitbit's 68% share and Jawbone's 19% share. FitBit and Jawbone claimed larger shares of the market because they are available for both iOS and Android devices. Nike's FuelBand has always been an iOS-exclusive device.

Therefore, many investors have wondered if the end of FuelBand means that Nike and Apple are working together on the long-rumored iWatch. It certainly makes sense -- Tim Cook sits on Nike's board, the two companies have been partners since 2006, and Apple hired several of Nike's top FuelBand designers last year.

The Foolish takeaway
For now, Apple has cleverly positioned itself as the hub of a rapidly growing market for fitness apps and wearable devices with HealthKit.

The market for fitness apps is expected to grow to $26 billion by 2017 -- representing 61% compound annual growth from 2013, according to research firm Research2Guidance. Meanwhile, Canalys forecasts shipments for wearable smart bands to rise from 8 million in 2014 to 45 million by 2017.

Will Apple's unified software or Samsung's modular hardware help them capitalize on that growth? Investors should keep up with the news about HealthKit, Simband, and other mobile health devices to find out.