The last quarter has been particularly tough on retailers across America, as massive winter storms have walloped earnings for many such businesses across the board. Dollar stores such as Dollar General (NYSE:DG) are no exception to this trend, as Dollar General recently revealed both earnings and sales misses in its last quarterly report.

Does this indicate that investors should consider competitors like Dollar Tree Stores (NASDAQ:DLTR) or Family Dollar (NYSE: FDO), or should investors stay on the sidelines and refrain from investing in dollar stores altogether? I believe the three dollar stores in question all continue to provide a unique hedge against economic downturns and remain good investments in general, even though they recently missed quarterly projections.

Dollar stores provide consistent growth
A key idea to take away when considering dollar stores is that they provide a good place to park money during a recession. Consider the Great Recession of 2007-2009. Both Dollar Tree and Family Dollar actually made substantial gains during this time, as seen in the chart below (the gray shaded area is the recession period). 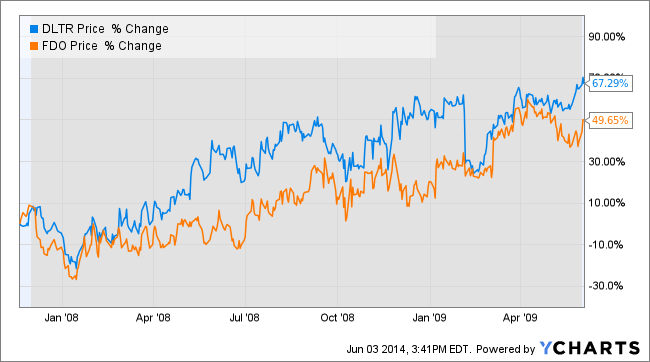 Dollar General did not become a public company until after the Great Recession, but the overall analysis remains the same. During an economic downturn, consumers tend to want to save money more. What better way to save money on essential items than by starting to shop at dollar stores?

We can also see that dollar stores seem to also do well even during more prosperous times, not only on stock price appreciation but also on net income. Net income is an important indicator of a company's effectiveness at generating free cash flow as net income subtracts the cost of goods sold, various expenses, and taxes. 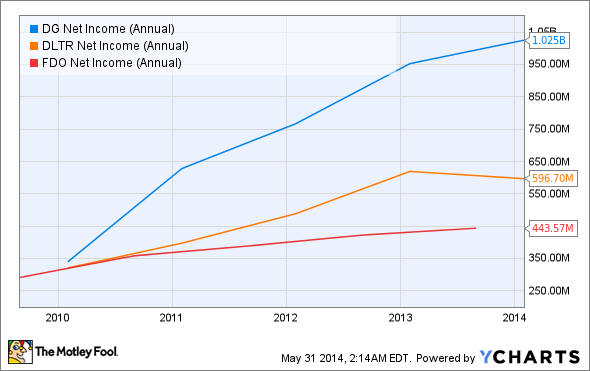 From a long-term perspective, it appears that all three dollar-store stocks are solid investments whatever the business climate may be, delivering outstanding returns to patient stockholders who have a long view.

However, as retailer after retailer report tough sales conditions this quarter and predict continued trouble ahead, Dollar General sees improvement on the horizon. In a statement, the retailer's CEO said he sees positive trends gaining momentum toward the tail-end of the April-ended quarter. Where others have struggled over the year, the company has increased sales by adding brand-name products to its stores and opening up a number of new locations.

Now that the winter storms are over, Dollar General can rebound during the warm summer months. While the results of both Family Dollar and Dollar Tree are nothing to sneeze at, they simply cannot match the unparalleled earnings power of Dollar General, at least for now. Family Dollar does tout an impressive dividend while Dollar Tree and Dollar General do not. However overall, when looking at all three companies, I believe Dollar General is the company best primed for continued growth due to its large market presence, strong revenue growth, and key competitive advantage.