Carbon is the current environmental bad guy and the government is looking to get tougher on one of its largest emitters, the utility industry. That's bad news for coal and natural gas, which are both carbon based fuels. However, nuclear could see renewed interest if the 30% carbon dioxide regulations are imposed, which would make the nuclear plants owned by Exelon (NYSE:EXC) and Entergy (NYSE:ETR) more valuable.

A cleaner industry
The utility industry is one of the largest sources of pollution since it makes heavy use of carbon-based fuels like coal and natural gas. However, technology has allowed the utility industry to clean up its act. For example, according to an industry report, NOX and SO2 emissions in 2012 were roughly 75% and 80% below their levels in 1990, respectively.

Those emissions, however, aren't the headline grabbers of today. Right now, carbon dioxide gets all the attention. On that score, the utility industry hasn't done so well. CO2 emissions are up nearly 15% since 1990, though they declined roughly the same percentage between 2008 and 2012. But that's not enough to silence the critics. (It's worth noting, however, that utilities account for only about 40% of domestic CO2 emissions, with automobiles coming in a close second.)

That's why the U.S. government is looking at stringent guidelines, a 30% reduction from 2005 levels, for the greenhouse gas. That would be bad news for many utilities, since coal and natural gas combined accounted for two thirds of the power generated in this country in 2013. And while shifting from coal to natural gas helps reduce CO2 emissions, it doesn't solve the issue—it just buys time. 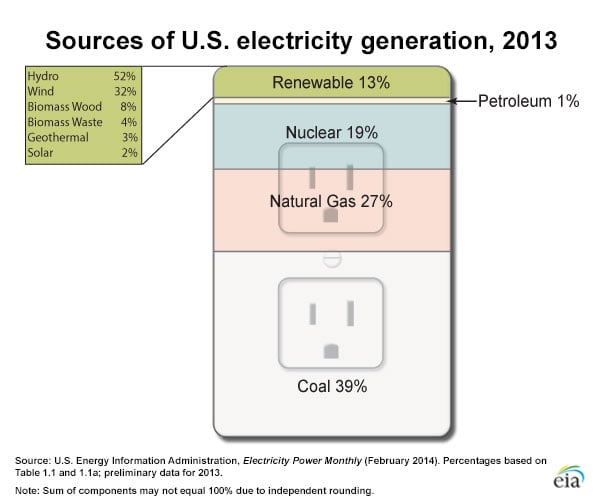 Nuclear power to the rescue
That's where nuclear power comes into play. Nuclear power is expensive to build, but is among the cleanest and most reliable base-load power sources available. It accounted for nearly 20% of the power in this country in 2013. However, low natural gas prices and generally weak power demand since the 2007 to 2009 recession have made it hard for nuclear power to compete.

That, plus an image problem related to large-scale disasters like Fukushima in Japan, have led to nuclear plant closures. That's too bad, since more nuclear power plants would actually help reduce the greenhouse gas problem. But as government regulations make carbon fuels more expensive to burn, nuclear could become an increasingly more competitive option. 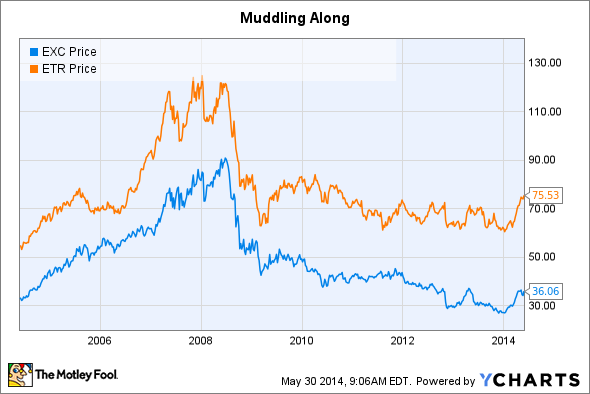 Neither company has been doing particularly well of late. Exelon's earnings were up 40% last year, but that comes after four years of declines from a peak in 2008. And the $2 a share earned in 2013 was well below the 2008 high water mark of over $4. Entergy's earnings peaked in 2011 at around $7.50 a share and have fallen in each of the last two years. The share net tally in 2013 was roughly $4.

Entergy has managed to keep its dividend steady for the last three years, but Exelon finally made the tough call to trim its disbursement by roughly 40% last year. That's always a tough thing for utility investors to accept, since dividends are a key draw for buying a utility.

Watch for the upturn
That said, the new carbon rules could leave this pair of nuclear-heavy utilities with renewed strength. While others would be saddled with heavy costs for upgrading plants or, perhaps, buying carbon permits, half of Exelon's generation and a third of Entergy's is, essentially, carbon free. That will make these power companies more competitive and likely boost demand and earnings.

The new carbon rules aren't in effect yet, but there's no denying that carbon is squarely in the government's cross-hairs. As two of the largest players in the nuclear space, however, Exelon and Entergy will actually benefit from draconian changes. That makes this pair an interesting hedge on future environmental regulation.