If Microsoft (NASDAQ:MSFT) is serious about bringing Office to Android before it reaches Windows, then it's time to start winding down the tablet business. Windows Surface is facing irrelevance.

ZDNet's Mary Jo Foley cites unnamed sources who say Mr. Softy is pushing back its release date for the new touch version of Office for Windows 8 from fall 2014 to spring 2015. An Android version is due in the interim, which can't be good news for Microsoft Stores selling Surface tablets. But is it good news for Microsoft stock? I think so, yes.

Robotic virtues
Windows isn't the draw for tablet users that Android is. According to Gartner, Microsoft ended 2013 with 2.1% of the overall tablet market with roughly 4 million Surface tablets sold. Android commanded 62% of the market over the same period, while the iPad accounted for the remaining 36%.

Growth in tablet shipments is expected to slow from over 50% last year to about 12% in 2014, IDC says. Android will nevertheless continue to dominate with 64.4% of the market, followed by 30.3% for the iPad, and 5.3% for Windows Surface, the researcher says. Microsoft's own tablets comprise a relatively tiny portion of the addressable market for touch-activated Office apps.

Selling by brand versus platform
You can bet that Microsoft CEO Satya Nadella is aware of these statistics and others like them. After all, in taking the job, he promised that Mr. Softy would not be "bound to one app, on one device, in one place." Rather, he'd order his team to build cloud-capable software that could exist on a variety of platforms while performing better than alternatives. Office for iPad is proof the strategy can work. 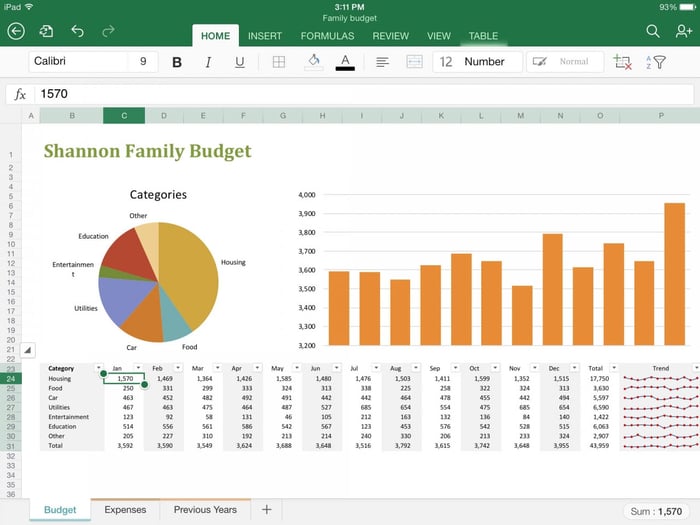 Microsoft's Excel for iPad was the 61st top-grossing iPad app as of this writing. Credits: iTunes App Store, Microsoft.

We're seeing it in the Office 365 numbers. Sure, anyone can download basic versions of the Office apps to an iPad. Full functionality requires a subscription that can run as much as $99.99. All told, Microsoft generates roughly $2.5 billion of Office 365 sales annually as of this writing.

For Microsoft, that's a huge shift. The company once known for "embracing and extending" others' software and tools is no longer selling a platform but a brand. In this case, Office, the world's best-known and most-used productivity software. More than 1 billion people around the world use some version of Office, Microsoft says.

All of which is to say that Office matters more to Microsoft than Surface does. That Nadella is addressing this reality now by getting the latest touch version to Android first is good news for every Microsoft shareholder. Do you agree? Are you using Office 365 on the iPad? Leave your comments in the box below.