It's an understatement to say rare-earth minerals miner Molycorp (NYSE: MCP) has had a rough go of it. Not only has pricing collapsed over the past few years and China's loss of quotas and tariffs before the World Trade Organization indicated they'll likely fall further, the miner has also had to contend with countries throwing their collective weight behind a search for new rare-earth resources exacting new competitive pressure on its operations.

However, the development of lab-made rare-earth metals may present a chance for it to reach its stated goal of profitability that much sooner, though it presents another looming headache for the miner.

Last week, the MIT Technology Review provided an in-depth look at a start-up called Infinium that's promising to revolutionize the rare-earths industry by creating the minerals in the lab cheaply and cleanly, initially producing a half ton of rare-earth metals annually before switching over to a machine later this fall that can produce up to 10 metric tons annually. While that's just about 1% of the 1,100 metric tons of rare-earth oxides Molycorp produced in the first quarter of 2014, it really marks a turning point for the industry as a whole.

The current process calls for dunking the metal oxides in a bath of molten salt and running an electrical current through, a procedure that generates carbon dioxide. Instead, Infinium's process swaps a carbon electrode for a ceramic zirconium one, which doesn't react and give off greenhouse gases, to produce the metal.

Infinium says it has the capabilities to produce other metals such as magnesium, aluminum, silicon, and titanium, but it's going to start with rare-earth metals neodymium and dysprosium because they command some of the highest premiums and are considered by the U.S. Department of Energy among the most critical energy materials, which are used in magnets for applications in vehicles and wind turbines.

Over the next five to 15 years, neodymium and dysprosium are seen as key in the criticality matrix. 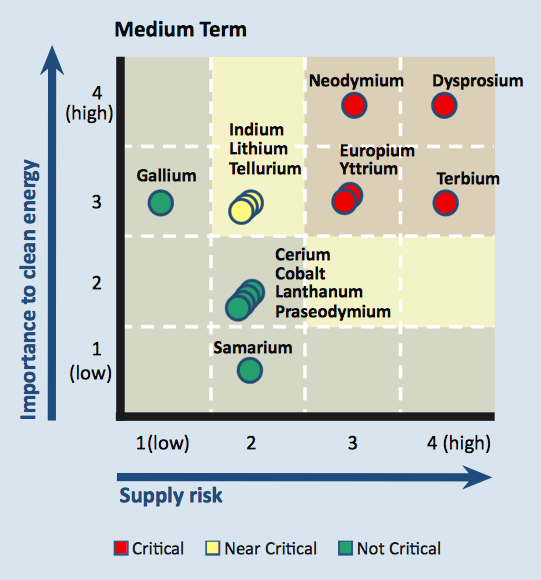 Its magnetic materials and alloys segment produces its Neo Powders that are used in the production of just such high-performance magnets and are found in micro motors, precision motors, sensors, and other applications. Neo Powders represented 41% of the division's revenues in 2013, which itself comprised nearly 46% of consolidated revenues. However, Molycorp actually sources most of the neodymium it uses in the MMA segment from the open market through multiple suppliers, though it has anticipated sourcing increasing levels of it through its own resources division in the future.

Still lanthanum and cerium remain the rare earths in most abundance at Mountain Pass but they happen to have the least value among all the minerals because of their prevalence. According to Moylcorp, lanthanum traded at the end of last year at the same level it did in 2009, before the sector took off for the stratosphere following China's clamp down on their export, while cerium maintains a 50% premium. Even so, in comparison to neodymium, praseodymium, terbium, and dysprosium -- the most common rare-earth elements -- it lags far behind. 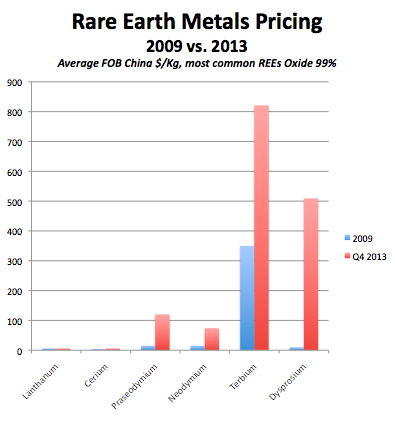 If Molycorp is able to source neodymium from a cheaper source that could further improve the segment's profitability as MMA was the miner's only profitable segment last year.

Infinium, though, says its first customer will be the U.S. government so synthetic sources won't be available initially for Molycorp to take advantage of. However, investors also need to be concerned if the start-up moves into the other rare-earth metals as that could impact its own bread and butter. And by utilizing the lab-made alternative, it would be financing the very source of its future competition.

Synthetic rare-earth metals may help Molycorp overcome certain hurdles near term, but they could be a larger problem down the road.