Magnum Hunter Resources (NYSE: MHR) thinks it has found the world's next great shale play. The company sees great potential in Australia's Cooper Basin, which is why it's making it second acquisition of a small Australian driller focused on developing that basin. In so doing, it's joining major oil companies like ConocoPhillips (NYSE:COP) and Chevron (NYSE:CVX), which are investing to explore Australian shale plays.

In its latest deal Magnum Hunter Resources is acquiring Australian driller Ambassador Oil and Gas for 5.1 million shares, or about $45.2 million. Ambassador Oil and Gas is a tiny exploration company that holds an exploration permit in Australia's Cooper basin, which is estimated to hold 20 trillion cubic feet of natural gas. In addition to that permit the company also holds 12,000 net acres in Colorado.

Meanwhile, Chevron signed a farm-in agreement last year with an Australian driller. Chevron is investing to acquire interests in two exploration permits as well as funding a drilling carry. But it is one of many very long-term exploration opportunities Chevron is pursuing and as the following slide notes it doesn't see the Cooper Basin delivering growth until the next decade at the earliest. 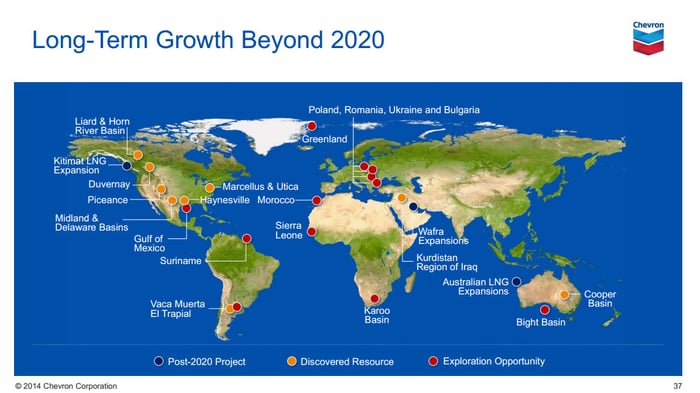 That growth will only come if these companies can economically develop Australia's shale plays. Currently, it is way too early to tell if that will ever become a reality. That's why at this point Australia is really just an interesting opportunity to watch as investors shouldn't expect big things out of its shale plays anytime soon.

Investor takeaway
That being said, Magnum Hunter Resources sees big potential for Australia to become the next center for shale activity. That is why it is making another small bet to increase its position in the country. It's a bet that could yield a big payout in the future if the shale plays can be economically developed. The fact that top American companies like Chevron and ConocoPhillips are also working on these shale plays is a positive sign, but we're still a very, very long way from these plays fueling returns for American shale drillers.