Sure, Tesla (NASDAQ:TSLA) CEO Elon Musk may speak with bias when he makes comments on the company's stock. But his thoughts on the outlook for the electric-car maker's share price are still interesting. After all, his insider stance on Tesla stock is arguably more shareholder-friendly than the majority of CEOs. So, what are Musk's latest thoughts on Tesla stock? 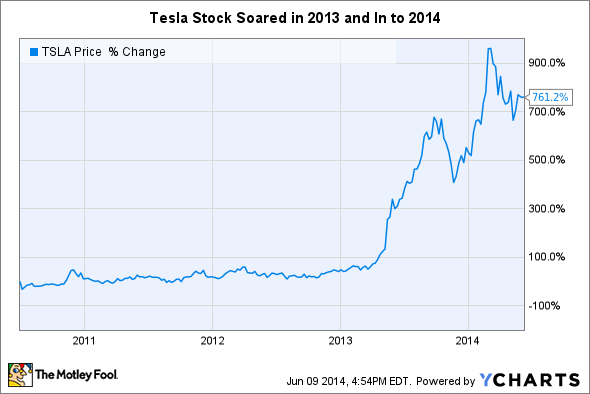 First, some background on Musk's ownership of Tesla stock.

Musk's bet on Tesla stock
Elon Musk personally believes in Tesla. There's no doubt about that.

First and foremost, he put his entire future on the line when Musk poured the remaining funds from his fortune into his two failing start-ups -- Tesla and Space X -- to save them from bankruptcy during the 2008 recession.

His passionate bet on the company is just as evident today. As Tesla's largest shareholder, Musk owns about 25% of outstanding shares. More importantly, he took loyalty to a radical level when, in late 2013 at a Tesla event in Germany, he made a promise to shareholders: "In fact, I promise that I will be the last one to sell shares."

To be fair, he also has wealth tied up in SolarCity and Space X. Even if Tesla went bankrupt, Musk would be well off. But the majority of his net worth can be attributed to Tesla Motors.

So, where does Musk think his Tesla fortune is headed?

Model S. Tesla's business today is almost entirely driven by sales of its Model S. But the market has already priced in a successful launch of its planned third-generation vehicle that Tesla says will be priced around $35,000. Musk says the company plans to launch this more affordable car in late 2016.

Warning: long-term investors only
Over the long haul, Musk think's Tesla stock is a buy, according to comments he made during Tesla's annual shareholder meeting last week. But for shortsighted investors? Not so much.

"As far as the long-term future of Tesla ... I think there's a lot of potential for growth in the stock price," Musk explained. With the help of "multiple factories around the world," Musk thinks that "there is certainly the potential there for Tesla to be one of the most valuable companies in the world in the long term, contingent upon our execution, of course."

Where is Tesla stock headed in the short term? Musk didn't care to make a prediction.

The much more difficult thing is to say, 'Well, how will the stock market value us in the short to medium term?' That is an impossible thing to say because the stock market is kind of manic-depressive. I mean, particularly with respect to Tesla, you know. But, I mean, the reason Tesla is so volatile is because so much of Tesla's value is a function of market confidence in our future execution. So, if something happens that diminishes or increases that, it has a highly leveraged effect on our current stock price. ... So I'd say, Tesla is a very good investment for the long term, but it's impossible to say what it is in the short term.

This is why it's fairly pointless for investors to scrutinize Tesla's quarter-to-quarter results. One big announcement from the company on Gigafactory plans, annual guidance, or a next-generation vehicle could have a "highly leveraged" impact on the stock price today. Instead, Tesla investors should keep focused on the big picture.

Musk served up two nice lessons for investors in general:

More specifically for Tesla investors, Musk's confidence is encouraging. Of course, his comments about the stock should be taken with a bucket of salt.