Verizon (NYSE:VZ) and Netflix (NASDAQ:NFLX) are currently playing a giant game of legal chicken. But if a blog post from Netflix on Monday is any indication, neither company is willing to swerve.

Last Thursday, Verizon threatened Netflix with "legal remedies" if it didn't immediately cease using error messages calling it out for slow network speeds. In addition, Verizon gave Netflix five days to provide not only a list of all customers who received the notices, but also any evidence in its possession substantiating its claims the slow speeds are actually Verizon's fault.

Of course, putting aside the fact Netflix has already violated the cease and desist letter by allowing the error messages continue, its five days to comply with Verizon's other requests are technically up at the end of the day today.

Legal action it is?
But that just isn't going to happen. To be sure, when Netflix posted its latest ISP Speed Index on its official blog yesterday, it seemed crystal clear the company isn't particularly concerned about meeting Verizon's demands -- at least on Verizon's terms, anyway.

For perspective, Netflix releases its ISP Speed Index each month to "provide transparency and help consumers understand the Internet access they're actually getting from their ISP." In this case, it's focused on the average Netflix stream consumers are able to enjoy, which was around 2 Mbps last month -- or significantly slower than the bandwidth most people actually purchase from their broadband providers.

Here's a look at Netflix's numbers for May: 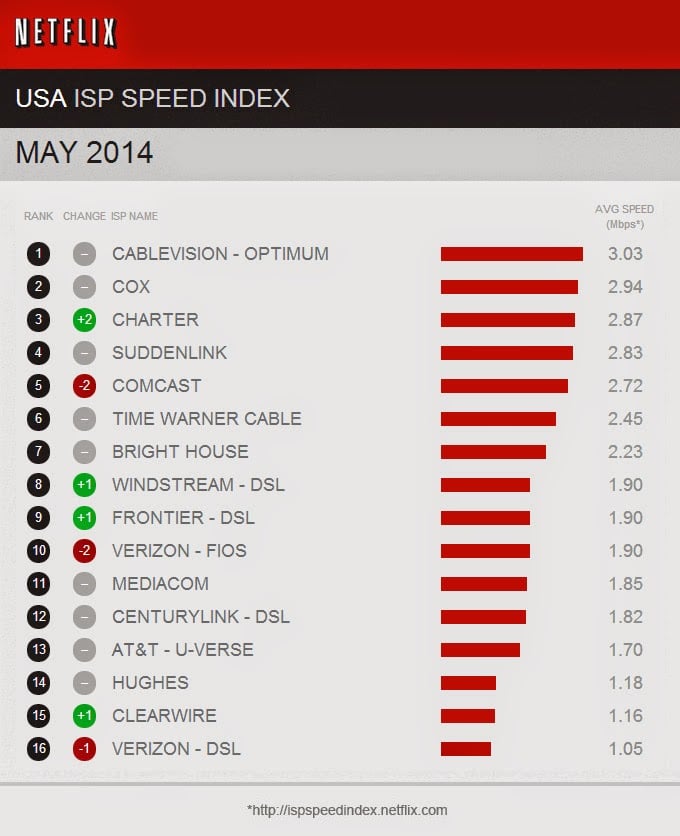 Curiously Verizon and Comcast (NASDAQ:CMCSA) were the only two companies to fall in the major ISP rankings for last month -- and Netflix even mentions the interconnection agreements it recently signed with both companies to deliver Netflix video "right to front door of an ISP." Still, the most recent post states, "Where the problem occurs is at that door [...]."

To Verizon's credit, it did only sign the deal at the end of April, and recently told The Wall Street Journal it was working to fulfill its terms "over the next few months." Even so, at least Comcast customers saw a significant increase in Netflix performance only one month following their respective deal: Comcast's Netflix speeds jumped on the ISP index from 1.68 Mbps in February to 2.5 Mbps in March.

As part of this transparency campaign, we started a small scale test in early May that lets consumers know, while they're watching Netflix, that their experience is degraded due to a lack of capacity into their broadband provider's network. We are testing this across the U.S. wherever there is significant and persistent network congestion. This test is scheduled to end on June 16. We will evaluate rolling it out more broadly.

So, what else can we glean from this? First, it's not just Verizon that Netflix is targeting, but rather any broadband provider's network where there's congestion. It appears, then, that Verizon is simply taking its negative publicity harder than most.

It also looks like the June 16 end date of Netflix's "test" was preplanned, so it isn't a direct response to Verizon's legal threat. Finally -- and in contrast to the claims of Verizon's cease and desist letter, which places the onus of performance squarely on Netflix -- Netflix elaborated on the "toll booths" being erected by some US ISPs to provide "sufficient capacity for services requested by subscribers only when those services pay the toll."

Foolish takeaway
Unsurprisingly, Netflix thinks "these tolls are wrong because they raise costs, stifle innovation, and harm consumers." And Verizon, for its part, has little incentive to play nice considering it directly benefits from those increased costs.

As one of those consumers, I'm naturally inclined to applaud Netflix for its efforts. But I'd love to hear what you think. Should ISPs be able to erect toll booths to limit high-traffic services? Or are Netflix's efforts to lower costs more self-serving than anything? Feel free to weigh in using the comments section below.