The world of connected things is quickly approaching, and these two stocks are in a perfect position to benefit.

Alright, let's admit the "Internet of Things" moniker sounds a bit too futuristic, and if nothing else it's certainly vague. If you need a primer on what it means, you can read a bit more in-depth about it here or here.

For simplicity's sake the Internet of Things, also called IoT, is the communication of devices with each other and with us. It's what will help drive home automation from companies like Nest and now Apple. Some call it machine-to-machine (M2M) communication or the industrial Internet, but in loose terms they're all talking about the same thing. Sierra Wireless (SWIR -0.58%) and CalAmp (CAMP 6.30%) are marching quickly down the Internet of Things path, and there may be good reason to follow them.

Take a look at the following chart for starters: 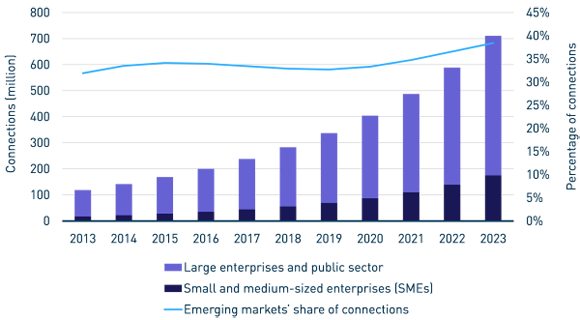 This data from Analysys Mason shows the amount of machine-to-machine connected devices that currently exist, and how many are expected by 2023. Basically we're going from a little more than 100 million M2M devices in 2014 to about 700 million in 2023. But it's not just the amount of devices that's increasing. Revenue generated from M2M hit $10 billion in 2013, and is expected to reach $88 billion within the next 10 years.

And that's where Sierra Wireless comes in. This company is helping to usher in the Internet of Things with its wireless communication modules and cloud management services. The company currently boasts about 34% of the embedded cellular M2M module business right now, which can be found in everything from Tesla's 3G connected cars to Nespresso's coffee makers.

But as with any sector, there's plenty of competition in the space. CalAmp is also firmly in the M2M space and provides everything from vehicle fleet management for Caterpillar, tracking devices for mobile assets and cloud services for its customers. It's devices collect data that businesses can then analyze for better efficiency and tracking.

Unfortunately for CalAmp investors, the stock has been hit hard over the past several months as the company hasn't performed as well as some expected. Back in April CalAmp posted earnings that missed analysts' expectations, and the company recently set earnings estimates lower than Wall Street expected as well. But while the recent returns haven't been good, the long-term play for this company could certainly tell a different story.

Looking ahead
Aside from the Analysys Mason M2M data, Cisco also has its own projections for how big the Internet of Things market will be. The company said that by 2020 there will be 50 billion devices and "things" connected to the Internet, up from 10 billion in 2013. Analysts from Morgan Stanley think that the final number could be even higher. It projects that by 2020 there will be 75 billion devices connected to the Internet of Everything.

But whether we look at Analysys Mason, Cisco or Morgan Stanley's numbers, either way it's clear that IoT is here to stay and poised to grow quickly -- and both CalAmp and Sierra Wireless and sitting in the right place to grow along with it.

Foolish final thoughts
Of course, there are things to consider when investing in either of these stocks. Though the Internet of Things could completely transform how we use devices and analyze information, it's still early in the game and thus hard to predict the real impact of such technologies.

Though Sierra Wireless and CalAmp are in a great position to benefit, investors should consider that being an early mover doesn't always ensure success. Also, as the IoT market grows, additional competitors will likely creep up which could lower costs, and margins, for these companies. But with the opportunity so huge right now, I wouldn't dismiss either company from seeing major gains from the Internet of Things and investors would be wise to at least give both a serious look.