Canada is loaded with natural resources. It has more proven oil reserves than all but two countries thanks to the oil sands. However, while the bulk of Canada's oil is found in the oil sands, the country is also discovering that it has a lot of oil off its Atlantic coast. That's actually proving to be an important emerging area for Seadrill (NYSE:SDRL).

Drilling down into Canada's Atlantic Coast

Canada has been producing oil off its Atlantic Coast for years. While it's not a lot of oil, about 280,000 barrels per day, it's about to get a whole lot bigger after Norway's Statoil (NYSE:EQNR) and Canada's Husky Energy (TSX:HSE) drilled the Bay du Nord exploration well that confirmed the existence of upwards of 600 million barrels of recoverable oil. It was one of three discoveries the pair has made in what's becoming an new emerging area for oil discoveries.

This is important to Seadrill investors because the Bay du Nord discovery was made using Seadrill's West Aquarius semi-submersible rig. That rig was also used to discover Harpoon, which is still in delineation to determine how much oil can be recovered. Finally, it's a rig that has also been doing a lot of work for ExxonMobil's operations in offshore Canada as it works to drill wells in the Hibernia field. The work that this one rig is doing is just the beginning of Seadrill's profit potential in Canada.

Just getting started
What's different with the recent discoveries by Statoil and Husky Energy is that these are being made in a new offshore area, which looks like it holds promising potential to revive Canada's offshore industry. As the following map shows the Flemish Pass is located to the northeast of currently producing fields like Hibernia, Terra Nova and White Rose. 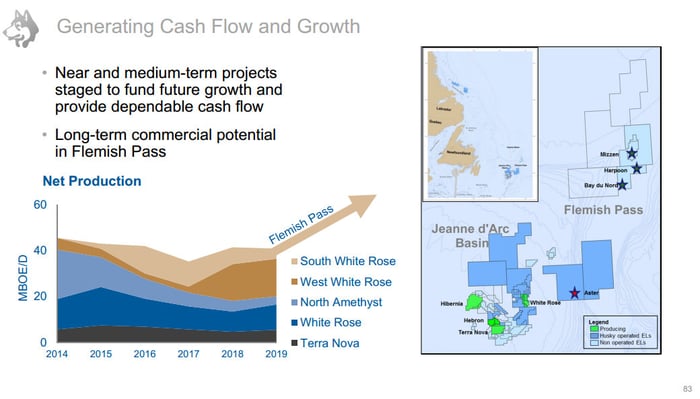 This matters to Seadrill because it has two rigs that will be working this region in the years ahead. First, the West Hercules drilling rig is expected to begin an 18-month drilling campaign in the Flemish Pass beginning in the third quarter of this year. That rig, which is leased to Statoil and owned by a subsidiary of Seadrill, is under a four year contract. In addition to that Husky Energy signed a $1.18 billion five-year lease for Seadrill newbuild West Mira, which is expected to be delivered next year. That ship was basically custom-built to suit the future needs of Husky Energy in areas like the Flemish Pass, which is why Husky Energy holds a renewable option on the lease that would likely be exercised if Husky Energy continues to find oil in the region.

Investor takeaway
Right now Seadrill will be operating up to three drilling rigs off Canada's Atlantic Coast. If companies like Statoil and Husky Energy continue to discover oil in the Flemish Pass it could attract additional participants to the region as well as encourage companies like ExxonMobil to extend its own drilling lease or even add another rig to the region. Because of this, Canada has the potential to become an important emerging deepwater growth opportunity for Seadrill as it has the rigs these companies want to use to drill in this environment.