Much of the Internet of Things conversation revolves around how consumers will benefit from devices and "things" that are able to communicate with each other. But Cisco (NASDAQ:CSCO) and Intel (NASDAQ:INTC) are taking their tech directly to the public sectors as well -- which could save trillions of dollars for cities over the coming decades.

Intel's smart city
According to Intel, today's cities consume two-thirds of the world's energy. To help curb that usage, Intel is making some big strides into connecting cities to the Internet of Things. The company is currently working with the city of San Jose to implement Intel's sensors and other tech to measure everything from pollutants in the air, to help traffic flow, improve water quality, and save energy. 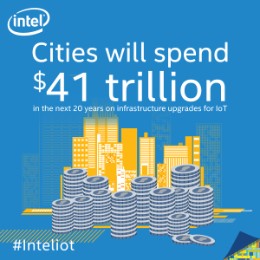 San Jose wants to give some of the data directly to its residents, so they can do things like car pool or take public transportation when the air quality is poor. Whether or not the tech actually helps individual citizens change their habits may not matter over the long-term. The smart city approach is expected to spur economic growth in San Jose and create 25,000 clean-tech jobs.

But this is just the beginning of cities getting their infrastructure systems more connected; over the next 20 years Intel expects city governments to spend $41 trillion to upgrade connecting to the Internet of Things. Even if a fraction of that is realized, tech companies could experience a big upside from the public sector investing in more efficient and smart infrastructure systems.

The upside for public sectors
While its easy to see how companies like Cisco and Intel will benefit from local government purchasing tech, Cisco thinks there could be huge savings in the public sector as well.

In a white paper released last year, the company said that the value, or overall cost savings and revenue generation, created by connecting the public sector to the IoT could reach $4.6 trillion over the next 10 years. When it comes to the Internet of Things, Cisco said that cities will generate about 63% of civilian benefits globally over the next 10 years.

The company thinks this will happen through water management, smart parking, public transportation, waste management and other efficiencies working with each other and more efficiently through automated Internet of Things systems.

Foolish thoughts
The Internet of Things is quickly becoming an important focus for Intel as the company looks to diversify revenue away from PCs. In the San Jose project, Intel is using its new, small Quark processor to help power some of the innovations, and it's likely the company will continue to lean on the chip for future IoT pursuits. Intel, like many other companies, is still in the beginning stages of IoT connectivity, but the latest collaboration with San Jose and implantation of Quark should give the company some solid experience in how to utilize its technology further in the public sectors.

As for Cisco, the company has been pushing IoT for a while, and it's no secret it believes the Internet of Things is the next big thing in tech. The company estimates there will be 50 billion connected "things" in IoT by 2020, and it's doing everything from writing research reports to sponsoring security challenges around it. While it's too early to call out winners in the Internet of Things space, Cisco is clearly trying to lead the way with its focus. If both Intel and Cisco have their way, cities will soon be leveraging the companies' technologies to make all of our lives just a bit more efficient.