The Dow Jones Industrial Average (DJINDICES:^DJI) was down 65 points at 1 p.m. EDT Thursday. This movement follows yesterday's 102-point decline in the blue-chip index.

The Dow has risen 155% over the past 62 month. And now it's approaching yet another milestone: 17,000 points. Let's take this opportunity to reflect on how far we've come and what the future may hold.

Slow-growth economy, steadily rising Dow
At least some of the Dow's impressive run is a result of just how low the market fell in the panic of the financial crisis and Great Recession. The lows Wall Street hit in 2009 were almost certainly an overreaction to some degree, so it stands to reason that the subsequent bounce would at least in part be driven by the pendulum swinging back the other way.

That said, the U.S. economy was in serious trouble in 2009 and has since recovered slowly and steadily.

Look at this chart of U.S. GDP, with the Dow Jones Industrial Average offering some context. Both metrics have been on a steady rise from the lower left to the upper right throughout this bull market. That correlation is no coincidence. 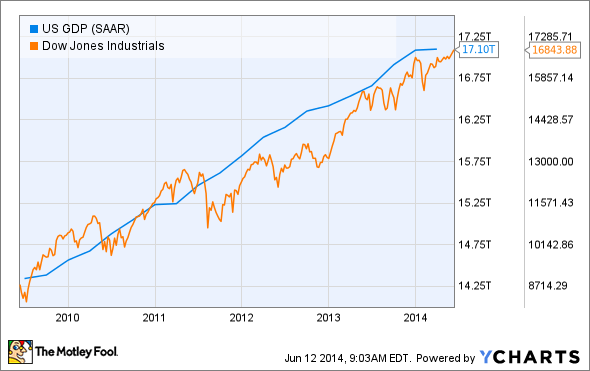 The point is, of course, that the market is being driven higher by an improving foundation in real economic terms. More people are working, the economy is more productive than ever, and businesses are profitable.

Yet there are very valid reasons to be concerned
It's not all good news these days. Corporate profits in the first quarter dropped nearly 10% from the preceding quarter, to $1.96 trillion. National gross domestic product declined at an annual rate of 1% at the same time.

And now the World Bank has lowered its expectations for global growth. World Bank President Jim Yong Kim said this week that the international financial institution expects the global economy to grow by 2.8% annualized this year, down from the projection in January of 3.2%.

Kim cited the cold U.S. winter, unrest in Eastern Europe, and rebalancing in China for the lowered forecast. For investors, the tough first quarter could signal that this bull market might be stalling out for fundamental economic reasons, even if the second quarter shows a strong bounce.

So the economy is improving, but it still has weaknesses. That's nothing new. There will always be both positive and negative indicators in a system as complex as the U.S. and global economy. 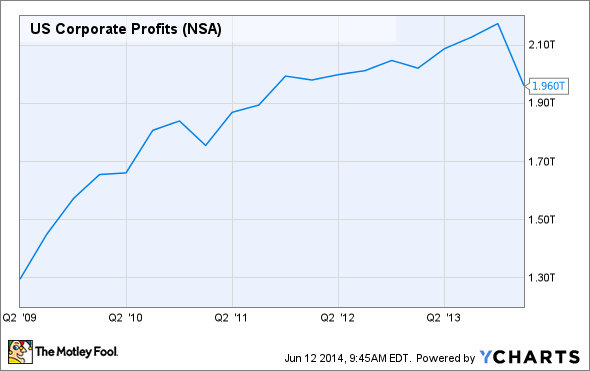 US Corporate Profits data by YCharts.

What about value? Is the market overpriced?
According to data from The Wall Street Journal, the Dow currently trades at a trailing 12-month price-to-earnings ratio of 16.48. That compares with 16.38 at the same time last year. In a long-term historical context, this level is very close to the market's average valuation.

The Dow's lowest recorded price-to-earnings ratio was 5.6 times at the bottom of the market crash of 1929. At the height of the dot-com bubble in 1999, the Dow reached a P/E ratio of 44 times. These are the most extreme examples, of course, and the Dow typically trades between 10 and 22 times earnings.

At 16.48 times today, the market doesn't appear to be markedly overvalued.

So what's an investor to do? With conflicting signals at the macro level, and pundits taking positions on both sides of the "buy or sell" argument?

The best solution is to focus on finding the best-of-the-best companies, and then buying them at attractive valuations for the long term. Investing based on macroeconomics and broad market movements is just too complex, too difficult, and too risky.

If the Dow tears through 17,000 and keeps climbing because of strong underlying economic fundamentals, that's a great thing. It means that more Americans are doing better in their financial lives.

But if the Dow stops in its tracks and reverses, don't worry. That's your opportunity to buy some of those best-of-the-best companies on the cheap.

The Dow at 17,000: Buy or Sell? @themotleyfool #stocks $^DJI Next Article
Current