The markets are struggling today, slapped down by a disappointing unemployment report. The Dow Jones Industrial Average (DJINDICES:^DJI) continues to retreat slowly from a record high set on Monday, falling 0.64% by 2 p.m. EDT.

Dow member Cisco Systems (NASDAQ:CSCO) might have been expected to avoid this negative trend. After all, Capitol Hill coverage points to a tax holiday if Cisco wanted to bring home some of its substantial international profits. The company is currently not paying U.S. taxes on $8 billion of income earned abroad over the years. It's not like Cisco is running low on operating funds, but bringing some of that bread back home without triggering a multibillion-dollar tax bill would give the networking specialist a whole new level of flexibility.

But Cisco investors aren't focusing on the potential benefits of low-cost profit imports today. Instead, shares fell 1.5% on a troubling rumor.

Two sources cited anonymous insiders who said that longtime Cisco CEO John Chambers is getting ready to retire in 2014.

According to Light Reading, Chambers could announce his retirement as early as July, then step down in September as Cisco's fiscal year draws to a close.

Rayno Report moved these dates a little bit, reporting that Chambers would probably make the announcement in September with an unknown retirement date. 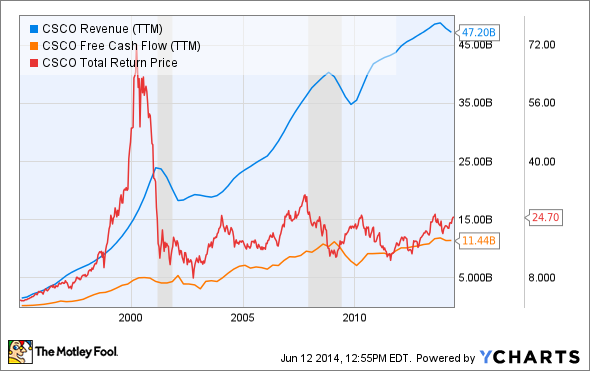 Chambers has been thinking about retirement for some time. He discussed the coming end of his career in 2012, sketching out a two-to-four-year timeline. At the time, Cisco was looking at about 10 internal candidates to shoulder Chambers' cape, and most of them are still with the company.

Unless Cisco has changed its plans in the last two years, the company is looking for a smooth transition rather than hiring a rock-star leader from the outside. It's a smart succession strategy, in line with recent internal promotions at fellow Dow members Intel (NASDAQ:INTC) and IBM (NYSE:IBM).

Like IBM and Intel, Cisco has a sufficiently deep bench to find solid CEO-level talent in the house. IBM leader Ginni Rometty was launched into rough waters from the start, and Big Blue's shares have lagged the Dow since she took office. Likewise, Intel CEO Brian Krzanich took the helm in the midst of a strategy overhaul. IBM is becoming a cloud computing specialist and Intel is looking for a foothold in mobile markets.

Just like his fellow big-name tech CEOs, Chambers has already embarked on a game-changing strategy shift. It'll be up to his successor to complete that journey toward a one-stop information technology shop, which is another reason why an internal hire makes sense. Someone like Cisco COO Gary Moore or CFO Frank Calderoni could hit the ground running, since they've been immersed in Chambers' thinking for many years.

If Cisco investors are taking Chambers' retirement rumors seriously, it's because they make sense from a variety of angles. And if this event is seen as a negative catalyst, well, nobody can play John Chambers quite like John Chambers does. Don't forget that uncertainty is uncomfortable, and a nameless CEO replacement certainly raises Cisco's mystery level.