Jan-e- Alam
(CFS)
Author Bio
Jan-e-Alam writes mostly for the Motley Fool energy and materials sector. He has been writing for several financial media websites for a few years now and other than materials/energy sector also covers financials and industrials. He holds an undergraduate degree from Loughborough University and is a CFA Level III Candidate. He has also worked for a bulge bracket bank in the past.

Travelers Companies (NYSE:TRV) the only property and casualty insurer in the Dow Jones Industrial Average, has a strong a balance sheet and offers solid return on equity (ROE). The insurer's high-quality management, potential for strong book-value growth, and better than average underwriting performance make Travelers one of the strongest names in the property and casualty space.

While the company remains focused on returning capital in excess of its growth needs to shareholders and on maintaining its long-term midteens operating ROE target over the cycle, Travelers could face challenges in achieving this target in the current low interest rate environment.

Return to shareholders better than peers and financial sector broadly
The Travelers Companies has a history of posting returns that are better than most banks and other large financial institutions. Over the period of 2005-2013, in an increasingly regulated environment, the firm's ROE outperformed not only its P&C peers but also life insurers and banks. 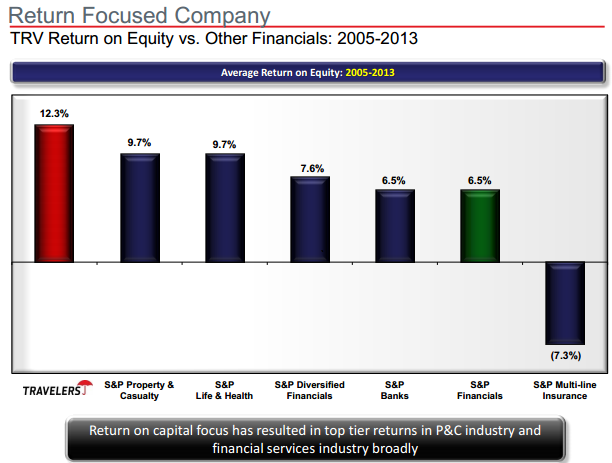 This strong performance was not limited to the period that included the financial crisis. In 2013, and Travelers outperformed its P&C peers and financials industry broadly. Travelers had a return on equity of 14.6% in 2013, compared to 11.8% of banks, 9% of S&P financials, and 7% of S&P multiline insurance groups. 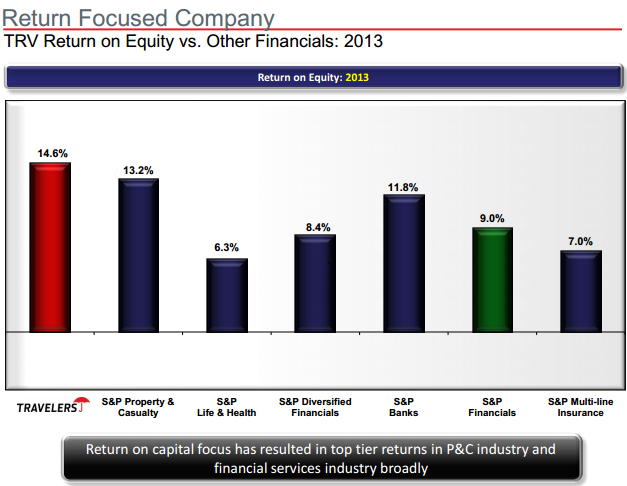 Commenting on this outperformance, Travelers' CEO Jay Fishman said, "Investors are going to begin to contemplate, in this new arena of regulation, have relative returns within the financial sector changed?" He further said, "I'm not coming to any conclusions here. I'm just sharing data with you, but I do think it's going to be an increasingly relevant question."

Aggressive capital management likely to continue
Travelers Companies aggressively continues to buy back shares. In addition to $705 million that the company bought last quarter, the company repurchased $587 million worth of shares in the second quarter (through May).

Since 2006, the firm has bought back almost 60% of its outstanding shares (market cap in 2006). Including dividends, the insurer has returned over $28 billion to shareholders during the same period. The amount is quite close to the company's current market capitalization $32.8 billion. 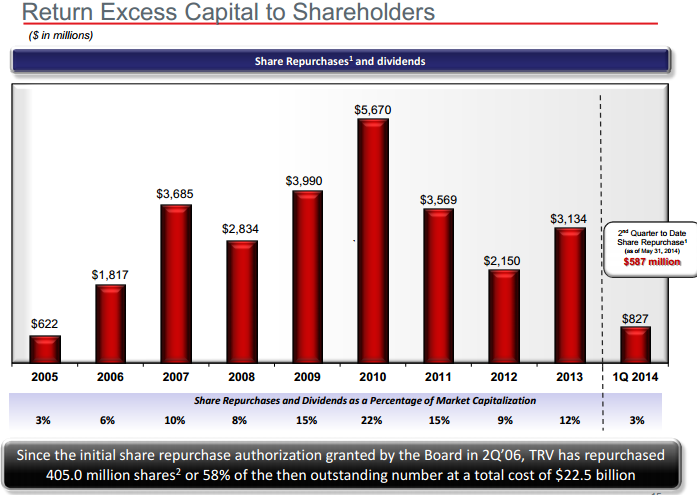 The insurer has also increased its quarterly dividend for 10 consecutive years, growing at a CAGR of 10.1% from 2005-2013. Travelers Companies has a dividend yield of 2.3%, compared to 1.9% of Allstate and 1.7% of Aspen Insurance Holdings. The New York-based Travelers pays a quarterly dividend of $0.55 (annualized $2.20). If the company keeps it dividend unchanged until the end of the year, it will mark the 11th consecutive year of dividend growth.

Given Travelers strong earnings profile, the insurer is likely to continue with its aggressive capital management policy. The company expects share buybacks and dividends for 2014 to be roughly in line with the operating earnings. 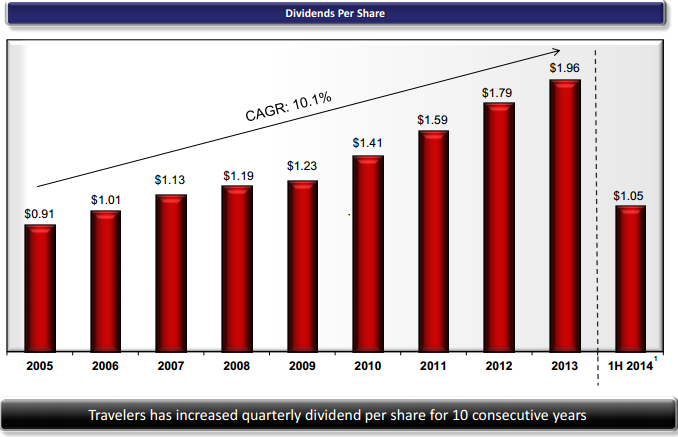 Bottom line
The Travelers Companies has a strong a balance sheet and offers solid return on equity. The insurer remains committed to generating midteen operating return on equity overtime and return capital in excess of its growth needs to shareholders.

Finally, Travelers' high quality management, potential for strong book value growth, and better than average underwriting performance make the insurer one of the strongest names in the property and casualty space.

Financial Crisis or Not, The Travelers Companies, Inc. Offers The Strongest Returns Out There @themotleyfool #stocks $TRV Next Article
Current