Two VoIP providers in particular are worthy to look at. VoIP is ready to grow further, established by the widespread adoption of integrated based VoIP solutions and the rise of market leaders in the VoIP space such as WhatsApp, Skype and Viber. The deployment of 4G networks and LTE will revolutionize the quality of VoIP services and will move it into a standard way of communicating.

The first one is a company called Vonage Holdings (NYSE:VG) and the second is magicJack VocalTec, Ltd (NASDAQ:CALL).

Both companies should benefit as VoIP markets expand. According to market research firm In-Stat there will be more than 288 million mobile VoIP users this year. Market intelligence from Infonetics Research forecasts that VoIP services revenue will hit $88 billion by 2018. Conversely, in 2013, the firm reported that the global market brought in $68 billion in revenues.

According to experts of TheDigist.com, Vonage is one the best business VoIP providers. Vonage Business Solutions, formerly known as Vocalocity, provides VoIP services to small and medium-sized businesses. It offers scalable business VoIP package plans of all kinds that are customizable to the company's needs.

Last year Vonage announced a new partnership in Brazil, and this venture could profit hugely from the 2014 World Cup that starts at June 12. The Brazilian market is large and growing quickly, with more than 22 million of its 67 million households already broadband connected. Brazil also has more than one million expats and has a vibrant small-business community that will be beneficial for Vonage.

magicJack
The second company that is worthy a look is called magicJack. It is also a cloud-based communications company. The firm is the inventor of magicJack devices. It allows phone services for free to anywhere in the US and Canada. The company also provides additional products and services, which include voice apps on smart phones. magicJack's voice app, magicApp, is already used by almost 7 million users.

On May 12, 2014 the company announced that it entered into a Strategic Commercial Agreement with Telefonica, S.A. magicJack will be able to offer their products and services, including the magicJack device and the magicJack APP, in multiple countries throughout Latin America.

A pilot will be launched in the second half of 2014. If the pilot is successful, the company will aggressively marketing their offerings toward the end of 2014 and into the beginning of 2015.

Telefonica, S.A. has approximately 185 million mobile customers and 25 million landline customers in Latin America, so if magicJack could monetize its offerings wisely they could generate a healthy profit.

Business VoIP
Business VoIP services could be the growth engine for both stocks mentioned above.

For example, the total SMB market for voice service in North America is $15 billion in revenues and 32 million lines. The transition to hosted VoIP is still in its early stages with less than 15% of companies having made the switch. Frost & Sullivan expects this market to grow by 28% annually over the next five years.

Growth Drivers
Both companies have had some growth pains. But I believe Vonage and magicJack have strengthened their business and stabilized their customer base. An example is Vonage's gross line additions growth, see graph below. 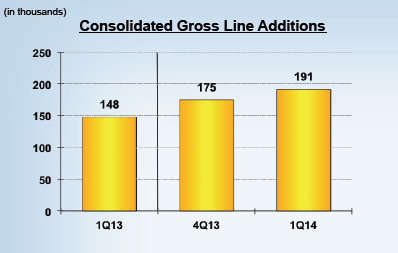 Growth will remain their top priority and expanding into new segments and international markets, such as Latin America, will be the key drivers for both companies to fuel revenue growth.

The coming quarters are important for investors and will show if the compelling growth story is intact.

In April Vonage launched its consumer VoIP service in Brazil, so this could be beneficial for their quarterly results. magicJack in the other hand has to wait a little before they could benefit from Latin America.

Caveat
Disruptive news for VoIP providers such as Vonage and magicJack could be the fact that Apple's new operating system, iOS 8, will allow you to make calls over your WiFi connection. Indirectly this would lead to new competition.

Of course VoIP is more than wireless M2M software used on cellular phones, that's why I don't think Apple would hurt both companies bottom line.

Final Note
Over the last decade, VoIP has changed the way people communicate with each other. VoIP has become a technology that is growing rapidly every year. The key market driver are the major cost savings that VoIP offers to both enterprise as well as residential users as compared to traditional telephony.

Both companies are changing their focus to emerging markets, which will fuel its growth going forward. Vonage is the first one that will profit.