Eagle Rock Energy Partners LP (NASDAQ: EROC) has been gradually marching lower since the first half of 2011. Although we don't know whether its closing price of $4.41 on Wednesday, June 11 was a new floor for the time being, we can assess the company's fundamentals and recent strategic moves to see if there's a case for stronger performance in the future. 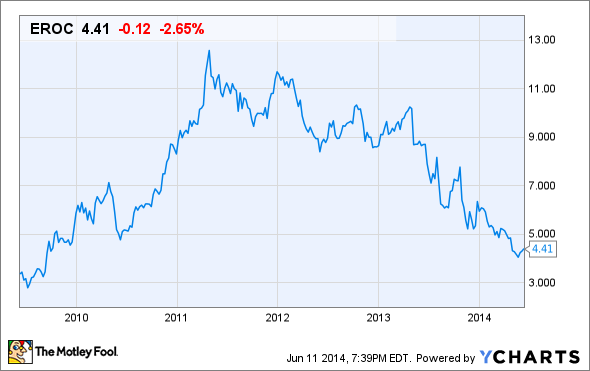 A $1.325 billion, business-transforming decision
In December 2013, Eagle Rock agreed to sell its midstream business to Regency Energy Partners LP (NYSE: RGP) for up to $1.325 billion. As an upstream and midstream oil and gas company, this deal is a transformational decision as Eagle Rock will become a pure-play upstream firm. Although the deal has not yet closed due to an FTC request for additional information, Eagle Rock and Regency provided the requested documentation, and the sale is expected to be approved in the coming weeks.

Eagle Rock Chairman and CEO Joseph A. Mills stated that, "This transaction is consistent with our stated goals of simplifying our structure and reducing our debt balances." Debt has been one of the company's major problems over the past few years. 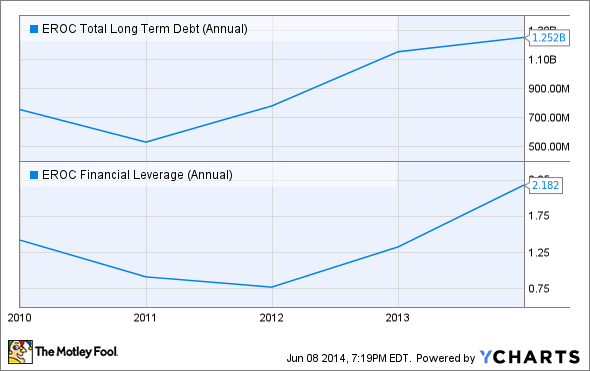 The debt burden became a growing concern for investors and management in 2013. Thankfully, management has taken steps to address the problem instead of allowing it to worsen.

Debt-slashing and stabilizing efforts
While some of these steps may be difficult for investors to accept in the short term, they are strengthening the soundness of the company's structure and the stability of its operations. Eagle Rock has taken the following steps since fall 2013:

Eagle Rock opted to slash its quarterly distribution from $0.22 to $0.15. The company did not generate enough distributable cash flow in Q3 2013 to sustain the $0.22 distribution. Borrowing funds to cover the distribution would have only worsened the company's problems, so management wisely avoided that option. The company has been trying to steadily increase its distribution coverage ratio so that it sits comfortably above 1.05. For Q3 and Q4 2013, the company held distribution coverage ratios of 1.06 and 0.77, respectively. According to a February 2014 press release from Eagle Rock announcing Q4 2013 and full year financial results, the serious $5.4 million fall in distributable cash flow from Q3 to Q4 2013 was "primarily attributable to lower adjusted EBITDA and slightly higher maintenance capital expenditures in the fourth quarter."

2. The sale of midstream assets to Regency

As noted, the sale of Eagle Rock's midstream assets to Regency will transform its business. It will also improve the company's financials. Between the proceeds from the sale and Regency's assumption of $550 million of Eagle Rock's debt, management expects to reduce its debt burden by about $1 billion in total. If the plan pans out, debt would be reduced to right around $250 million -- the lowest it has been in years.

3. The suspension of the distribution in April 2014

The company chose to suspend its distribution to preserve some liquidity leading up to the midstream assets sale. Although shares plunged by 17% the day after the distribution suspension was announced, this was a fundamentally sound decision to maintain financial flexibility. Further, management expects to restore the distribution after the sale is completed. 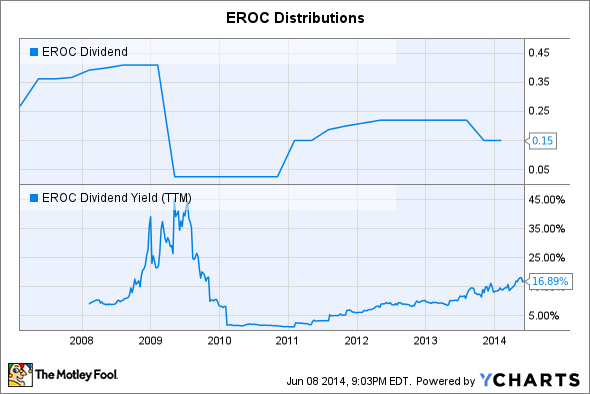 First, it has historically paid considerable distributions with one of the highest distribution yields among MLPs. By the time the distribution is restored, the company will have much stronger financials due to the midstream asset sales and the payment of its debts. It is likely that the distribution will be restored to its previous level or higher.

Second, Eagle Rock has upstream operations in both booming and promising areas. The company has operations in the Permian Basin, the Barnett Shale, and the Eagle Ford Shale. It is also betting big on emerging plays in Oklahoma, including the Cana Shale, where the company has a stake in 72 producing wells, and the South Central Oklahoma Oil Province, where it holds about 16,500 net acres. Energy giants Continental Resources (NYSE:CLR) and Marathon Oil Corporation (NYSE:MRO) are also scooping up holdings in the SCOOP area. Continental leases 170,600 acres and Marathon holds over 100,000 net acres.

Eagle Rock's presence and production in this combination of current boomers and potential future boomers bodes well for the company's operations in the medium to long term.

Foolish conclusion
For the past few years, Eagle Rock has struggled with a large debt burden -- a problem that many oil and gas companies engaged in shale operations face today. What makes Eagle Rock different is that management has been willing to address the issue and make the tough calls that upset investors in the short term, but position the company for success in the long term. After shedding weaker areas of its business and shoring up some of its shortcomings, Eagle Rock should soon be able to soar higher than it has in many years.