As Apple (NASDAQ:AAPL) stock continues its rebound on a trajectory that looks headed toward its post-split adjusted all-time high of just over $100, the bear case for the most closely followed stock in the United States seems to be getting less negative coverage than in the past. On that note, maybe it's time for investors to check in on their assumptions baked into the stock's current valuation. Does Apple really deserve to trade just about $10 shy of its all-time high achieved in 2012? After all, were talking about a $550 billion market capitalization in a post-Steve Jobs era.

The challenge
As I attempted to make the doom-and-gloom case for Apple stock at $91.28, I kept running into walls. Maybe I'm biased. After all, I do own a number of Apple products, and the stock is my second largest holding.

On that note, I thought it might serve as a useful exercise to challenge readers. There is undoubtedly someone out there who is sure Apple stock is overvalued. If that's you, the market could use your opinion right now. It's always a good idea to consider both sides of any story. And considering the recent run-up in Apple's share price, there couldn't be a better time to hear out the bear case for the world's most valuable publicly traded company.

So if you refuse to buy Apple stock or (perhaps even better) have shorted the stock, please consider sharing your reasons in the comments below.

The bear case is difficult
I tried approaching the bear case from several angles. Here were some of the key areas that made my doom-and-gloom case for Apple stock difficult.

iPhones. Apple's smartphone segment makes up more than 50% of its revenue. If sales were to decline, it could be very bad for the stock. But Apple's alleged move to launch models this year with larger displays means the company will be adding models to a hot and proven market. With this in mind, I have trouble imagining that the important segment will suffer any time soon.

Over the longer haul, Apple's consistently high retention, thanks to its "sticky" ecosystem of integrated hardware, software, and services, seems poised to bring customers back for new models.

Then there's the overall global smartphone market, which is still growing robustly. In 2014, IDC pegged the growth in unit sales at 38.4% over the year before. And there's plenty of room for further growth; in 2013, about 45% of the global population wasn't using smartphones yet. And, of course, smartphone sales will mostly come from upgrades -- not new customers. Fortunately for Apple, the average upgrade cycle among iPhone users is a very short two years.

Innovation. It's easy to say Apple can't innovate in the post Steve-Jobs era simply because the company lost the iconic CEO who transformed the company and launched a stream of revolutionary new products like the iMac, iPod, iPhone, and iPad. But Apple has fared particularly well since Jobs resigned. The stock is up 80% and revenue is up about 63%.

Worries about Apple's lack of new products in new categories looks ready to come to an end. Apple CEO Tim Cook has promised to deliver on this front in the near future. And Apple seems confident in its overall lineup of upcoming products. Apple Internet software and services chief Eddy Cue said at the Code Conference last month that Apple has "the best product pipeline I've seen in my 25 years at Apple."

Valuation. It's rare that an industry-leading cash cow trades at a discount to the overall market. But that's the case for Apple, which currently trades at a price-to-earnings ratio of 15.3. Compare that with the S&P 500's P/E of 19. Does Apple really deserve such a conservative valuation, especially considering its aggressive share-repurchase program that will probably add meaningful leverage to the company's earnings-per-share growth, going forward? 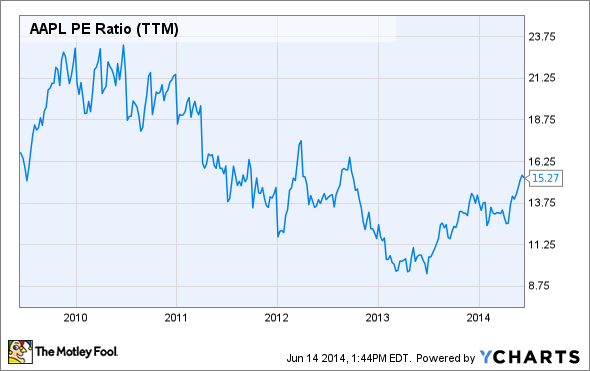 Obviously, there are far more factors that will make or break Apple in the coming years. But these are three essential pillars for the company, and they all seem to suggest that Apple stock still looks like a great long-term holding.

What am I missing? Can anyone articulate the bear case for Apple stock? Thanks in advance for any thoughts.