Online travel booking website Priceline (NASDAQ:BKNG) is now trying to enter the world of online dinner reservations. On June 13, the company agreed to buy OpenTable (NYSE:OPEN), a massive real-time restaurant-reservation service that covers thousands of restaurants in most U.S. states as well as in several major international cities.

The deal is huge, even for Priceline, which spent $1.8 billion last year to take over competitor Kayak, a travel comparison site. For OpenTable, Priceline will be paying $2.6 billion in cash, hoping that the consolidation of the businesses of flight booking and restaurant reservations creates valuable synergies. Is this a good deal? 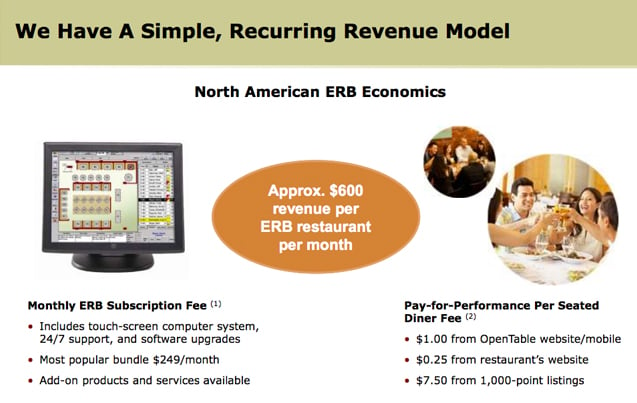 The deal
The recent acquisition is by far Priceline's largest deal in its history. Note that the deal was not driven by a slowdown in Priceline's main business, according to Priceline CEO Darren R. Huston. After all, Priceline has reported seven straight years of rising profit. Plus, in the last-reported quarter, Priceline's overall bookings showed a 34.2% year-over-year increase.

The move will allow Priceline to own a database of more than 31,000 establishments, most of them in the U.S. Roughly speaking, these establishments seat more than 15 million diners per month.

Catching up with TripAdvisor?
The move could be seen as a reaction to the acquisition of Paris-based online reservation service La Fourchette, by competitor TripAdvisor (NASDAQ:TRIP), which occurred last month. La Fourchette has more than 12,000 restaurants under its network, with a strong presence in France, Spain, and Switzerland. The company, like OpenTable, also provides software solutions that provide restaurants with dynamic real-time booking, discount systems, and data tools.

The premium
In terms of premium, Priceline offered $103 a share in cash for the company. This is equivalent to a 46% premium over OpenTable shares' closing price on June 12. According to data compiled by Bloomberg, this is the highest premium since 2007 for a North American Internet deal of more than $1 billion.

Initial market reaction
Not surprisingly, shares of OpenTable were up more than 45% on June 13. Shares of companies providing similar services also rose. Shares of business review site Yelp were up more than 13%, and shares of food-delivery service GrubHub rose more than 6%. Interestingly, shares of Priceline were down only 2.1% after the deal announcement, suggesting that overall investors appear to believe that in the long run, Priceline will be able to recover its money.

From now on
OpenTable, which gets $1 from a restaurant if a diner reserves a table through its app, generated just $53.8 million in revenue in the last quarter. Annualizing this number and assuming no growth, the acquisition would bring $215 million in revenue  to Priceline. This would have little impact on Priceline, which reported revenue of $1.64 billion in the most recent quarter.

Still, there's plenty of room left for growth in OpenTable's business. And because most of the restaurants in OpenTable's network are located in the U.S, the main challenge for Priceline -- which has plenty of experience in the field of acquiring tech companies -- is going to be the international expansion of OpenTable.

To make OpenTable popular in international markets, Priceline could drive traffic to OpenTable by using its various international websites. For example, Priceline could use Agoda.com, an online accommodation-booking service with strong presence in Asia Pacific,  to bring OpenTable to Asia. The company could also use Active Hotels, a hotel-booking service specialized in the European market, to increase the European exposure of OpenTable.

Final Foolish takeaway
Priceline's acquisition of OpenTable is simply huge. This is the highest premium since 2007 for a North American Internet deal of more than $1 billion. However, Priceline can do a lot with this acquisition. The company turned Booking.com -- a $25-million-a-year business acquired in 2005 -- into a huge global business that deals with more than 550,000 room nights reservations per day. It could make OpenTable popular in Asia and Europe by driving traffic from its localized websites to OpenTable's app.