Acquisitions have been the name of the game in health care this year, but Medtronic's (NYSE:MDT) shocking buy of device maker Covidien (NYSE:COV.DL) over the weekend sent quakes rippling throughout the medical device industry. The $43 billion deal, the largest in medical device history, adds serious strength to Medtronic's portfolio, already the largest by revenue among pure medical device players.

But this deal's not just about Medtronic's size and strength in the device industry. It's also a major step forward for a company that's struggled to generate consistent growth -- and an open window into new growth opportunities and cost savings that only will brighten this company and stock's long-term future.

New growth awaits
It's no secret that Medtronic's stock could use a lift. The company's as stable a business as they come in the medical device sector, but pricing pressure and stiff competition in the firm's core cardiac device business has stifled growth in recent quarters. While Medtronic's long-term future looks stout, its stock has trailed top competitors in this industry such as Boston Scientific (NYSE:BSX) and St. Jude Medical (NYSE:STJ) significantly over the past year. 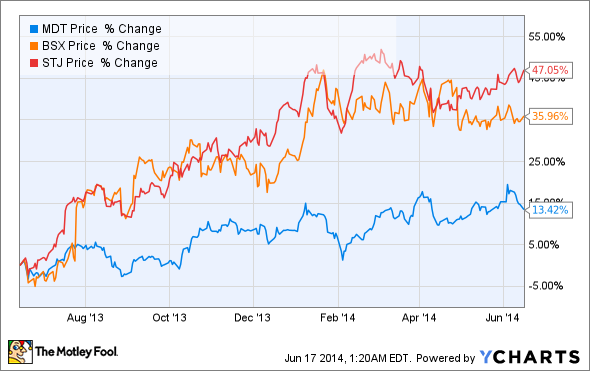 Buying Covidien, however, opens up a new array of product areas to compete in without reaching too far from Medtronic's own core businesses. Covidien's a major player in the surgical tools industry: It's the company's largest business by revenue, and it chalked up 4% sales growth in the company's most recent quarter. While Medtronic owns its own small surgical device segment that saw 10% growth in its most recent quarter, Coviedien's business dwarfs its unit in sales by a factor of four.

Covidien has also made moves recently in unearthing new growth opportunities via its own acquisitions that should pay dividends to Medtronic down the road. The former's purchase of endoscopic device innovator Given Imaging -- an $860 million deal that closed just this February -- was already projected to add $50 million in quarterly revenue. Given's PillCam, an imaging capsule that can snap photos inside the body after being swallowed, offers a less-invasive opportunity in a market that's growing around the world.

Research firm MarketsandMarkets projected that the worldwide endoscopic tools market will grow from more than $28 billion in 2013 to nearly $38 billion by 2018. Innovation is a key to market share growth and sales gains in this fast-paced industry, and Covidien -- and now Medtronic -- have a powerful weapon courtesy of Given's PillCam, which is approved in dozens of countries, including the U.S.

That also comes with another advantage, however: MarketsandMarkets projects the endoscopic market to boom overseas in Asia, and Medtronic has been upfront about its desire to increase its international gains, particularly in emerging markets. Covidien racked up nearly 15% of its total sales from emerging markets in its most recent quarter and notched 14% operational revenue growth from developing economies. The company's surgical tools division has been a big driver there, reeling in 18% operational growth in emerging markets in its past six months. That's a bonus to Medtronic's purchase of China's Kanghui Holdings, an orthopedics and surgical tools maker, back in 2012 in a deal worth more than $800 million.

Between beefing up its innovation, expanding its reach across the medical device field, and increasing its presence in emerging markets, Medtronic's growth potential opens up sharply with Covidien in the fold. Yet the greatest impact for the world's largest pure medical device player won't be felt in the coming quarters, but in the long-term future, where Covidien's addition strengthens an already promising road ahead.

Firming up the foundation
Hospital budgets in the U.S. have been stretched thin from health care reform and more, and pricing pressure has slammed growth in Medtronic's cardiac device business, its largest unit by sales. The company saw its Cardiac and Vascular Group revenue inch higher by a mere 1% in its most recent quarters -- a trend that's hit rivals across the industry. Competitors St. Jude Medical and Boston Scientific have each dealt with sluggish or sliding sales: St. Jude's own vascular products group saw sales nose down by 1.7% in its most recent quarter, while revenues from core products such as defibrillators have struggled to make much traction. Boston Scientific managed 2% growth in its cardiovascular group in its last quarter, but overall revenue growth has been elusive.

While Covidien's buy won't solve that problem overnight for Medtronic, it will add significant muscle through its own vascular products division -- which has similarly struggled with substantial growth. That won't excite investors much in the near term, but it will bolster Medtronic's size advantage over its chief competitors like Boston Scientific and St. Jude.

That's a much more critical opportunity in light of the aforementioned pricing pressure from hospitals and payers. Medtronic's size and newfound breadth will give it more leverage in negotiating with cost-conscious hospitals, particularly by allowing them to concentrate purchases with fewer suppliers and capitalizing on economies of scale. The savings aren't just for the buyers, either: Medtronic and Covidien figure that their combined firm will rack up $850 million in annual savings by 2018.

Of course, no analysis of this buy is complete without mentioning Medtronic's move to incorporate abroad. By purchasing Covidien, Medtronic's on the cusp of unlocking tax savings in corporate-friendly Ireland, continuing an offshoring trend in the health care sector that Pfizer and AstraZeneca made front-page news over in the former's failed attempt to acquire the latter.

While Medtronic has played up its innovation and investment advantages in this deal rather than discussing the overseas incorporation in depth, there's no doubt that moving abroad will benefit the company -- and investors -- in the long run. Medtronic's built up a veritable gold mine of offshore holdings over the years, with more than $20 billion in untaxed cash overseas, according to Bloomberg. Making the most of that cash pile, whether through smart investments (the company specifically mentioned that it plans $10 billion in U.S. R&D investment over the next decade) or by returning value to shareholders, will delight long-term investors.

Analysts also have pointed out the strength in synergies and to free cash flow that the deal will create for Medtronic, helping this dividend aristocrat keep up with yearly dividend increases for the forseeable future. Growth opportunities aside, Medtronic's already one of the top dividend stocks in the health care sector. Adding more ammunition to the stock's 1.8% yield only makes this merger more attractive in the long run.

Upside in the long run
Covidien's purchase won't shake up Medtronic's financials overnight, but the impact from this monumental deal will shake up the firm's future for a long time to come. Medtronic's new growth opportunities, both in expanded product areas and in overseas growth, will help to bolster a product portfolio that's struggled to delight investors recently. The moves will only help the company gain an advantage in negotiating pricing with hospitals -- and through cost savings, will keep its sweet dividend growing in the long run. For investors in both companies, this deal's a huge hit.