Chesapeake Energy Corporation (OTC:CHKA.Q) is an oil and gas exploration and production company. Chesapeake Energy also held midstream assets until 2012, when it sold its pipeline interests, including its stake in what is now Access Midstream Partners LP, for over $4 billion to private equity firm Global Infrastructure Partners.

What is the company's position today, and where might it be headed? Let's take a peek.

Company leadership
Chesapeake Energy was co-founded in 1989 by former President and COO Tom L. Ward and former CEO Aubrey McClendon -- more on him later. Today, a few of Chesapeake Energy's key leaders are:

1. Mr. Robert Douglas Lawler, CEO, President, and Director
Lawler assumed these three positions in June 2013. He began his career in 1988 with Kerr-McGee Corporation after graduating with a Bachelor of Science in Petroleum Engineering from the Colorado School of Mines. Lawler went on to earn his MBA from Rice University in 2002 and stayed with Kerr-McGee Corporation until 2006, when it was acquired by Anadarko Petroleum Corporation (NYSE:APC). He joined Anadarko Petroleum Corporation and served in increasingly senior roles before joining Chesapeake Energy. Lawler has many years of experience in the industry along with wide geographic exposure and functions in operations, analysis, and planning.

2. Mr. Domenic J. Dell'Osso, Jr., CFO and Executive VP
Dell'Osso was appointed to his current position in November 2010. He holds degrees from Boston College and the University of Texas at Austin. From 2004 to 2008, he worked as an energy investment banker. In August 2008, he joined what is now Access Midstream Partners LP as its CFO and Vice President of Finance.

3. Mr. M. Chris Doyle, Senior VP-Operations, Northern Division
Doyle was appointed to his current position in August 2013. He is a 1995 graduate of Texas A&M University and a 2007 graduate of Rice University. Like Robert Douglas Lawler, Doyle worked at Anadarko Petroleum Corporation, where he spent 18 years in increasingly senior roles. He has international experience in Algeria and the United Kingdom, and oversaw Anadarko Petroleum's Southern and Appalachian operations, strategic planning, reserves estimation, and financial planning.

4. Mr. Mikell J. "Jason" Pigott, Senior VP-Operations, Southern Division
Pigott was appointed as Senior VP of Operations for the Southern Division in August 2013. He holds a degree from Texas A&M University and, like Lawler and Doyle, worked at Anadarko Petroleum Corporation prior to Chesapeake Energy. At Anadarko Petroleum, Pigott managed its Eagle Ford team and was a senior planner for southern and Appalachian operations.

It isn't a coincidence that many of Chesapeake Energy's executives are from Anadarko Petroleum, or that they joined the firm around the same time.

Transitioning from the McClendon era
Chesapeake Energy's founder and former CEO Aubrey McClendon left the company on April 1, 2013 under pressure from shareholders and the board of directors. The company's shareholders and board of directors pressed for new leadership because McClendon's questionable activities put Chesapeake Energy in a precarious position. McClendon made extensive use of a provision that allowed him to take a 2.5% stake in every well that Chesapeake Energy drilled, provided he paid his proportional cost for the well. He used his well stakes as collateral to borrow over $1 billion from investment banks and private equity firms. McClendon's activities invited an SEC probe, which recently ended with no charges pursued.

McClendon also aggressively overspent funds to chase after growth, financing expansion with debt. The company's expenditures exceeded its revenues from 2001 to 2013. Debt skyrocketed. 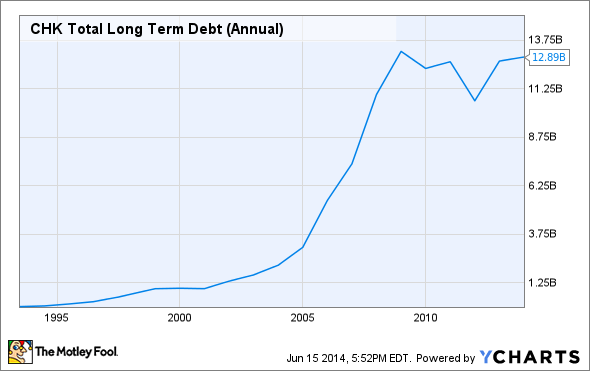 The company's debt has emerged as one of its major strategic challenges over the years. It was compounded by the crash in natural gas prices after 2008, but the company's unwise spending predated the crash. In 2012, Standard and Poor's lowered Chesapeake Energy's credit rating to BB- over concerns regarding the company's debt levels and poor management under McClendon. 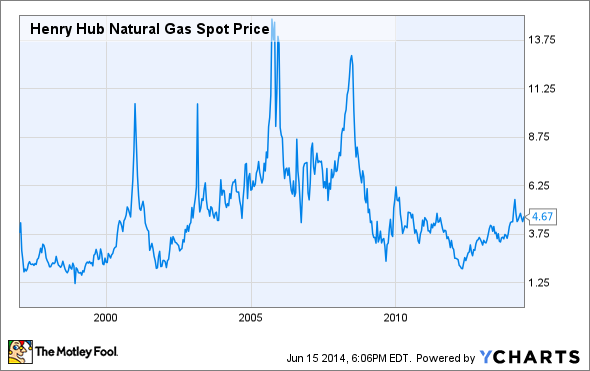 In the year that Robert Douglas Lawler has been CEO, Chesapeake Energy has seen many changes. First, he brought in colleagues from Anadarko Petroleum to replace select executives from the McClendon era in an effort to improve performance and turn the page for the company. Second, the company has managed to cut capex and operating expenses. Third, the company has been selling assets to pay down debt, and its board approved plans this month to spin off its oilfield services division into the publicly traded Seventy Seven Energy. Although the oilfield services division generated about one-eighth of Chesapeake Energy's revenues in 2013, the company expects the spinoff to eliminate $1.1 billion of its debt load.

The company is telling anyone who will listen that it is changing its approach to business. So far, company moves are reflecting this. Investors have reacted well to these material changes in the way Chesapeake Energy operates over the past year, as evidenced by its increasing share price. 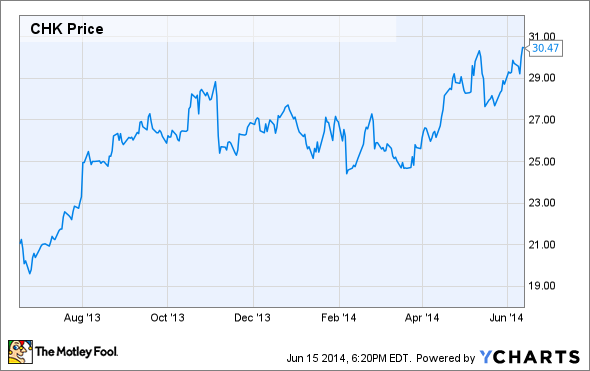 Foolish conclusion
Moving forward, Chesapeake Energy looks to be on the right track. It is actively addressing a crippling debt load and fighting to move on from the McClendon era. Although tough choices are being made with respect to divestitures and capex, these choices will better position Chesapeake Energy for future success.

A Peek at Chesapeake: An Energy Company in Transition @themotleyfool #stocks $CHKA.Q $APC Next Article
Current