In a recent press release, 3D Systems (NYSE:DDD) proclaimed its fab-grade 3-D printers "break the speed barrier surpassing traditional injection molding." The company even made a video to celebrate the achievement.

Unfortunately, this claim has more marketing spin than actual truth.

3D Systems is trying to dispel a conventional belief in manufacturing that injection molding is among the fastest options for larger-scale manufacturing runs, and instead, product manufacturers should consider 3D Systems' industrial grade 3-D printers for a faster alternative. 3D Systems accomplishes this is by comparing the time it takes to manufacture 2,400 miniature lampshades with injection molding to the time it takes to 3-D print the same number of lampshades with its leading stereolithography printer.

Naturally, 3D Systems proves that in some cases, a large enough print bed coupled with a small enough object does mean 3-D printing is faster than injection molding -- assuming the print bed is filled to capacity. What 3D Systems fails to mention is had those mini lampshades doubled in size, it would've doubled the time it took produce the same amount of lampshades. In other words, the size of the object, relative to the print bed is directly correlated to the time it takes to 3-D print each object. It should be painfully obvious that injection molding still remains a significantly faster option than 3-D printing in nearly every non-miniaturized application.

An unhealthy obsession
For whatever reason, 3D Systems is borderline obsessed with comparing the pace of its product improvements to Moore's Law. In the marketing installment above (at the 1:25 mark), 3D Systems asserts that its product improvements are part of "Moore's Law at work." However, Moore's Law only applies to the trajectory of semiconductors and has absolutely nothing to do with 3-D printing technology. 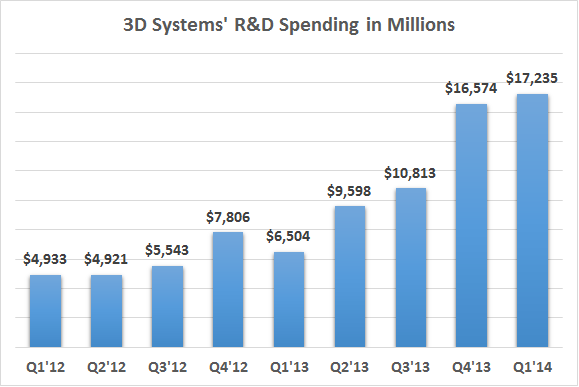 3D Systems investors should keep in mind that the company's recent rapid pace of acquisitions and ever-growing product offerings are some of the largest contributors to the recent spike in R&D. Nonetheless, R&D spending remains the only realistic way for 3-D printing technology to become more competitive against traditional injection molding in a broader scope of applications beyond producing miniature objects.

Going forward, 3D Systems investors shouldn't take management's marketing spin as gospel and should instead focus on how the company is investing in R&D to develop next-generation technology.