The 30 Dow Jones Industrial Average (DJINDICES:^DJI) stocks have everything an income investor might want. The blue-chip index includes a few components with high dividend yields, some with a proven history of growing their payouts like bamboo sprouts, and others with immense room for future dividend boosts.

That's where Pfizer (NYSE:PFE), AT&T (NYSE:T), and IBM (NYSE:IBM) come in. Each of these longtime Dow members represents one of those three essential dividend qualities, though you can argue that there is also some overlap.

Can you guess which Dow stock goes where? Place your bets right now, because here come the answers:

Max headroom: Pfizer
Over the last four quarters, pharma giant Pfizer has funneled just 30% of its earnings and 38% of free cash flow into dividend payments. According to financial data collector Finviz, that's one of the Dow's three lowest payout ratios today.

In short, Pfizer has enough financial headroom to nearly triple its dividend payouts without taking on debt or digging into cash reserves.

Pfizer's payout ratio looks even roomier if you compare it to fellow Dow stock and drug developer Merck (NYSE:MRK), whose dividend policy skims much closer to the cash ceiling. You could even argue that Merck can't afford its current dividend checks, let alone raising its payouts any further. Furthermore, this state of affairs is not new -- Merck's payout ratios have been much higher than Pfizer's for several years now: 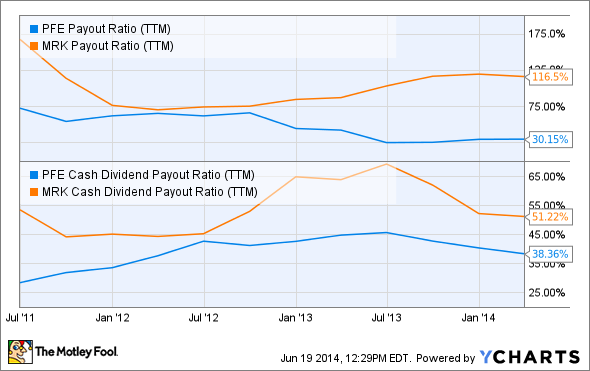 On the face of it, both Pfizer and Merck might seem like perfectly reasonable dividend plays with yields north of 3% each. And you could dock points off Pfizer's policy for having committed the cardinal sin of reducing payouts in 2009. The $68 billion Wyeth buyout forced Pfizer's hand into protecting its cash capital. At roughly the same time, Merck paid $41 billion for Schering-Plough, but decided not to touch the dividend policy.

It's quite possible that Merck couldn't afford to conserve its payouts, and only kicked that decision a few years down the road. I'd hate to be a Merck shareholder if and when that happens.

But Pfizer took its bitter pill right away, and its shareholders face the far happier alternative of having a positive catalyst hanging in the air. Pfizer could very well afford to increase its payouts by a large amount, and share prices often rise dramatically when a proven income stock makes that kind of move.

King of the hill: AT&T
OK, this one is easy. No Dow stock can top AT&T's generous 5.2% yield today, and this stock has been among the index's strongest yielders for decades.

So if all you want is a juicy effective dividend right now, AT&T is your Dow stock. Simple as that.

But the story changes if you were hoping for healthy dividend growth, too. Even Pfizer has grown its payouts faster than Ma Bell over the last decade, including the 2009 payout cut. Pfizer's payout per share has increased by 53% in 10 years for a 4.3% average annual boost. AT&T's progress has been steady but slow, rising just 3.9% a year for a total increase of 47%.

And if you were hoping that Ma Bell might loosen her tight dividend purse strings, I'm afraid there's more bad news. The company already diverts 74% of its free cash into writing dividend checks, leaving little room for big improvements. If that weren't bad enough, think about AT&T's love of enormous buyouts. One proposed $39 billion takeover failed in 2011, and now there's an even bigger $48.5 billion buyout on the table.

If the DIRECTV deal works out as planned, AT&T won't have much dividend-boosting cash left between its couch cushions. And if it fails, I'd anticipate another big, splashy buyout announcement in a year or two. Dividend increases are simply not a priority for AT&T.

Growing pains: IBM
If it's big dividend growth you're after, give Big Blue a closer look.

Consider this chart, and tell me which Dow stock you'd buy if your portfolio is thirsty for some demonstrated dividend growth: 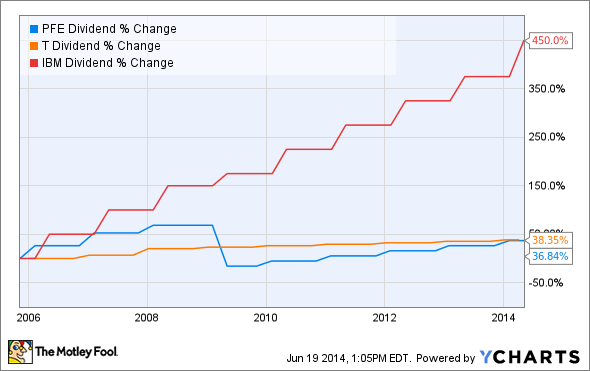 Nobody's perfect, and even IBM's dividend policy comes with warning flags. With a 245% cash payout ratio, IBM spends way more than its trailing free cash flow on dividend checks. And that's before sending even more cash into share buybacks.

IBM doesn't play it safe. The company is known to take on brand new billion-dollar debt solely to finance its buyback and dividend policies.

On top of this capital-intensive strategy, IBM is going through a big strategy shift that puts even more pressure on its cash flow.

Buying IBM right now is sort of a turnaround bet. Ultragenerous dividend and buyback budgets form the gravy on top. 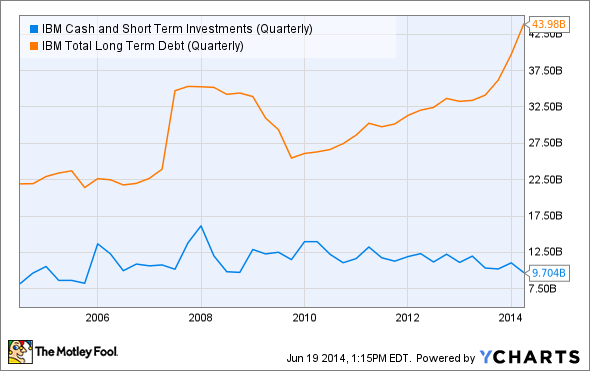 It's not a risk-free strategy. IBM is racking up big debt balances here, and CEO Ginni Rometty's cloud computing strategy really needs to pay off before debt holders come knocking.

The long-term return will be huge, and boosted even further by the debt-powered dividends. But, that's only if IBM is headed down the right path. I happen to believe in IBM's big-picture strategy, and if nothing else, this company has survived for 100 years by adapting to a variety of sea changes. However, I haven't seen a "safe bet" in business since that nice young man sold me a bridge in New York for pennies on the road-toll dollar. Still waiting for the deed papers, but the check I sent him cleared in 1982.

All things considered, I see IBM as the juiciest dividend payer on the Dow today -- but with a substantial debt risk on the side. Pfizer offers a balance between low risk and respectable returns. And I wouldn't touch AT&T's giant dividend yield with a 10-foot pole, because shareholders rank pretty low on this company's list of cash allocation priorities.