Like most sports leagues, the biopharma industry is rife with copy-cats. When a drug sells well, you can rest assured someone is trying to come up with a rival or formulate a generic.

Jazz Pharmaceuticals (NASDAQ:JAZZ) is a Dublin-based orphan drug specialist whose shares have risen an eye-popping 115% in the past year. This stellar growth in is not without merit, however.

Jazz's growth as been propelled mainly by the double-digit growth of its top two commercial products Xyrem and Erwinaze. And despite a skyrocketing share price, short-sellers have largely left the company to its own devices, suggesting a fair amount of market optimism about the stock's share price. 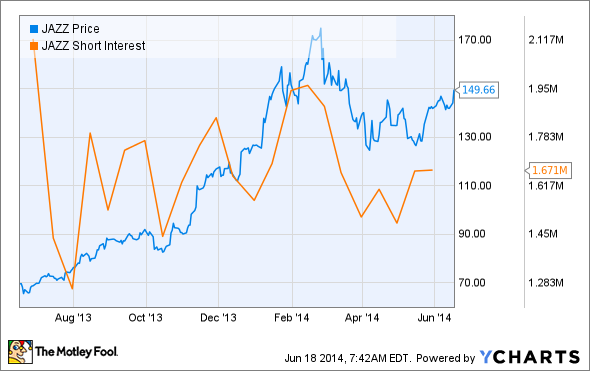 What's essential to understand is that Jazz relies heavily upon Xyrem for top-line growth, as the drug presently accounts for 65.8% of total net product sales. Even so, there are two serious threats to Xyrem's growth prospects that are perhaps going unnoticed by the wider market.

Generic competition may come much sooner than anticipated
Although Jazz holds a series of patents for Xyrem that don't expire until 2019 to 2024, that hasn't stopped generic drugmakers from trying. In 2010, Roxane submitted an ANDA to the Food and Drug Administration requesting approval to market a generic version of Xyrem. Roxane's argument is largely that Jazz's patents for Xyrem are invalid. Jazz subsequently filed a lawsuit against Roxane as an attempt to block the entry of a generic.

Fast-forward to today, the case is still unresolved, and two additional companies have filed ANDAs for generic versions of Xyrem. Sifting through this legal mess, what's important to understand is that a trial could be held as early as the fourth quarter of this year. Given that the FDA has refused Jazz's petition to deny further ANDAs from being reviewed by the agency, this case is an important issue to keep tabs on going forward.

A serious rival formulation is showing promise in clinical trials
Generic rivals for a drug still under patent protection are one thing. But a rival with a better dosing regimen and similar clinical outcomes is another issue altogether.

Little-known French biopharma Flamel Technologies (NASDAQ:FLML) has been busy developing an alternative treatment for nacrolepsy based on its Micropump technology. Presently, Xyrem is dosed in two stages: once before bedtime and again 2.5 to 4 hours later. What this means is that you may have to wake up to take the second dose, interrupting nighttime sleep.

The goal of Flamel's Micropump approach is to deliver a dose of sodium oxybate (Xyrem) in a manner that would allow it to be taken only once. Although the company is still in the early stages of developing this technology, Flamel believes it could push it into a registration study by 2015.

Since Micropump has already been validated in other drugs, and the primary goal will simply to be to deliver a more efficient dose of sodium oxybate, Jazz shareholders should definitely keep a keen eye on this device as it progresses in clinical studies.

Foolish wrap-up
It's commonplace for generic drugmakers to challenge the patents of highly successful drugs like Xyrem. And most of the time, they fail to make headway in invalidating the drug's patents. I suspect Xyrem's patents will hold up to legal scrutiny, which is why shorts haven't bothered to show much interest in this stock. That being said, Flamel's approach does pose a more serious threat to Xyrem's commercial success and could be on the market as early as 2016 if the drug posts strong data (remember, it's still early stage). As such, I think investors with a long-term outlook should pay special attention to Jazz's plans to further diversify its revenue stream in order to become less dependent on Xyrem moving forward.