SodaStream (NASDAQ:SODA) stock is down by nearly 47% over the last year, as the company is delivering disappointing financial performance and faced with investor concerns about the partnership between Coca-Cola (NYSE:KO) and Keurig Green Mountain (NASDAQ:GMCR.DL) to compete in the home soda business.

However, SodaStream has the strength to overcome its challenges, and the stock is now attractively valued. Is the dip in SodaStream a buying opportunity?

Competitive challenge
Coca-Cola has bought a 16% stake in Keurig Green Mountain, and the two companies are collaborating in the development and introduction of Coca-Cola's products for use in Green Mountain's forthcoming Keurig Cold machine.

Coca-Cola is the undisputed global leader in the soft drinks industry, and it has unparalleled brand power and abundant financial resources to invest in areas such as marketing and advertising. Keurig Green Mountain is a successful pioneer in the home coffee business, so this alliance brings two powerful players into competition against SodaStream.

This is clearly an important risk to monitor in the medium term. However, SodaStream has the first-mover advantage in the home-carbonation industry, and the company has positioned itself as a healthier, lower-cost, and more environmentally friendly alternative to traditional soft drinks.

Coca-Cola is unlikely to compete on the low end of the pricing spectrum, since the company must avoid cannibalizing its traditional business too much, which would likely generate conflict with its bottling partners. Besides, soda consumption is under heavy pressure lately, as consumers tend to prefer healthier alternatives with lower calories and more natural ingredients.

If SodaStream can sustain its competitive differentiation versus traditional soda brands, it could even benefit from the entrance of Coca-Cola and Keurig Green Mountain into the business. Increased advertising spending and attention from customers could be a plus for SodaStream.

Total sales during the quarter ended on March 31 were almost flat, at $118.2 million versus $117.6 million in the first quarter of 2013. However, performance was remarkably uneven across different geographies.

While sales in the U.S. declined 28% year over year, revenue in Western Europe increased by 17%, sales in the Asia-Pacific region grew 28%, and Africa delivered a revenue increase of 34%.

This indicates that SodaStream´s problems were clearly concentrated in the U.S. during the quarter. If the company can improve performance in the country as inventories decline to equilibrium levels, total sales growth should accelerate considerably over the medium term.

In addition, first-quarter carbonator sales in the U.S. increased 27% to a record 1.4 million units. Demand for carbonators is driven by usage of the systems, and system sales don't vary much during the holidays, so strong demand in that category could show that overall system demand problems in the U.S. were mostly due to weakness during the last quarter of 2013 and the remaining excess inventory.

SodaStream's difficulties also seem to be already reflected in current market valuation. When looking at ratios such as P/E and forward P/E from a historical perspective, SodaStream is trading at an attractive entry point while offering material upside potential if things turn for the better in terms of sales and overall financial performance. 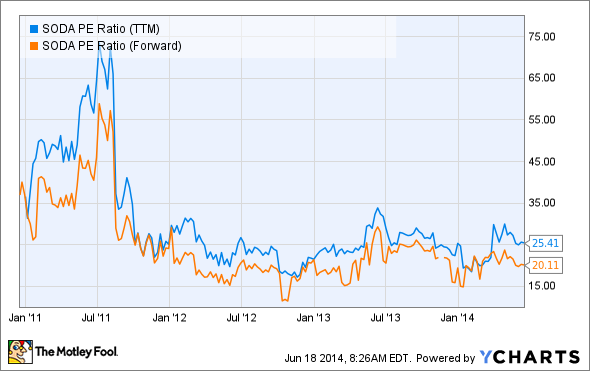 Foolish takeaway
While Coca-Cola and Keurig Green Mountain will represent a serious competitive risk to watch, SodaStream has the strength to compete effectively, and the company could even benefit from their entrance into the industry if it can sustain a competitive differentiation. Falling sales in the U.S. have considerably weighed on overall performance lately, but there are some reasons to believe this could be a temporary problem. Considering its attractive valuation, SodaStream offers substantial potential for gains if things turn for the better in the medium term.