Too little, too late? RadioShack (NASDAQ:RSHCQ) closed Friday with its stock below $1 per share, and in trading today it's fallen another 10%. As the electronics retailer scrambles to put together a package of turnaround strategies to convince consumers it remains a viable retailer, the future of The Shack as a publicly traded company remains in doubt.

Earlier this month RadioShack reported earnings that show the monumental task confronting it. Revenues fell 13% to $736.7 million as comparable-store sales tumbled 14% from last year. Losses quadrupled year over year, hitting $98.3 million, or $0.97 per share, nearly double the $0.52-per-share loss analysts had been expecting. Limited by its lenders in how many stores it can close, the electronics store has had to dramatically scale back the planned closures from 1,100 to maybe 200. 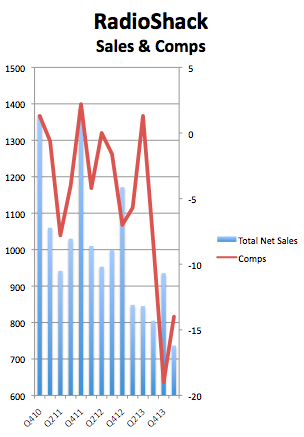 The greatest failure lies in management's past insistence on clinging to the overly used path traveled by rivals: relying on smartphone sales to dig it out of its hole. Instead, RadioShack's dug down deeper. Consumers, said CEO Joe Magnacca, had no interest in the models his company was selling. "In particular, our mobility business was weak due to lackluster consumer interest in the current handset assortment and increased promotional activities across the industry including the wireless carriers."

When Best Buy reported earnings last month, its sales were down over 3% as comps fell 1.9%. Its CFO said the mobile phone market, which along with computers accounts for nearly 50% of the superstore's revenues, wasn't going to be strengthening anytime soon because consumers were waiting for new models to come out.

With Best Buy's large presence in the market, the carriers themselves selling phones, and other retailers piling in as well, the opportunity to break even -- let alone make a profit -- is marginal at best. RadioShack needed some new ideas, and while it suddenly seemed to have a light bulb go off over its head several times over the past few weeks with some creative solutions emerging, it may not be enough. The effort may not be as dramatic as it needs to be to offset the very large, extended investment the retailer made in these failed policies. And having piled debt on, the tab may be too high to pay off.

The company recently formed RadioShack Labs, which entered into a partnership with PCH International to bring products from innovative start-ups to its stores and give them marketing promotion along with a retail and online presence. It will also begin offering in-store, same-day repair service for smartphones, tablets, and other mobile communications devices. While that still sounds like it's tied to the past, it represents an innovative way to tackle the same problem.

Had RadioShack chosen to do these types of things earlier, the problem might not be so acute now. But it's quickly burning through cash, and bankruptcy is a real possibility. While its stock would have to trade below the $1 threshold for 30 consecutive days before the NYSE would move to delist its shares from the exchange, it would still have time to remedy the offense, such as with a reverse stock split.

A few years back I thought RadioShack had perhaps seen its last days, and while it's lasted longer than a few of the other investments I called out at the time (such as Borders and Blockbuster), the fact that it's fallen so far, so fast indicates its time may soon be over. It just goes to show, sometimes late is worse than never.