If you can make it in New York, you can make it anywhere, to paraphrase a popular song. SL Green Realty (NYSE:SLG) and Vornado Realty Trust (NYSE:VNO) take that to a whole new level, and they are increasingly focused on Times Square.

The Big Apple
According to SL Green Realty, New York City is second only to Houston in the number of jobs recovered since the nadir of the 2007 to 2009 recession. The city is expected to set new records for jobs and, more specifically, office jobs this year. Further increases are expect in 2015. That makes the Big Apple a pretty vibrant market.

It's no wonder that SL Green Realty essentially focuses all its efforts on the New York City market and why Vornado Realty Trust splits its efforts between New York City and Washington D.C. (For reference, Washington D.C. comes in at number four for the number of jobs recovered since the recession.) Both are intent on continuing to expand in "the city that never sleeps."

A relative bargain...
That shouldn't come as a surprise based on the strength of the New York market, but as an investor, you know that a good company (or property, in this case) doesn't make a good investment unless you get a good price. However, compared to key cities globally, SL Green Realty says New York City is cheap. For example, when it comes to office rents per square foot, New York doesn't even crack the top 10 globally.

London's West End, for example, is over $100 more per square foot than the $75 per square foot that Midtown South in New York City commands. Heck, even India has more expensive rents than New York City, with Delhi coming in at number 10 on the top 10 list at $81 a square foot. No wonder SL Green just spent $41.1 million dollars to buy 719 Seventh Avenue in the Times Square area.

A few years ago Vornado agreed to a 20 year lease for the Marriott Marquis Times Square hotel. It's currently spending big bucks to upgrade the property. Oh, and that lease comes with an option to buy what is a premier property in the center of the so-called Crossroads of the World.

The interesting thing about both deals is the money being spent on upgrades. Vornado Realty Trust, for example, is in the middle of an overhaul that's likely to cost more than $100 million. And that's on a building it doesn't even own yet. SL Green Realty, meanwhile, plans to demolish the $41 million property it just acquired—that's some price tag for a tear down!

Is this good business?
It's clearly risky to focus so much effort on a single city (or two in the case of Vornado Realty Trust). However, SL Green's top line has gone up in nine of the last 10 years. The only drop came in 2009, the tail end of the recession. Dividends, meanwhile, have been on the rise since 2010 after being trimmed during the economic downturn.

Vornado Realty Trust, meanwhile, hasn't been as strong on the top line, with drops in each of the last three years. So much for the benefit of diversification... since Vornado Realty Trust splits its efforts between New York and Washington D.C. That said, the true measure of a REIT is its dividend. On that front, Vornado Realty Trust increased its dividend last year after keeping it steady in 2011 and 2012. That's a good sign, particularly since the distribution was cut during the recession. 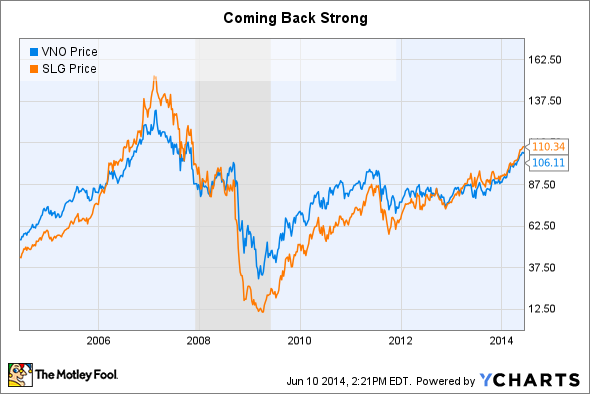 There's no guarantee that New York City will remain a vibrant city but it would be surprising to see it fall into 1970s like disrepair again any time soon. Being focused on just one market is a risky proposition in many ways, but sharpshooters like SL Green and Vornado Realty Trust have been doing a good job of buying and upgrading the right properties. While both landlords took a hit during the recession, their recoveries are still going strong backed by an increasingly healthy Big Apple.