The Dow Jones Industrial Average (DJINDICES:^DJI) fell 11 points into the red in Tuesday afternoon trading, retreating from the 17,000 mark after a positive morning session. The S&P 500 (SNPINDEX:^GSPC), meanwhile, touched an intraday record and was about 35 points away from passing 2,000 for the first time.

A healthy boost from housing
Offering a nice boost to the markets today, the Commerce Department reported that  new single-family homes sold at a 504,000 seasonally adjusted annual rate in May, versus an expectation of just 440,000.

This seasonally adjusted number represents a near-19% increase from May 2013, and also a six-year high.

Figures released yesterday showed that existing homes sold at a 4.89 million seasonally adjusted annual rate in May, up 4.9% from April but 5% below May 2013's number.

This reduced volume is causing a slight rise in the available inventory of existing homes, but inventory levels are still within reasonable levels relative to total sales. 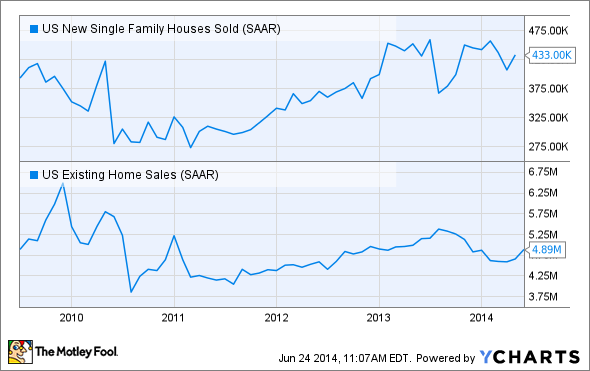 Note: At the time of this writing, YCharts data has not yet been updated to reflect this mornings new home sales data.

Months' supply of inventory is a convenient metric to compare the relative levels of inventory and sales, and to identify shifts in the market and possible bubbles. This number represents the number of months it would take to sell all of the current inventory if sales remain constant.

The market currently has a healthy 5.6-month supply of inventory of existing homes, down from 5.7 months in April. This level is another indication of the housing market's continuing recovery.

The median price for existing homes sold was up 5% year over year in May.

Intel continues to climb
Intel (NASDAQ:INTC)was up 1.7% to lead the Dow in early afternoon trading. The stock has been on a tear since the chipmaker earlier this month raised its guidance for the second quarter and full year.

The spike today marks a 10-year high for the company, and would be a new record if not for the frothy valuations back in the late '90s tech bubble. 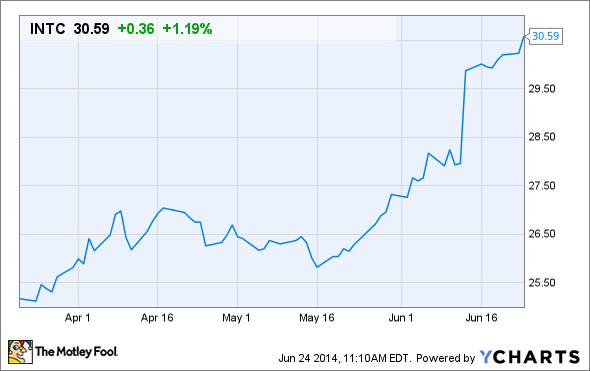 Management raised guidance expectations based on better than expected PC sales to businesses. The company also expects that revenue will grow in 2014, instead of previous expectations for flat sales.

This recent strength has some analysts and advisers concerned that investors may be buying into the short-term hype a little too much.

Why? Because the increase in business PC sales could be attributable to Microsoft's (NASDAQ:MSFT) recent end of support for its Window's XP operating system. Many businesses are upgrading their computers today to newer software that requires improved hardware. This bump in sales in inherently finite.

The risk is that after this pent-up demand works its way through the market, the status quo of middle single-digit PC sales growth will return. When that happens, the 21% increase in Intel's valuation over the past three months may not seem so reasonable anymore.

For example, Intel's price-to-earnings ratio has boomed from 13.5 times to nearly 16.5 times as the markets adjust for higher future earnings expectations. If those extra business PC sales turn out to be a short-term phenomena, it would not take much for Intel to plunge back to the 13-14 times earnings range -- or lower.

Whether it's housing or Intel, these short-term gyrations are examples of why investors should always keep the long view. There are long-term changes happening in both housing and in the tech world. Housing is still recuperating from the Great Recession, and the markets continue to grapple with the long-term balance between supply and demand.

For Intel, the chip and server space is becoming increasingly competitive and commoditized as seemingly everyone in the business races to "the cloud" and the desktop PC becomes increasingly obsolete.

Big changes over the long term often mean volatility in the short term, and where there's volatility, there's risk and there's opportunity.