Mergers and acquisitions have been the hot trend in health care's 2014, with company after company upping the ante with larger and larger deals. Yet one of M&A's biggest names has sat on the sidelines so far this year: Danaher (NYSE:DHR), a stock that has reaped huge rewards for investors in the past but has waded through the first half of the year to the modest tune of a 5% year-to-date gain.

It's a notoriously quiet stretch for this notable dealmaker. As Bloomberg reports, Danaher's last deal worth a half-billion dollars or more came back in 2012, and the firm's overall annual revenue growth has fallen to the slowest pace in years. Meanwhile, hard-charging rivals such as Thermo-Fisher Scientific (NYSE:TMO) and upstarts like Illumina (NASDAQ:ILMN) threaten to tilt the diagnostics landscape in their favor.

Yet Danaher may only be gearing up for a big bounce-back in the M&A arena. Company leadership's indicated that the conglomerate could have up to $12 billion on hold for the right acquisition, per Bloomberg. Danaher's diagnostics business is one of the tops in the industry, and with medical device giants making moves to beef up their portfolios, will this company be the next to impress shareholders with a market-shaking buy?

Is a big deal a big need?
Danaher's a major player in what's become a crowded and competitive diagnostics niche. The conglomerate's Life Sciences and Diagnostics business is its largest unit by revenues by a significant margin: The group's revenues of more than $6.8 billion in 2013 was around double the sales of Danaher's next-largest unit, its Industrial Technologies division. Add in Danaher's prowess in the Dental industry, and this is a company vested heavily in the health care field.

Yet growth has ground to a halt alongside Danaher's lack of M&A action. The company's diagnostics division saw growth of just around 5% last year after boosting its unit's revenues by more than 40% year over year in 2012. Danaher's $6.8 billion acquisition of Beckman Coulter back in 2011 was a big part of that jump as the company looked to capitalize on aging populations in the western world that will drive health care business higher.

That acquisition has proven a big success for Danaher so far: The company's diagnostics business has seen its operating margin skyrocket by a full six percentage points between 2011 and 2013, and it has posted the fastest operating profit growth among any of Danaher's businesses.

However, the competitive field isn't slowing down for Danaher and its investors. Diagnostics rival Thermo Fisher Scientific has been on a tear around the market lately, outperforming its top challengers over the past year. 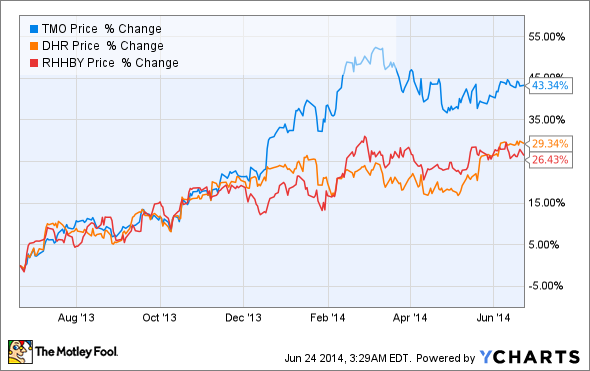 Thermo Fisher's struggled for organic growth just as Danaher did in 2013, but the company's taken a head-first dive into the M&A pool to keep up. The diagnostics giant acquired Life Technologies last April for more than $13 billion in order to push into genetic diagnostics, a hot field that has seen the rise of upstart-turned-diagnostics-superstar Illumina. Illumina's pioneering of the $1,000 human genome lit off a fire under this stock as investors rallied behind the company's push to lower the price around gene sequencing. Genetics has emerged as a big area of focus in personalized medicine for individual patients, and Illumina -- along with Thermo Fisher following its purchase of Life Technologies -- have taken the lead in the early goings.

Although Illumina's a much smaller company by market cap than Thermo Fisher, Danaher, and other giants such as Roche, the company's climb over the past year makes it a rising competitor that could create long-term trouble for the power players in diagnostics. If Danaher wants to keep up, it'll need to come up with more than its plodding organic growth from 2013 to impress investors and rejuvenate this stock.

Can Danaher make a move?
Credit Danaher for poking around the M&A space already in the past year. The company was one suitor that sniffed about Johnson & Johnson's sale of its blood diagnostics unit last year. While J&J ultimately sold its Ortho diagnostics business to the Carlyle Group in January, Danaher still has plenty of options if it wants to make a big splash.

Agilent Technologies (NYSE:A) has been the hottest name thrown around an M&A candidate for Danaher. While the company's current $19 billion market cap looks too hefty for the conglomerate to snap up, Agilent's preparing to split its business in two, with one company dedicated to life sciences and diagnostics (under the Agilent name) along with chemical analysis, while the other will carry on the company's electronics business.

Agilent's chemical analysis business isn't the most attractive in terms of growth, but the company's life sciences group, which is significantly larger than the analysis group in terms of 2013 revenues, has performed pretty well. The unit recorded double-digit net revenue growth in each of the last two years and has boosted its operating margin by more than one full percentage point in both the 2012 and 2013 fiscal years as well. Danaher could use the growth boost -- and the nearly $4 billion in sales from the two businesses combined would cement the conglomerate's status among the top-tier players in the diagnostics industry.

Danaher might have another interesting opportunity with a struggling giant across the Atlantic, however. German conglomerate Siemens (OTC:SIEGY) has struggled with meeting its profit projections. According to a report from Bloomberg Businessweek, the company in March had poked around a potential sale of its microbiology business, part of Siemens' larger diagnostics unit.

Yet Siemens, under its new organization plan that it unveiled in May, is planning to manage its health care unit separately from its other segments under its corporate umbrella. With the company investing heavily into energy -- Siemens made a sizable bid for French company Alstom's energy unit that General Electric snapped up for $17 billion -- it might be a good time for Siemens to slim down and . More broadly, the conglomerate's diagnostics division racked up $350 million euros -- or more than $475 million -- in profit last year. Overall, Siemens' diagnostics division hauled in more than $5 billion in revenue in its last fiscal year. Given the reported size of Danaher's war chest, convincing the restructuring and profit-hungry Siemens to sell off this division would add a huge boost to Danaher's annual sales and would make up in a big way for missing out on the acquisition of Johnson & Johnson's similar Ortho diagnostics business.

The bottom line
Danaher certainly doesn't have to make a move: After all, while this stock has churned along slowly in 2014, shares have still gained for investors. Even without a major move, the company still managed more than 4% overall revenue growth last year. However, if Danaher wants to impress investors, return to stronger growth, and keep its diagnostics unit among the best in the health care field, a well-timed acquisition -- whether it's post-split Agilent, Siemen's diagnostics unit, or another opportunity in waiting -- could do wonders for this stock. Given that Danaher's stock is valued below the likes of rivals such as Thermo-Fisher on a price-to-earnings basis, this is one pick that could be an interesting opportunity for investors to dig deeper into a strong business at a good value.

Will Danaher Corporation Bounce Back With a Big Buyout? @themotleyfool #stocks $SIEGY $A $DHR $ILMN $TMO Next Article
Current