Headlines have been buzzing with the news that Williams Companies (NYSE:WMB) is making a partial acquisition of Access Midstream Partners (NYSE: ACMP), and several stories have explored the benefits of the deal. Now that the dust has settled, is this really a cause for celebration?

Initial reaction
On June 15, a Williams press release announced that the company would be acquiring the 50% interest in the general partner and the 55.1 million units of Access Midstream Partners owned by Global Infrastructure Partners II for just under $6 billion in cash. At the close of the deal, Williams would own 100% of the GP and 50% of the master limited partnership, or MLP, units of Access. Williams also proposed a merger between Access and its own MLP, Williams Partners (NYSE: WPZ).

The initial market reaction was positive, but that sentiment soon faded in the two MLP stocks. Williams Companies gapped up from $47 to over $55 and remained there for the rest of the week. Williams Partners jumped from $53 to $57, but fell back to $53 in the following days. Access Midstream Partners had similar action, moving up past $65 initially but soon dropping back below $60. Are MLP investors having second thoughts after the initial euphoria, and if so, why? 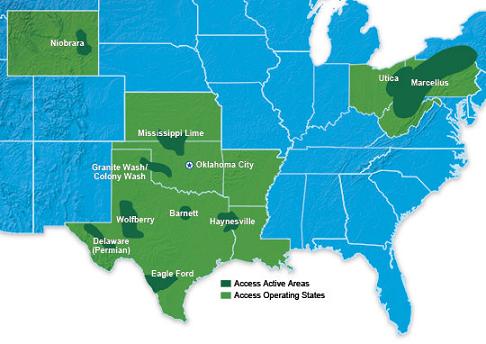 Access is a prize
Let's look at the pros and cons of the deal. On the plus side, dividends from Williams Companies have been rising steadily, as have the distributions from both MLPs. Also, Access is certainly an attractive prize for Williams.

Through its gathering subsidiaries, Access Midstream engages in gas gathering, compression, and treating activities in several key states. As the map shows, the company has assets in these strategic shale regions:

Access has managed its assets wisely, as reflected in its annual revenue growth of 76%, net margin growth from 29% to 31%, and a debt-to-equity ratio of 92%.

Merger concerns
While Williams will clearly benefit from the relationship with Access, the reverse may not be true. Both Williams Companies and Williams Partners have seen revenue declines and shrinking margins in recent years. Furthermore, a look at the EBITDA growth of the three companies tells a troubling tale.

As the above table shows, the only company at this party with growing EBITDA is Access. But Access is much smaller than Williams, raising not only the question of how much Access could really help Williams, but how much Williams could hurt Access. By itself, Access had EBITDA growth of 88% last year, but combined with Williams Partners, that growth would have been 2%.

Should Fools rush in?
Now, this isn't the most sophisticated analysis out there by far. It just looks at basic performance metrics like whether a company is growing its sales, and how skillfully it translates those revenues into profits. Perhaps on deeper reflection, this deal could turn out to be the best matchup since chocolate and peanut butter.

On the other hand, it could be a case of a large, struggling company desperately gobbling up a small, growing, well-managed one. This Fool isn't ready to raise a glass to this deal just yet. Investors may want to wait and see if Williams shows improvement in the direction of its revenue, margins, and earnings. Investors in Access may want to research the consequences of a merger and consider how they'll fare after such an event.

An investor has only so much capital and must allocate it carefully to the stories with the best probabilities of success. There are plenty of companies out there with great metrics, so it isn't necessary to hop into every big new M&A event that comes along.