The U.S. economy shrank far more than expected in the first quarter, for its worst performance in five years. The Commerce Department said on Wednesday that U.S. gross domestic product fell at a 2.9% annual rate to begin the year, compared to the 1% drop reported last month. That steep a revision could indicate that the harsh winter was not alone responsible for the economic freeze. Still, investors have seemingly shrugged off the negative news, sending the Dow Jones Industrial Average (DJINDICES:^DJI) 37 points higher, or 0.22%, as of 1:30 p.m. EDT. Bruce McCain, chief investment strategist at Key Private Bank, offered Reuters his opinion on the situation.

"As long as investors believe the economy will keep growing, and everyone expects growth in the second quarter, the lesser evil will be to buy equities at a modestly higher valuation, since bonds and cash don't represent better values," McCain said.

Long-term investors would be wise to take any three-month economic window with a grain of salt. Instead, keep your eyes open for sound businesses that will remain strong investments over the next decade despite short-term economic ups and downs. 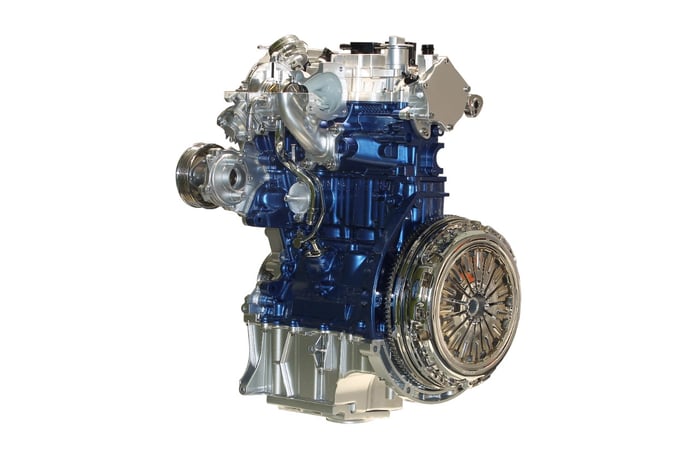 Outside the Dow, Ford (NYSE:F) is making headlines with a new award, while the news continues to get much worse for General Motors (NYSE:GM).

According to a company press release, Ford's 1.0-liter EcoBoost engine was today named the 2014 International Engine of the Year for an unprecedented third consecutive year. If you're keeping track, which would be a challenge, this marks the 13th major award won by this engine.

"This year's competition was the fiercest yet, but the 1.0-liter EcoBoost continues to stand out for all the right reasons -- great refinement, surprising flexibility and excellent efficiency," said Dean Slavnich, co-chairman, 16th International Engine of the Year awards, and editor, Engine Technology International magazine, in a press release. "The 1.0-liter EcoBoost engine is one of the finest examples of powertrain engineering."

Ford's overall marketing for its EcoBoost engine has helped drive a far more green, and fuel-efficient, image that has aided sales. Consider that three of Ford's most popular vehicles, the F-150, Escape, and Fusion, as of late 2013 had respective EcoBoost engine take rates of 42%, 89%, and 52%. Furthermore, Ford's increasingly flexible engine lineup offers more options for consumers to get exactly what they want. For instance, the 2015 Mustang will receive an EcoBoost engine for the first time, which could appeal to a wider car buyer base, while loyal muscle car fans can still opt for the powerful V8 engine.

In other automotive news, Ford crosstown rival General Motors could be receiving much worse news regarding the death count linked to defective ignition switches.

It was initially reported that General Motors knows of 13 people who died in crashes due to the ignition switch slipping out of the run position. However a Wall Street Journal review of accident data suggests that 309 drivers and passengers were killed in accidents when an air bag didn't deploy in a GM model under current ignition-switch recalls. The newspaper's findings suggest another 228 people were injured.

Attorney Kenneth Feinberg has the authorization to set compensation levels on GM's behalf and is expected to outline details of the victims' fund as soon as next week. The General Motors program will be voluntary, and families that accept money from Feinberg's fund will give up their right to sue the automaker. Families can opt not to take compensation and instead sue GM.

It's currently unclear what compensation Feinberg will authorize, though his fund to pay claims related to the Sept. 11 terrorist attacks paid a range from $500,000 to $7.1 million to cover death claims and paid an average of $2 million for injury claims, according to The Wall Street Journal.