The Dow Jones Industrial Average (DJINDICES:^DJI) gained as much as 0.3% in Wednesday's session. Walt Disney (NYSE:DIS) was one of the Dow's biggest gainers. The House of Mouse jumped as much as 1.9% overnight, adding more than 10 points to the Dow's total value.

As a Disney shareholder, I should be delighted to see the stock doing well. Unfortunately, it's rising for all the wrong reasons. All the kudos and/or blame for this paradox go to the U.S. Supreme Court.

The high court today ruled on the case of American Broadcasting Cos. v. Aereo. The justices landed firmly on the side of the broadcasters, concluding with a 6-3 majority that Aereo provides a public performance of copyrighted materials by capturing broadcast signals and offering access to the shows to paying users of the streaming service. Aereo and a plethora of "friends of the court" had argued that each customer had direct access to a distinct antenna, and that it simply shifted the reception of TV services from an antenna on your building to some hardware in Aereo's data centers.

This august institution just put a big roadblock in front of American innovation.

As you might have expected, broadcasters and content producers soared in unison on the SCOTUS decision. Burning the production/distribution candle at both ends, CBS (NASDAQ:VIAC) gained as much as 8.3% on the news. You've already seen how content producer Disney maxed out at 1.9%, while broadcasting specialist Time Warner Cable (NYSE: TWC) rose as much as 1.7%. See if you can spot the exact time of the SCOTUS decision in this chart: 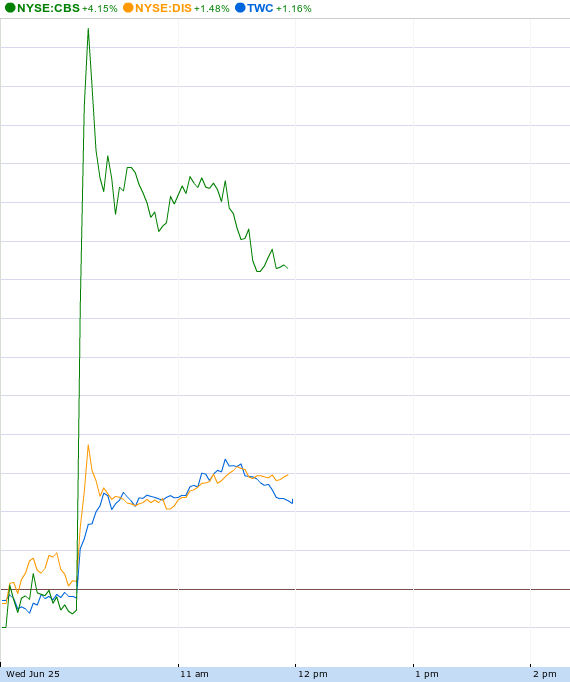 The verdict puts the kibosh on Aereo's retransmission operation, possibly killing the business outright. The company, backed by media magnate Barry Diller, has consistently said that it has no Plan B. In an interview with CNBC today, Diller waved the white flag: "It's not a big [financial] loss for us, but I do believe blocking this technology is a big loss for consumers." He added: "We did try, but it's over now."

Scalia noted similarities to the famous Sony Betamax case of 1984, which came within one SCOTUS vote of "declaring the VCR contraband."

Three decades ago, broadcasters argued that the ability to record TV content at will would destroy the broadcasting system. (Spoiler alert: it didn't. Neither did digital video recorders nor video-on-demand services.) "The Networks make similarly dire predictions about Aereo," Scalia wrote in dissent. "We are told that nothing less than 'the very existence of broadcast television as we know it' is at stake."

Just like in the Betamax case, the court is essentially being asked to predict the impact of technologies not yet invented. Unfortunately, Scalia's crystal ball needs an oil change and new spark plugs, so that wasn't possible in this case.

In conclusion, Scalia quoted the Betamax takeaway directly: "It may well be that Congress will take a fresh look at this new technology, just as it so often has examined other innovations in the past. But it is not our job to apply laws that have not yet been written."

All Aereo did was to put your rabbit-ear antennas in a central location with strong reception, and then serve it up to your devices of choice via bog-standard Internet links. The legal requirement of giving each subscriber a unique reception pathway resulted in downright crazy antenna arrays, when a handful of central antennas could easily serve the same purpose, but that's just Aereo bending over backward to comply with long-since outdated broadcasting rules:

One customer, one antenna. A thousand customers, a thousand antennas. You get the picture. Source: Aereo.

This decision tramples all over innovation in defense of aging business methods. What if Disney, or CBS, or maybe even Time Warner decided to provide online access to their content flows in the future? Replacing dedicated TV signals with simple Internet feeds seems like the best way forward, and could eventually free up enormous vistas of TV signal bandwidth for new purposes. From this perspective, Aereo was simply beating a path for others to follow.

But that door just closed in a big way. Even Disney would run into legal trouble running that kind of new-age service now. And under this framework, Comcast's (NASDAQ:CMCS.A) TV Everywhere seems open to legal challenges.

The prevailing justices argued in their ruling that shutting down Aereo won't harm innovation in any way: "We agree that Congress, while intending the Transmit Clause to apply broadly to cable companies and their equivalents, did not intend to discourage or to control the emergence or use of different kinds of technologies. But we do not believe that our limited holding today will have that effect."

Sorry, but I disagree. This SCOTUS ruling is a big step backward for consumers, for inventors, and for new media business models in general. And I say that as a Disney shareholder, who's supposed to pop a champagne cork today.

That bottle is going back in the wine cellar. There's nothing to celebrate.