Bullish sentiment reasserted itself on Wednesday, as the Dow Jones Industrials (DJINDICES:^DJI) posted a 30-point advance as of 12:45 p.m. EDT. Surprisingly, traders ignored some signs of economic weakness in bouncing back from a larger drop Tuesday, following a pattern that has repeated itself countless times over the course of the 5-year-old bull market. But Nobel Prize-winning economist Robert Shiller sounded an alarm about the high levels of the stock market, suggesting that today's high valuations using his cyclically adjusted price-to-earnings, or CAPE, ratio could point to bad performance for the Dow Jones Industrials in the future.

What the CAPE is saying

The idea behind Shiller's CAPE measure is pretty simple. If you follow standard earnings multiples, they're typically based on a single year's worth of earnings. As a result, earnings can fluctuate dramatically from year to year, making valuations seem to be rising or falling even when the share price stays constant. One particularly good example of this phenomenon from the Dow Jones Industrials is Travelers (NYSE:TRV), which can see particularly volatile swings in earnings depending on whether catastrophic events happen. What the CAPE does is take 10 years of earnings, letting those short-term bumps smooth into a more representative sample encompassing entire business cycles for most industries.

To get a sense of Shiller's worries, take a look at the following chart: 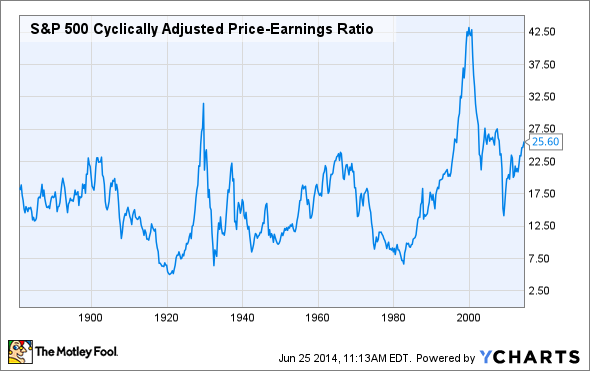 As you can see, the CAPE ratio has climbed back to levels higher than it has seen during almost all of the period over which Shiller has made measurements. Specifically, figures higher than the current CAPE reading have occurred only in the lead-up to the Crash of 1929, the Go-Go Market period of the 1960s, the tech boom of the late 1990s, and the housing boom in the mid-2000s. By that argument, Shiller believes the Dow is in danger of a drop similar to what the market experienced after those previous periods.

The big assumption CAPE makes
In choosing a 10-year period, the CAPE model figures that a decade is long enough to represent a typical series of ups and downs for the economy as a whole. Yet the depth of the financial crisis calls that assumption into question.

In particular, earnings for the S&P 500 (SNPINDEX:^SPX) during the financial crisis dropped to a degree not seen since the Great Depression: 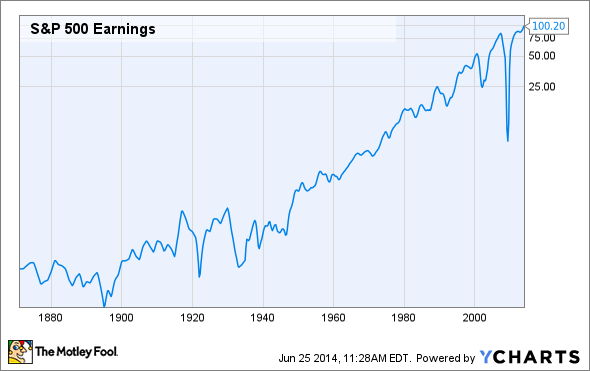 Those who don't believe the CAPE model reflects current overvaluation question whether those earnings declines were consistent with ordinarily cyclical behavior. If they represent a 50-year to 100-year event, as the historical data suggest, then a 10-year CAPE would distort its measure of "cyclical" earnings lower, making the valuation seem higher.

As a result, whether the Dow Jones Industrials are overvalued isn't as clear as Shiller's analysis makes it seem. Moreover, by the end of the 2010s, when the 2008-09 earnings dip is no longer included in the 10-year back-looking period, the CAPE will fall even if stocks hold onto their gains. That doesn't mean that Shiller is wrong that a market pullback could come sooner than later, but it's not the slam-dunk conclusion that you might think based solely on the CAPE ratio's level.