One thing that makes bank investors nervous is heavy concentration in one particular industry or area. And New York Community Bancorp (NYSE:NYCB) does just that, with almost two-thirds of its $34 billion worth of loans falling into one bucket.

But a dive into the business shows that while this may raise eyebrows at first glance, it isn't something investors should be overly concerned about.

A quick glance at the loans of New York Community Bancorp relative to similarly sized Huntington Bancshares (NASDAQ:HBAN) reveals both how concentrated it is and also how unique it is in the composition of the loans: 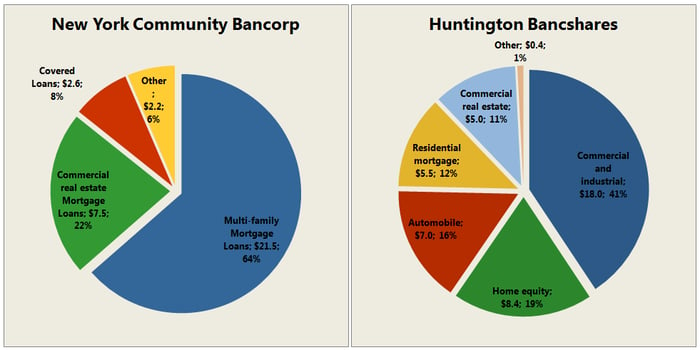 As you can see, the two largest loan classes of New York Community Bancorp represent more than 85% of its loans, compared to the two largest commanding 60% at Huntington Bancshares.

Those types of loans at New York Community Bancorp are also very specifically tied into one industry, with both being mortgage loans for properties. And not only are they one type, but they find themselves in one area, with more than 90% of its $21.5 billion in multi-family mortgage loans -- those made to buildings with more than four units -- in the New York metro area.

So, with all of that in mind, it's natural to think the risk posed by New Community Bancorp is significantly greater than Huntington Bancshares and other regional banks because of its high concentration.

Diving into the loans
Even though the concentration in one area seems risky, New York Community Bancorp actually focuses on rent-regulated buildings. New York City has regulation that causes more than 60% of the buildings in the area to have below-market rental rates. As a result, these buildings are less susceptible to risks posed by broader economic downturns, as tenants are less likely to leave.

But not only do these loans pose less risk thanks to the quality they offer, but they also have extreme cost advantages for New York Community Bancorp as well.

When discussing them at a recent investor conference, Joe Ficalora, the CEO of NYCB, noted that since multi-family loans represent apartments, "these loans are less costly for us to originate than thousands and thousands of one-family loans." And with there being fewer loans issued, the costs of serving the loans is also lower.

This explains why the bank is able to maintain such a phenomenally low efficiency ratio -- which in effect measures the cost of each dollar of revenue -- it stands at 45% in the most recent quarter, compared to the bank and thrift average of 66%.

But of course, at times, things can sound less risky than they actually are. Yet investors should relax a bit when they consider how few of its loans the company had to charge off in some of the most tumultuous financial times: 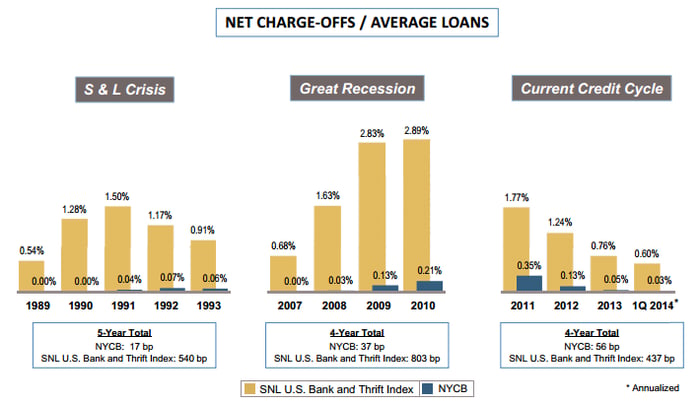 Looking ahead
As we consider investments in financial institutions, one area of focus must be the risk it poses from the loans it issues. And while diversification is often a key way to minimize risk, in the case of New York Community Bancorp, it turns out it concentration in one highly profitable area has been a key to its success.